One day in 2019, back when crossing state lines to go caving seemed perfectly safe, I drove eight hours from Arkansas to central Tennessee and soon found myself in a muddy belly crawl. Pushing a cumbersome pack in front of me, I used my toes to inch forward. Four younger cavers ahead had exited the tunnel and stood comfortably in a large passage, waiting to continue in the 15-mile-long system.

As a bookish professor who had recently turned 60, I felt it reasonable to pause and catch my breath before joining them; it had been a year since my last crawlway. I studied the limestone inches from my face. Even a muddy, featureless tube teems with life in a Southern cave, if you look carefully. I spotted a nickel-size, cave-adapted springtail, the insect’s body translucent in the light from my helmet lamp. Nearby were brownish cave crickets, clumped together on the ceiling. In a wide crack just beyond my head lay a shadow shaped like the letter “S,” darker than the blackness of the cave.

I removed my helmet to light the shadow. A galaxy of white dots glowed against a black background. I was looking at a slimy salamander, specifically Plethodon glutinosus, the northern slimy salamander. Its shimmering black eyes studied the intrusive light, its head broad and somehow childlike relative to its amphibian body. It occurred to me that this was probably the species DreamWorks artists had used as inspiration for their cartoon dragons. Slimies travel back and forth from cave to forest — a sign that I was still relatively close to the entrance. 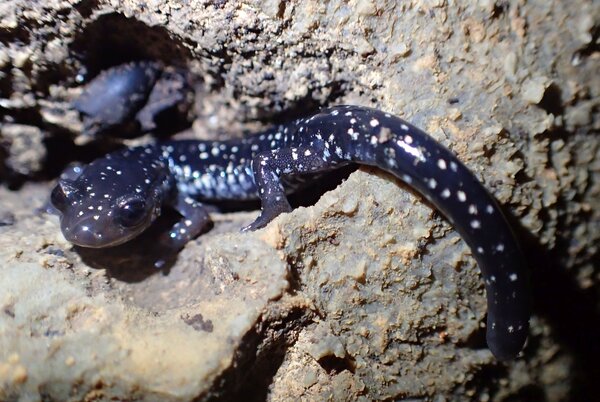 Restored by nature, I put on my helmet and left the salamander to its dark crack. I wriggled onward to the walking passage and a pleasant day underground. Later our team spotted a pure white cave-adapted salamander stalking the floor of a hidden pool, ghostlike on spindly legs. Hatchlings flitted about like flakes in a snow globe. I was glad the cave’s private landowner allowed very few visitors to intrude upon this delicate realm.

The day before the presidential election, I was reminded of this trip by a photo on Facebook. Taken by Bradley Jones, an Alabama caver, it showed a half-dozen slimy salamanders clustered on a limestone wall in Butler Mountain, north of Birmingham, Ala. Mr. Jones said he had seen over 50 at the site. He has been documenting salamanders, springtails, various myotis bat species, pseudoscorpions, rare cave flatworms and other creatures in about 20 caves and karst features at the mountain — all of which are threatened by a proposed limestone quarry that would remove the rock enclosing them.

“It’s the most beautiful area in Jefferson County,” said Mr. Jones, who has discovered and mapped several caves there.

Residents of Clay, population 9,600, in Jefferson County have formed a group opposing the quarry, planned by Vulcan Materials, saying it would destroy not only caves but also a mountainside rich in native hardwoods, wildflowers and waterfalls. A planned October meeting of the City Council was postponed when it became clear that the small meeting space would be overwhelmed by angry residents. They fear that quarry operations would destroy natural habitat and expose nearby schools and homes to harmful blasting and dust.

Mr. Jones has been sharing aerial photographs of a 40-year-old similar limestone quarry on Drake Mountain in Huntsville, Ala. While passing drivers might miss it, from the air the quarry presents a stark white gash in green surroundings, its steep sides darkened by dripping springs — the lifeblood of vanished caves.

“Are we going to let history repeat itself?” he asked in a social media post urging residents to sign a petition against the planned quarry.

The fight for Butler Mountain is one of several small environmental battles playing out throughout the South — fights that tend to go unnoticed amid a frenetic news cycle. A similar dispute rages in Coffee County in Tennessee, where a planned zoning change could allow multiple quarries in hills containing 71 caves and abundant wildlife.

“There’s nothing like going out on the farm and seeing turkey or deer,” said Carol Sandstrom, a resident whose family owns 40 cave-spring-fed acres bordering one proposed quarry site. “It’s our own little nature preserve. The thought of that being damaged breaks my heart.”

My chosen pastime surrounds me with wildlife. At 19, I first traveled to the wild caves of TAG, an acronym for the cave-rich region surrounding the juncture of Tennessee, Alabama, and Georgia. I learned that surface pollution becomes greatly amplified in the subsurface. Hidden cave life has adapted to unique ecological niches over thousands of years, isolated environments where even small changes overhead can wipe out species. A cave flatworm can serve the same purpose for an ecosystem as a canary in a coal mine. Caves taught me to pay attention.

At annual gatherings like the TAG Fall Cave-In and the SERA Cave Carnival, I join cavers in remote valleys, swapping around campfires news of discoveries and environmental threats, as well as tall tales and folk music. One lyric from my early caving days still echoes through the hills at such meetings, the refrain of the late John Prine’s environmental anthem “Paradise”: “I’m sorry, my son, but you’re too late in asking. Mr. Peabody’s coal train has hauled it away.”

Of course, local fights for wilderness are not confined to cave country. They brew quietly throughout the South, from a threatened maritime forest in South Carolina to a proposed turnpike in a Florida wildlife corridor. Beyond environmental damage, the potential loss of these sites most directly affects the few people who live there. Amid the Covid-19 economic downturn, rural residents can find themselves torn between their love of the land and a desperate need for jobs.

The need may be no more desperate than in Jefferson County, which in 2011 made headlines with a $4 billion municipal bankruptcy. In 2020, analysts saw its continued economic collapse as a dire warning of what could happen elsewhere in a pandemic-related recession.

Yet rural residents in the South are coming together on the side of preservation. At a meeting of the Coffee County Commission on Nov. 10, opponents spoke against zoning changes for three hours, prompting commission members to withdraw the quarry proposal — temporarily, they said, to make revisions. A new plan that would essentially open even more county land to quarries is scheduled for a vote on March 9.

In 2017, I interviewed Mr. Prine for a literary website, asking whether he had traveled lately to Kentucky’s Green River, where the town of Paradise once lay. “The few times I’ve had access to a boat in the latter years and been able to go down the river,” he said, “it surprisingly looks a lot like it did when I was a kid.”

He paused to explain. “When you’re on the river, everything’s grown up, the grass and the bushes, and you can’t see all the damage that’s been done. Except when you go right by where the town sat. You know, of course, the coal chutes and everything are on the river where they loaded the barges up.”

Mr. Prine taught me to appreciate nature as fleeting. So did exploring caves. Whenever I pause underground to consider my way forward, I spot nature inches away. If the fight for Butler Mountain is lost, chances are that the surrounding land will still look much the same to casual travelers. But it will look forever changed to residents, cavers and slimy salamanders.

Vulcan Materials will have hauled it away.

How have environmental issues affected your community?