Readers are hopeful that the law will not only provide temporary economic relief but also promote long-term equity, and urge Republicans to join the effort. 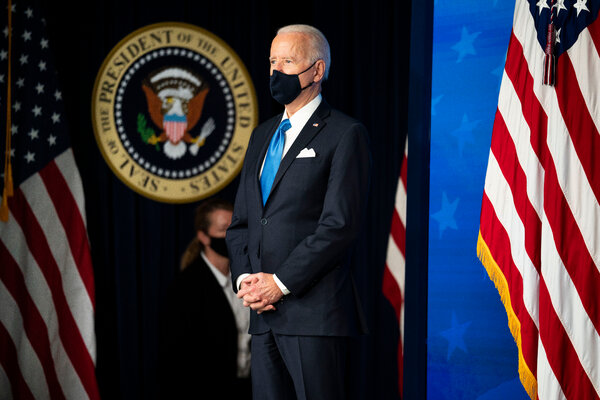 Re “Congress Passes Biden’s $1.9 Trillion Aid Bill” and “Champion of the Middle Class Comes to the Aid of the Poor” (front page, March 11):

Sometimes circumstances bring us the most transformational presidents. There was little hint in the backgrounds of Franklin Delano Roosevelt or Lyndon Baines Johnson that they would help lift millions out of poverty. There wasn’t any with President Biden either.

The brutal toll that the past year has taken and the income inequality that has accelerated left the Democrats with an opportunity they needed to seize. Mr. Biden is the president for this time.

The Republicans, who unanimously rejected the aid package, appear to be in a race to irrelevance. Congressional Republicans might be better served by breaking free from the past and working to legislate instead of castigate.

Not only will the legislation just passed by the Democrats represent bold relief for many Americans, but it also represents, hopefully, the first step in a grand reinvestment in American life. For far too long, we have allowed the wealth of the nation to spiral upward into too few hands.

Perhaps some Republicans will begin to join the march toward a better today and tomorrow. No doubt, there are still some with useful ideas to add. It is time for Republicans to get back in the game with an eye toward winning for all Americans.

It is thrilling news that the stimulus bill has passed to battle the pandemic and poverty, with extended unemployment, food and rent relief, and tax credit expansions that could cut poverty in America by one-third.

Thank you, Mr. President and Congress, for protecting us from the pandemic and its economic fallout, while putting America on the road to equity!