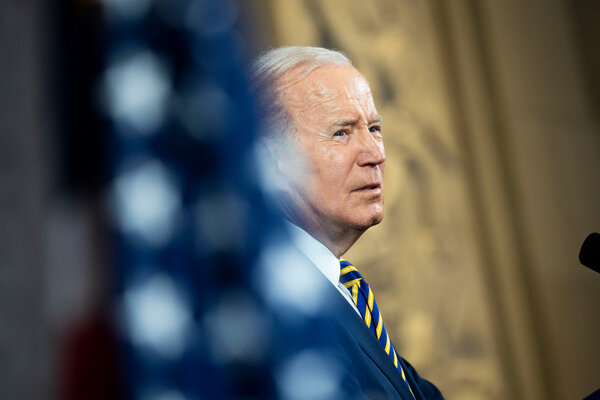 I’ve covered four presidents since joining The Times in 2003. Year after year (except during the Trump years) I go into the White House. The rooms are pretty much the same. The immaculate formality is the same. But the culture of each administration is quite different. The culture is set by the president.

The phrase that comes to mind in describing the culture of the Biden White House is the assumption of power. Biden and his team do not see America as some beleaguered, declining superpower. They proceed on the premise that America is in as strong a position as ever to lead the world.

Biden’s cheerful confidence is an unappreciated national asset. As American power has come to be underestimated, especially since the election of Donald Trump, a man like Biden, who has been underestimated pretty much his whole life, is in a decent position to help Americans regain confidence in their country and its government.

Last year was awash in examples of this, as Biden did nothing less than help tame the world. He passed major legislation and led the Democrats to a surprisingly successful midterm election. He organized a global coalition to support Ukraine and set Vladimir Putin back on his heels. He took a series of measures to push back against Chinese hegemony, including sweeping semiconductor export controls.

This year he will face off against the same extremists. But they are weak in crucial ways. The fractured House Republicans are controlled by their wackiest wing. Putin continues to fail in Ukraine. Xi Jinping is beset by numerous crises, from Covid to demographic decline to the economy. Biden will have to manage these wounded adversaries to make sure they don’t lash out in extremis, doing something crazy to disrupt the world.

Republican craziness could manifest itself during the looming debt ceiling crisis. A wing of Republican fiscal terrorists could make such outrageous demands that the United States is unable to fulfill its financial obligations. Biden will probably have to work with Mitch McConnell and Chuck Schumer in the Senate to come up with a plausible debt ceiling compromise. Then he’ll have to cajole or pressure a group of vulnerable and reasonable House Republicans, some in districts Biden won, to break with their party, so that the compromise can get through the lower chamber.

Putin’s craziness could manifest as a doubling down on his Ukraine adventure or even the still existing threat of nuclear weapons. The core problem for Putin is that he has no easy way out, short of withdrawal and humiliation. He could try to win the war the traditional Russian way, by throwing masses of men into the quagmire. But suppose that doesn’t work out. All he’s got left is nukes. What does Putin do then?

Xi’s craziness could manifest as ever more aggressive moves in his region and beyond, including an invasion of Taiwan. Xi has helped raise millions to middle-class status, but suppose he can’t fulfill the expectations that middle-class status generates? His authoritarian nationalism has provoked the United States to erect trade barriers and impose export controls. Growing levels of American corporate investment can no longer be assumed. How does Xi respond to the hostile environment he has created?

The United States, democracy and liberalism are now winning, and the problems of authoritarianism, domestic and international, are exposed. But Biden is going to have to thread a series of needles to be sure the wounded extremists don’t take the world down with them.

The stress of this situation doesn’t seem to be weighing heavily on Biden and his team.

I’d describe this administration’s methodology with this phrase: steady and incremental pressure. When Putin first invaded Ukraine, the U.S. was wary of acknowledging the ways in which it was militarily aiding the defenders. But it has steadily ramped up the pressure, moving from offering Ukraine Stinger antiaircraft missiles to providing Patriot air defense systems and armored fighting vehicles. Now, my colleagues report, the Biden administration is thinking of helping the Ukrainians go after Russian sanctuaries in Crimea.

The Biden administration does not seem to be trying to decouple the American and Chinese economies. A healthy Chinese economy is in America’s interest for the sake of global stability. But the Biden administration has continued to ramp up the pressure on China’s nationalist tendencies, trying to stall Chinese development in, say, computing, biotech and biomanufacturing.

Biden’s pressure on the Republicans follows the same incremental and steady pattern. Many of the infrastructure projects that were funded by recent legislation are now getting underway. You can look forward to seeing the president at event after event, like the one he did with Mitch McConnell in Covington, Ky., to tout new funding for the Brent Spence Bridge.

The goal is to show the American people that government does work and that Biden himself deserves re-election. Biden’s going to go after G.O.P. extremism, but he hopes to make his own competence the center of his election argument.

Bill Clinton’s administration was forever associated with the word “triangulation” — moving beyond left and right. The word to associate with Biden should be “calibration” — this much pressure but not too much. It’s a tricky business. We’ll see if it works out.