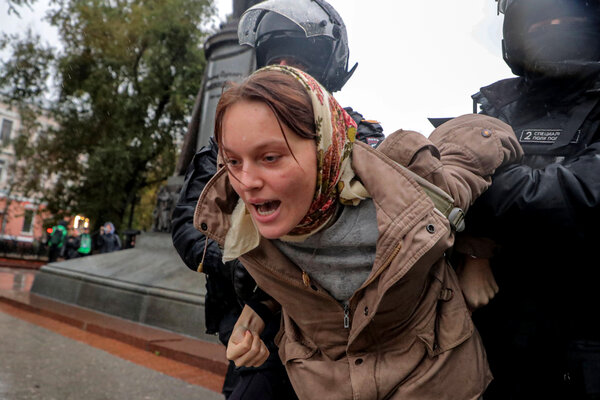 Wouldn’t it be fitting if the regimes in Moscow and Tehran — the first defined by a cult of its leader’s machismo, the second by its systemic misogyny — were brought down by protests inspired and led by women?

The possibility is no longer remote. The protests that have unfolded throughout Iran since the cruel death of 22-year-old Mahsa Amini — accused of violating Iran’s hijab rule, arrested by the morality police and almost certainly beaten into a coma in detention — are the most serious since the Green Revolution of 2009 after Mahmoud Ahmadinejad’s fraudulent re-election.

But this time may be different.

Then, the supreme leader, Ayatollah Ali Khamenei, was vigorous and in full control of the system. Now, there are reports that he is gravely ill. Then, Iran exported roughly 2.3 million barrels of oil a day. Now, thanks in part to sanctions imposed by the Trump administration, it exports about 800,000. Then, the protests were mainly about politics, which were centered in Tehran. Now, they are about human rights, and there is a potent ethnic component: In Iran’s Kurdish region, from which Amini hailed, the city of Oshnavieh was briefly seized by protesters over the weekend. Then, the regime’s militia and security services seemed to easily overpower the protests. Now, Iran’s chief justice, Gholam Hossein Mohseni-Ejei, has been caught on video complaining that his officers are overwhelmed and “have not slept.”

But the biggest factor is the female factor.

“In 1979, when women were demonstrating against the threat of hijab, they were alone,” the writer Roya Hakakian, who lived through the Iranian revolution as a teenager, told me on Monday. “Now the tide has dramatically changed. Men recognize women’s leadership and are at their side. It’s clear that these demonstrators have forged a collective identity that is contrary to the identity of the regime. They counter the regime’s misogyny with unprecedented egalitarianism.”

Running a dictatorship is a delicate art. Those who try to govern with too light a touch — leaving ordinary people more or less alone except where politics are concerned — run the risk of letting a taste for freedom gain too much ground.

But those who try to interpose the regime in the most personal aspects of people’s lives, including the choice of what to wear, run different kinds of risks. They require the state to monitor the behavior of everyone, not just a few. They vastly enlarge the circle of people with personal reasons to hate the system. And they furnish them with the simplest instruments of revolution. If every woman in Iran must don hijab, every woman has the means of starting a revolution.

For years, Vladimir Putin knew better than to fall into this trap: His weapon was the scalpel, not the sledgehammer, and his bargain with the Russian people was that they would be left alone if they left politics alone.

As for the would-be troublemakers, in 2007 the Russian human-rights lawyer Karinna Moskalenko explained Putin’s method to me. “It isn’t necessary to put all the businessmen in jail,” she said. “It is necessary to jail the richest, the most independent, the most well connected. It isn’t necessary to kill all the journalists. Just kill the most outstanding, the bravest, and the others will get the message.” A vague scent of fear, not an omnipresent system of compulsion, is what gave Putin’s regime its staying power.

Overnight, this has changed. The “partial mobilization” Putin ordered to fill his army’s decimated ranks is the essence of compulsion. To judge from images coming out of Russia, military-age men are fleeing for the border, and women are taking to the streets. On Sunday, an item in Sky News reported “more women than men at the protest in Moscow — one by one, they were thrown into police vans.”

Putin has reasons to worry. The Committee of Soldiers’ Mothers of Russia, run at the time by Maria Kirbasova, helped put an end to Russia’s first disastrous war in Chechnya in the early 1990s. Before that, Russian mothers were instrumental in calling attention to the evils of dedovshchina — the routine and brutal abuse of young military conscripts — which also helped undermine the Soviet military effort in Afghanistan.

Now, for every one of the 300,000 young men Putin seeks to turn into cannon fodder in his disastrous and illegal war, there are uncountable mothers, wives, sisters, daughters and girlfriends who have, in effect, been mobilized, too. They have a better chance of taking Moscow than the Russian Army will ever have of taking Kharkiv or Kyiv.

It’s good that the Biden administration, which has done so well in standing up to Putin, has now thrown its weight behind Iran’s protests, including by trying to keep Iranians connected to the internet via Elon Musk’s Starlink boxes. It can do even better by withdrawing from the nuclear talks, on the principle that a regime that will not give relief to women deserves no relief from sanctions.

The West has had a women’s movement and a Women’s March. Now is the time for a Women’s Revolution in Iran and a Women’s Peace in Russia. The opportunities are ripe.

Opinion | Republicans Did Not Read the Room

Opinion | Extremism Is on the Rise … Again