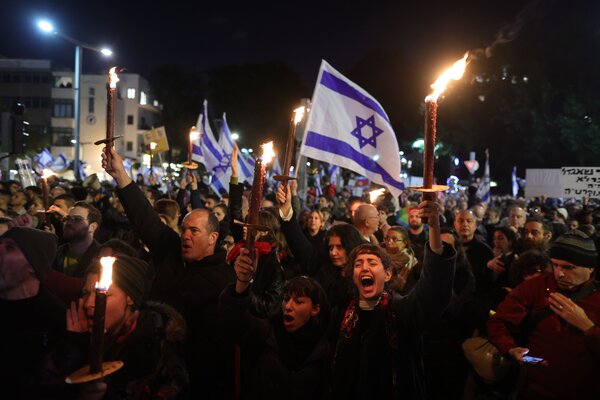 If I could get a memo onto President Biden’s desk about the new Israeli government, I know exactly how it would start:

Dear Mr. President, I don’t know if you are interested in Jewish history, but Jewish history is certainly interested in you today. Israel is on the verge of a historic transformation — from a full-fledged democracy to something less, and from a stabilizing force in the region to a destabilizing one. You may be the only one able to stop Prime Minister Benjamin Netanyahu and his extremist coalition from turning Israel into an illiberal bastion of zealotry.

I’d also tell Biden that I fear that Israel is approaching some serious internal civil strife. Civil conflicts are rarely about one policy. They tend to be about power. For years, the fierce debates in Israel about the Oslo Accords were about policy. But today, this simmering clash is about power — who can tell whom how to live in a highly diverse society.

The short story: An ultranationalist, ultra-Orthodox government, formed after the Netanyahu camp won election by the tiniest sliver of votes (roughly 30,000 out of some 4.7 million), is driving a power grab that the other half of voters view not only as corrupt but also as threatening their own civil rights. That’s why a 5,000-person anti-government demonstration grew to 80,000 over the weekend.

The Israel Joe Biden knew is vanishing and a new Israel is emerging. Many ministers in this government are hostile to American values, and nearly all are hostile to the Democratic Party. Netanyahu and his minister of strategic affairs, Ron Dermer, had plotted with Republicans to engineer Netanyahu’s 2015 speech in Congress against Biden’s and President Barack Obama’s wishes and policies. They would like to see a Republican in the White House and prefer the support of evangelical Christians over liberal Jews and that of M.B.S. over A.O.C.

Have no doubts about this. The president should not be misled by their “our old friend Joe” pablum.

The current crisis in Israel may be presented to Biden as an internal constitutional matter that he should stay out of. To the contrary. Biden should wade right in (just as Netanyahu did) because the outcome has direct implications for U.S. national security interests. I have no illusions that Biden can reverse the most extreme trends emerging in Israel today, but he can nudge things onto a healthier path, and maybe prevent the worst, with some tough love in a way that no other outsider can.

The most pressing crisis is this: Israel’s courts, led by its Supreme Court, have largely been ferocious protectors of human rights, and particularly the rights of minorities. These minorities include Arab citizens, L.G.B.T.Q. citizens and even reform and conservative Jews who want the same freedom and rights of religious practice as Orthodox and ultra-Orthodox Jews enjoy. In addition, because Israel’s Supreme Court reviews the actions of all executive branches, including the military, it has often protected the rights of Palestinians, including providing protection from abuses by Israeli settlers and illegal expropriation of their private property.

But this Netanyahu government seeks to radically alter the situation in the West Bank, effectively annexing it without officially declaring to do so. And the plan has just one big obstacle: Israel’s Supreme Court and legal institutions.

As The Times of Israel summarized, the judicial overhaul that Netanyahu intends to ram through the Knesset would “grant the government total control over the appointment of judges, including to the high court,” replacing a much less partisan and professional judicial appointment process. The overhaul would also severely limit “the high court’s ability to strike down legislation” — especially legislation that might curb the rights of Israel’s minorities — “and enable the Knesset,” now controlled by Netanyahu, “to re-legislate” laws that the court strikes down.

The overhaul would also diminish the independence of the legal watchdogs at each government ministry: Instead of reporting to the attorney general, they would become appointees of each minister.

In short, Israel’s executive branch would assume control of its judiciary. This is right out of the Turkey-Hungary majoritarian playbook, especially when you consider one more thing: This is all being done at a time when Netanyahu himself is being tried on charges of bribery, fraud and breach of trust in three cases brought by his own attorney general.

Early this month, a former Netanyahu right-wing defense minister and former chief of staff of the Israeli Army, Moshe Ya’alon, tweeted that Netanyahu’s judicial “reforms” revealed “the true intentions of a criminal defendant” who is “ready to burn down the country and its values … in order to escape the dock. … Who would have believed that less than 80 years after the Holocaust that befell our people, a criminal, messianic, fascist and corrupt government would be established in Israel, whose goal is to rescue an accused criminal.”

Netanyahu, of course, says this is the furthest thing from his mind — God forbid.

Israel, because it does not have a formal constitution, is governed by a very complex set of legal checks and balances that have evolved over decades. Legal experts tell me that there is an argument for some changes to the judiciary. But to do so in Netanyahu’s way — not by a nonpartisan national convention, but with the Supreme Court being stripped of powers by the most radical government in Israeli history and knowing Netanyahu’s criminal case could end up before the high court — stinks to high heaven.

To put it in American terms, it would be as if Richard Nixon tried to expand the U.S. Supreme Court with pro-Nixon justices during the Watergate criminal investigation.

The current president of Israel’s Supreme Court, Esther Hayut, declared last week that Netanyahu’s proposed overhaul “will shatter the judicial system and is in fact an unrestrained attack.” In addition, groups of retired air force pilots, high-tech executives, lawyers and retired judges from the left and the right, including some retired Supreme Court justices, have all signed letters saying basically the same thing.

The U.S. has given Israel extraordinary amounts of economic assistance, sensitive intelligence, our most advanced weapons and virtually automatic backing against biased resolutions in the U.N. I support that. We also have long opposed any legal action by international institutions, based on the argument that Israel has an independent judicial system that — not all the time, but plenty of times — credibly enforced accepted norms of international law on Israel’s government and army, even when it meant protecting the rights of Palestinians.

Before Netanyahu succeeds in putting Israel’s Supreme Court under his thumb, Biden needs to tell him in no uncertain terms:

Here is my guess of how Netanyahu would respond:

Joe, Joey, my old friend, don’t press me on this stuff now. I am the only one restraining these crazies. You and I, Joe, we can make history together. Let’s join our forces not to simply deter Iran’s nuclear capabilities, but to help — in any way possible — the Iranian protesters trying to topple the clerical regime in Tehran. And let’s, you and me, forge a peace agreement between Israel and Saudi Arabia. M.B.S. is ready if I can persuade you to give Saudi Arabia security guarantees and advanced weapons. Let’s do that and then I’ll dump these crazies.

I applaud both foreign policy goals, but I would not pay for them with a U.S. blind eye to Netanyahu’s judicial putsch. If we do that, we’ll sow the wind and reap the whirlwind.

Israel and the U.S. are friends. But today, one party in this friendship — Israel — is changing its fundamental character. President Biden, in the most caring but clear way possible, needs to declare that these changes violate America’s interests and values and that we are not going to be Netanyahu’s useful idiots and just sit in silence.