LOS ANGELES — Late last March, after the appearance of the coronavirus prompted a first shutdown here, I put up a handmade lawn sign that read: “We Can Beat This!” The bold black lettering on a blue-wash background was a spirited, almost cheeky response to a crisis that was gathering but that I hoped would peak and fade quickly, like a big earthquake.

The sign held up remarkably well, something I saw as a good omen even as coronavirus infections steadily increased. Eventually, though, it became clear that this crisis would not pass swiftly at all.

By fall the sign was still intact, but it had stopped registering for me; it seemed a remnant of a holiday long past, like Christmas lights left up well after Dec. 25. And then last week it finally came apart, the bright blue paper peeling off its cardboard mount. The message had become its shadow.

The sobering reality is that Los Angeles is one of the country’s biggest Covid disaster areas. The Los Angeles Times reports that Los Angeles County has seen over 1.1 million confirmed cases, including 464,000 in the city of Los Angeles, and our vaccine rollout has been described as “chaotic.” 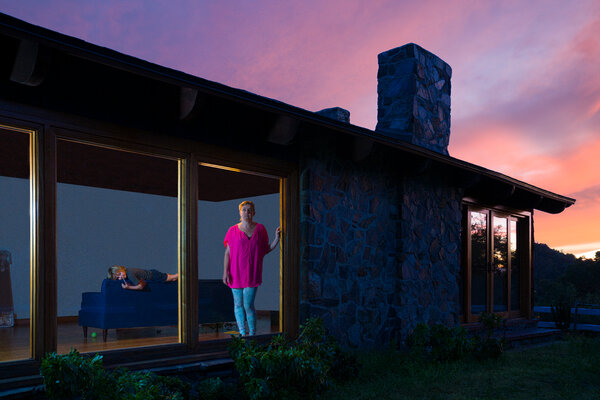 Early on we seemed to be setting the example: California was the first state to shut down. Gavin Newsom, our heroically inclined governor straight out of central casting, gave us updates almost every day. But what was supposed to be a Hollywood ending never materialized.

California and Los Angeles County in particular have been caught up in a tortured cycle of shutdowns and partial reopenings as infection and death rates ebb, and then surge. (Now we are back to outdoor dining, with caveats: Only people who live together can dine together, and no TV at the bar.)

I think Angelenos suffer from a permanent sense of exceptionalism, despite all the disasters we’ve had — or perhaps, because we’ve survived them. But the awful truth is that this city is not exceptional, and this pandemic won’t have anything like a happy ending. The initial restraint that kept rates low relaxed and this begat surges of infections.

Over the past year, the deep racial and economic inequality here, which is somewhat invisible to outsiders, was suddenly exposed. Our overpriced housing means that it’s not uncommon for six or more people, often Black and Latino, to live in places meant for two or three. This kind of crowding ais a driving force in who gets the virus, and where.

Covid hasn’t just tarnished Los Angeles’s reputation as an outlier, it’s stifled the spontaneity that is a big part of who we are. I was already working at home when the pandemic hit, but in a city where routines are daily inventions, home was always just a staging ground for all the other things I decided I needed to do — meet somebody in Crenshaw, have dinner with my sister near Koreatown or get pizza at my favorite neighborhood restaurant that isn’t actually in my neighborhood.

This may sound like a trivial complaint, but almost nothing is fun anymore. Last March, the shutdown was kind of thrilling — our city was suddenly the set of some Hollywood disaster. Face masks became our costumes, the Covid edicts from public officials our screenplay. The improvisation required to stay apart and out of public spaces and live our lives as Angelenos often felt like performance.

That thrill of performance is long gone. We have settled into a pause that feels endless and has stripped away the magic of so many ordinary things. A good friend of mine, a screenwriter, says Los Angeles has failed itself. The great Covid crisis has not inspired people to rally around, to say in one voice, “We can beat this!” In other words, the story has been a letdown. My friend is now so disillusioned that he plans to leave.

I don’t see things that way. I’ve always thought our civic laidback-ness is our strength; we can’t be broken because there’s nothing obvious to break. And yet my friend is right. The critical mass of small connections that sustain us are being decimated by the pandemic. When all you really need to know about a person is whether they’re infected, all the other reasons to know them vanish, and there is no good mystery among strangers — a subtle but persistent curiosity about one another that makes for a unique sense of togetherness — left.

I miss seeing the people right next to me, like my neighbor down the block. Christina is in her 40s and is originally from Rhode Island but has a quintessential Los Angeles life — works in tech, writes in her spare time and is one of the most optimistic people I know. She developed Covid in October.

Recently she told me (from 12 feet away, standing in the driveway) that she had never felt fatigue like that in her life, couldn’t even hold a cellphone. She’s much better but still doesn’t feel 100 percent. “I don’t know that I ever will again,” she said, calmly but with resignation. Like this city, she is still herself, but now there is a shadow.

Erin Aubry Kaplan is a contributing opinion writer who has written regularly about race, identity and life in Los Angeles since 1992.