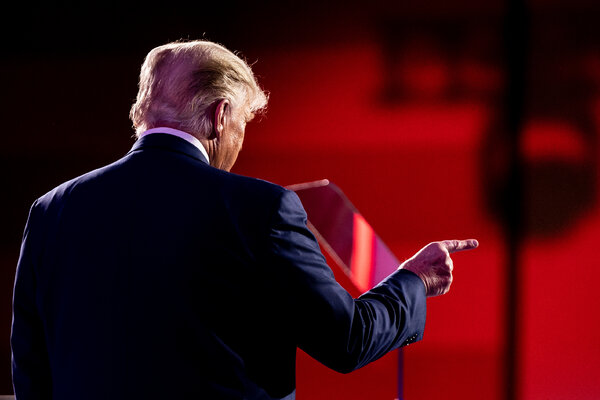 The Facebook Oversight Board’s decision upholding the ban on former President Donald Trump has laid bare a fundamental problem with the social media network: It has utterly failed at reining in hate, extremism and disinformation.

Despite having policies prohibiting this type of content on the platform, for years Facebook has haphazardly and inconsistently enforced its community standards. As a result, the platform remains a repository for some of the most hateful, racist and anti-Semitic content imaginable.

Its algorithms routinely amplify and recommend this content, and the public has no transparent process to understand the magnitude of Facebook’s role in spreading dangerous conspiracies and racist, hateful violence.

It took a series of posts by the president of the United States supporting the mob of violent rioters who invaded our Capitol to bring this longstanding problem into sharp relief. The months of our former president spreading lies and dangerous disinformation undermining the integrity of our electoral process were somehow not enough for Facebook.

What is clear is that no amount of independent “oversight” is going to fix Facebook’s problems. It’s time for Congress to step in with meaningful measures, including reforming Section 230 of the Communications Decency Act, so Big Tech is finally held accountable.

Jonathan A. Greenblatt
New York
The writer is chief executive and national director of the Anti-Defamation League.

What Are the Lessons of Afghanistan?

“Dismantling 20 Years of War in Southern Afghanistan” (Kandahar Dispatch, May 4) makes me ponder for the umpteenth time some of the triumphs and tragedies of America’s long wars, both those wars declared and undeclared.

We as a country come away from the Afghan war with the feeling that there are some big lessons to be learned from our 20 years of travail in that bloody money pit. Trouble is, we have no idea what those lessons are.

If the solar industry is going to continue to thrive, it needs transparency and sustainability throughout its supply chain. The industry’s success is crucial to tackling climate change and growing the U.S. economy. Recent revelations of human rights abuses in China’s Xinjiang region — the epicenter of polysilicon production for solar panels — is a wake-up call to the entire industry. Forced labor is abhorrent and has no place in our world, much less the solar industry.

Additionally, solar component factories in Xinjiang use predominantly dirty coal power for their operations. This is needless pollution at a time when governments and businesses are looking to decarbonize their supply chains. Fortunately, there are numerous ultra-low-carbon solar panels from sustainable supply chains.

As the debate about a national clean energy plan advances, policymakers and corporate buyers can send a strong market signal that the next tranche of solar manufacturing should be devoid of these untenable practices by buying better solar. After all, shouldn’t solar be truly sustainable?

Michael Parr
Washington
The writer is the executive director of the Ultra Low-Carbon Solar Alliance, an alliance of solar manufacturers.