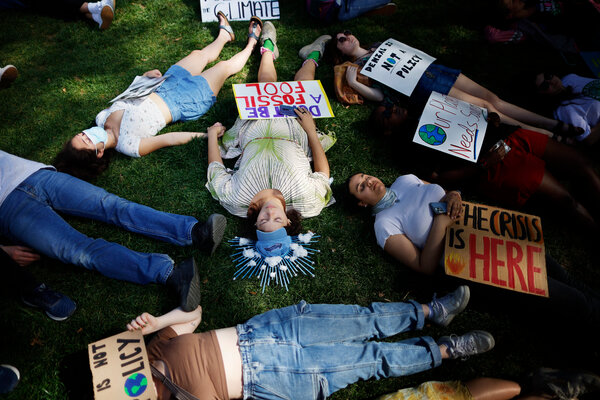 In a column published in June 2021, I declared the coming year would be a “hinge in history” for American participation in the global effort to address the climate crisis. Having won the White House and control of the House and the Senate, Democrats had cracked open a rare window of political opportunity — their first chance since 2010 to pass major federal legislation to reduce our carbon emissions.

But the window wasn’t very big, and it wouldn’t stay open long. President Biden had proposed setting a target of 2030 for the United States to cut carbon emissions to half of 2005 levels. He’d outlined hundreds of billions of dollars of investments in clean energy, public transit, electric vehicle infrastructure, severe weather preparedness and climate-related research and development. Now, in the face of united Republican opposition, and with midterm politicking rapidly approaching, could Democrats seize what I called “the country’s last best political opportunity” to address climate change and pass Biden’s plan?

Well, a year has passed, and the answer is in: Nope.

When Senator Joe Manchin pulled his support last week for even a significantly scaled-down version of Biden’s climate plan, America’s great window of opportunity all but slammed shut. Manchin’s decision was no surprise — he has been stringing his party along for more than a year — but for me it still packed a wallop.

Was I thrown into a spiral of despair about the incapacity of our political system to take on urgent issues? Was I left feeling hopeless about the world’s efforts to avoid climate scientists’ worst-case scenarios? Did I wonder more than once what even was the point of Democrats running the show if they could not secure this plan? Yeah, maybe just a little.

It is difficult to overstate the case for a huge federal effort on climate change. It’s popular — most Americans think Congress should address the causes and effects of climate change. And because there are new disasters brought about by a warming planet seemingly every week now, the issue will only grow more urgent. (About 100 million Americans are sweating through severe heat this week.)

Biden’s plan also made economic sense: Regardless of whether America participates, a global transition to renewable fuels is already underway. China leads the United States (and the rest of the world) in growth in renewable power generation capacity and in solar panel manufacturing; because the Chinese government is investing heavily in renewables while we are not, we risk falling further behind in industries that will dominate the future.

It has also rarely been clearer that our dependence on fossil fuels is doing us no national security favors. Biden was in Saudi Arabia last week when he conceded defeat on the climate bill. He was there to ask one brutal petromonarch for more oil because another brutal petromonarch is using his fossil fuel profits to finance an invasion of a sovereign neighbor. But despite an embarrassing fist bump with the Saudi crown prince, whose country Biden once aimed to sideline as a global “pariah,” the president hasn’t yet secured any guarantees for more oil. That may change at an upcoming meeting of the OPEC+ oil cartel — but shouldn’t we be striving for a future in which we wouldn’t have to bend to such characters because they happen to sit on a lot of dead plants and animals?

It’s precisely the strength of the case for federal climate action that has left me feeling so down. Democrats seem headed toward losing their congressional majorities in the midterms, and Biden’s approval ratings are abysmal. It is difficult to imagine the party will get another shot at taking major climate action anytime soon. What will become of climate change as a political issue if Democrats are out in the political wilderness? Are we doomed to another decade of inaction?

Climate experts told me not to abandon all hope. Alex Trembath, the deputy director of the Breakthrough Institute, an environmental research group, took issue last year with my characterization of Biden’s plan as a do-or-die moment for the American climate movement.

“There isn’t a 12-year deadline or a one-year deadline,” Trembath told me this week. He argued that advocacy that leans on such deadlines is bound to provoke nihilism, and that a better way to talk about climate change is as a long-term issue that we will have to keep dealing with for as long as we live.