MEXICO CITY — President Andrés Manuel López Obrador is in the middle of a political storm. His party nominated Félix Salgado Macedonio, who has been accused by five women of rape and sexual harassment, as a candidate for governor of Guerrero State.

Among the allegations: A woman said that as a 17-year-old in 1998 she was raped by Mr. Salgado in his home. Another woman said she was drugged, beaten and raped by him in 2016. A third woman accused him of sexual harassment in 2007.

Protests were quick to follow. A majority of Mexicans believe that Mr. López Obrador should withdraw his support for Mr. Salgado’s candidacy. Even within the president’s own Morena party, more than 100 senators and deputies demanded the withdrawal of the nomination. People who have been staunch party loyalists have threatened to resign.

Until now, the Morena party, Mexico’s largest, had been unified in its support for its main leader and founder, Mr. López Obrador. Demonstrating unwavering loyalty to the president was a path to party positions and voter support. Now, female Morena members are openly questioning Mr. López Obrador’s leadership. The result may be the fracturing of the party, perhaps the most important political development in Mexico in a decade.

Still, Mr. López Obrador seems to have not taken notice of the storm brewing. He is standing by Mr. Salgado. 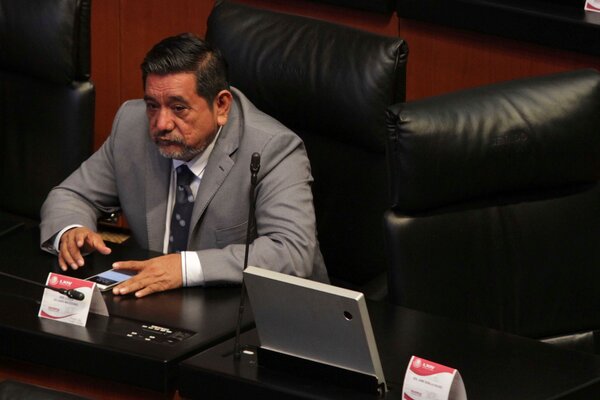 Moreover, even though his cabinet has more women in it than any one before it, Mr. López Obrador believes that feminism is the wrong battle to wage. He thinks the root of Mexico’s poverty and gender inequality is the result of a government that for decades has been corruptly committed to protecting a group of businessmen who amassed fortunes thanks to their proximity to power, and not the country’s ingrained misogyny.

By his logic the injustices women suffer will be resolved when corruption is eradicated. Championing feminism, he reasons, is the conservative party’s attempt to create a distraction while it brazenly loots Mexico.

I am a Mexican woman, and I agree with Mr. López Obrador on many points. Like him, I believe that predatory political and economic elites have enriched themselves at the expense of the rest of us.

But unlike Mr. López Obrador, I know that even if wealth is redistributed, the abuse and inequalities suffered by women will remain. Women should not tolerate this lie the president continues to espouse.

Nor should we tolerate Mr. Salgado’s candidacy. Over 40 percent of Mexican women have been victims of some form of sexual assault. The sexual harassment we endure will not be resolved through trickle-down economics, but through punishing abusers.

Poverty has also increased among women while it has decreased among men: 32 million women are poor — 10 percent more than the number of men. Women in white-collar jobs continue to earn less than men.

This is the result of a history that has been forged by greedy men, who have exclusively run the show. The results have been disastrous: Their decisions have led us to become a country where inequality is endemic and poverty has the face of a woman.

Our economy, shaped by men, is replete with privileges for them. It is built on the unpaid work of millions of women who take care of children and the elderly so that men can study or engage in paid work.

When Mr. López Obrador was elected president in 2018, he pledged to wage war on social injustice. Many women, including myself, thought that this meant that he would fight for us, because if the poor should come first, as he declared in his campaign speeches, then women should be at the forefront of his agenda.

Since his election, he has failed to hear our message, showing his insensitivity to the feminist cause and to the most basic demands of women.

We must change our tactics and stop wasting our energy trying to convince Mr. López Obrador that our fight against sexual violence and for gender equality is legitimate and essential. Many leftist women and politicians from his Morena party are also wasting valuable time on this uphill battle.

We must turn our focus to organizing and championing the fight against all injustices — not just those Mr. López Obrador deems relevant. Insisting on the withdrawal of Mr. Salgado’s candidacy is not a question of conservatism or liberalism, of right or left. It is a matter of basic human decency. And if the president does not understand this, it is time to find new leaders.

We must channel our anger and frustration into a political organization that includes all parties and encourages them to include a solid and reality-based gender agenda. Denouncing men who have committed sexual abuse is only part of the objective. The ultimate goal must be to correct the failures in the systems that make our society, and the state, dependent on the unfair labor burdens shouldered by women.

It is not enough to have female leadership in order to win the battle for women. We must fight for the social, political and economic justice that we have been denied and we must share it with others.

Only then will we be able to expand opportunities for all Mexicans.

Viridiana Ríos (@Viri_Rios) is a political analyst. This essay was translated by Erin Goodman from the Spanish. A version of it appeared on March 1 on the Spanish-language site of The New York Times.