Ms. Jaouad is the author of the memoir “Between Two Kingdoms,” where she writes about her friendship with Quintin Jones. In 2012 and 2013, she chronicled her experience with cancer in The Times.

My world had narrowed to a tiny, white-walled, fluorescent-lit hospital room in New York in 2012. I was 23 and enduring a seemingly hopeless struggle with leukemia, and I had spent much of the previous year in medical isolation, at times too sick to speak. I’d never felt so alone.

That’s when I got my first letter from a man in Texas named Quintin Phillippe Jones, Quin for short. He’d read an essay I’d written about what I described as my “incanceration” and he wanted me to know that my words had touched “a death-row convict heart.” I noticed the handwriting — wrought and elegant. I felt a kind of vertigo, knowing it was from a man who had committed a heinous crime.

In 1999, when Quin was 20 years old and on heroin and cocaine, he killed his great-aunt Berthena Bryant for $30 to buy more drugs. Following a trial, he was convicted of her murder. Based on this conviction and his alleged involvement in two other killings, for which he was never charged, the prosecution argued during the penalty phase that Quin was beyond redemption and that he would continue to be a mortal threat. The jury sentenced him to die.

“I know that our situations are different, but the threat of death lurks in both of our shadows,” Quin wrote. “Try to stay as positive and as hopeful as possible, even though a lot of days that may be easier said than done.” 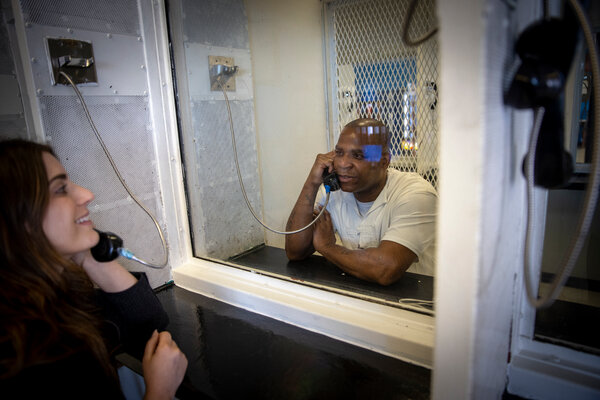 In his subsequent letters, Quin told me about his life, but mostly he asked about how my treatments were going. He was funny and earnest, frequently interjecting, “Ya dig?!”

The longer I corresponded with Quin, the more difficult it became to reconcile the person holding the pen with the convicted murderer. This is not to say that Quin denied culpability. Quite the opposite, in fact. Despite a brutal childhood mired in poverty, violence, neglect, abuse and addiction, he didn’t blame his circumstances for his actions. He expressed deep remorse, and for a long time he believed that he deserved to die for what he had done.

During his 21 years on death row, Quin has been the epitome of a prison success story. He entered at an unimaginable low, as lost as a soul can be. And through prayer, sobriety, reconciliation with his family, and longstanding correspondence with pen pals, he has found a way to lead a meaningful life, and even to enhance the lives of others. The victim’s family — who is also Quin’s family — has forgiven him.

Quin is scheduled to be executed by lethal injection on May 19. I used to tell the story of our friendship to illustrate the power of human connection. Today I tell the story of our friendship in the hope that it will save his life. I am one of tens of thousands who are asking Gov. Greg Abbott and the Texas Board of Pardons and Paroles to commute Quin’s sentence from death to life without the possibility of parole.

I’m not a lawyer, and I’m not here to make the legal argument for why this case deserves a second look. In the clemency plea, Quin’s lawyers have provided ample documentation of how our justice system failed him: that his state-appointed legal representation missed filing deadlines and failed to challenge critical problems in the state’s case; that the state’s argument hinged on discredited science and a flawed methodology; that glaring conflicts of interest have tainted the procedure for setting Quin’s execution date; that there are disparities in treatment based on race.

Instead, I want to speak to how remarkably Quin has transformed himself, and who he is now — the kind of person for whom clemency exists.

Quin has corresponded with people from across the globe. Among these pen pals are a prison psychologist in Australia, a German schoolteacher fighting cancer, and a neighbor from Fort Worth, Texas, who provided Quin a haven during his unimaginably difficult childhood.

A 9-year-old girl in England, Niamh, thinks of Quin as a big brother. “Always remember that you are somebody and never let anyone else tell you otherwise,” Quin wrote to Niamh in January.

One of the most remarkable stories came from a family in Switzerland. Sylvie, her son and her daughter all corresponded with Quin. Quin cautioned Sylvie’s teenagers against dropping out of school and doing drugs — the poor choices he himself made. When Sylvie lost her son to suicide last year, Quin became a source of solace for her.

“It isn’t hard for me to understand him personally only because I’ve tried to commit suicide before,” Quin wrote to Sylvie. “You’ve got to dig deep down inside of yourself in order to get past that feeling of wanting to die, Soul Godmother, and trust me, that isn’t an easy thing to accomplish.”

I’ve often reminded myself that Quin has never hurt me. He didn’t take away the person I loved most in the world. But he did exactly that to Mattie Long, the younger sister of Quin’s victim, Berthena Bryant, known as Bert. The sisters were best friends and practically inseparable. Ms. Long went to her sister’s house every day for breakfast and lunch, and she was Ms. Bryant’s ride to the bank and the post office.

“Because I was so close to Bert, her death hurt me a lot,” Ms. Long wrote in a letter requesting clemency for her great-nephew. “Even so, God is merciful.” She says she has seen Quin’s remorse and witnessed how much he has changed. She writes to him and visits him in prison. In her letter, Ms. Long didn’t mince words: “Quintin can’t bring her back. I can’t bring her back. I am writing this to ask you to please spare Quintin’s life.”

Recently I got a long letter from Quin, written 32 days before his execution date. For the first time in our correspondence, he said that he wasn’t doing well.

Quin wrote about how psychologically taxing it was to carry on, as the day edged closer. He mentioned that he’s under around-the-clock video suicide watch. “Now please don’t feel sad and down for me,” he wrote. “Try and feel honored to be the first person that I’ve shared this realness with! (Smile!)”

We make examples of people all the time, and sometimes rightfully so. But the greatest example that can be made of Quintin Phillippe Jones is that human beings are capable of redemption and reconciliation, deserving of mercy and grace.

Suleika Jaouad is the author of the memoir “Between Two Kingdoms,” where she writes about her friendship with Quintin Jones. In 2012 and 2013, she chronicled her experience with cancer in The Times.