The president has been much more left-wing out of the gate than many predicted. What comes next? 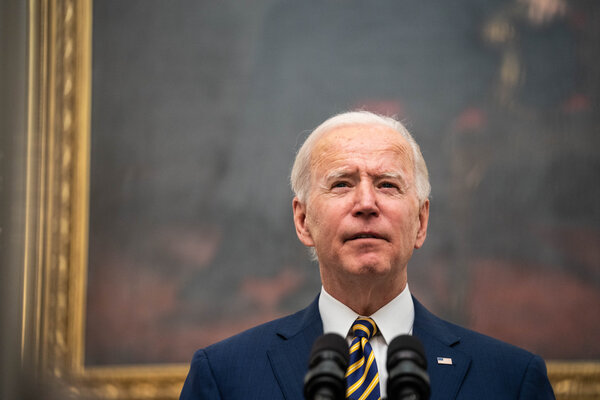 Gail Collins: Bret, the winter weather and pandemic panic are so depressing, let’s start today out with a cheerful thought. Just toss me one.

Bret Stephens: Ivanka Trump will be the next president, but it’s OK because by then most of us will have died from the South African variant of the coronavirus.

Kidding! Hey, we’ve got a president who drives my conservative self crazy in an old-fashioned way, which is to say I disagree with so much of what Joe Biden is doing. And that means he must be totally delighting you. Moratorium on fracking on federal lands? Stopping arms sales to friendly autocrats? You must feel like you’re living through real-life reruns of your favorite West Wing episodes.

Gail Collins: Bret, we have come to a great turning point. Ever since we started conversing our political differences have been drowned out by our mutual loathing of you-know-who.

Now he’s gone and we are ready for war. Friendly war.

Gail: One of the great things about our era of Trump loathing is that it allowed us to develop a personal friendship I know will endure our differences.

Bret: It will, with the assistance of fermented grapes.

Bret: I don’t begrudge a Democratic president from behaving like, well, a Democrat. He said he was going to rejoin the Paris climate accord, and so he has — though how he’ll get countries like China and India to reduce their emissions is the really important question.

Gail: Definitely a problem, but the choice was joining with allies to put pressure on China and the others, or just throwing up our hands and saying it’s hopeless. History — and future generations — will be on Biden’s side.

Bret: Could be, but China isn’t. What I don’t understand is the logic of killing the Keystone XL pipeline: It just means that Canadian oil will continue to go east or west on rails rather than south through a pipeline, with a loss of blue-collar American jobs. And I really don’t understand the administration’s hostility to fracking, which has helped the U.S. make a broad transition from coal to natural gas, and reduce both our carbon emissions as well as our dependence on foreign fossil fuels.

Gail: Ah, that pipeline. Lots of support, lots of opposition, including from many Native people who live in the construction area. My instinct is to always side with the folks who don’t want to drill for more oil.

And if our concern is good American construction jobs — remember the infrastructure! You think that can be a rallying cry. Like “Remember the Maine”? Guess not.

Bret: I’d be satisfied with, “Remember the Gateway Tunnel!” or “Remember There’s Still No Subway Link to LaGuardia!”

Of course, if Democrats really want to get serious about fighting global warming, they’d embrace safe, modern, carbon-free nuclear technology. I know a lot of our readers will say “Chernobyl!” But using a Soviet-era disaster to condemn an entire technology seems misguided to me. Every energy source involves environmental trade-offs, and from a climate perspective nuclear looks very good.

Gail: Did I ever tell you my father was in the nuclear energy business? Might not have been able to go away from home for college if that hadn’t come along.

Bret: Didn’t know that. I’m guessing the two of you didn’t see eye to eye on the benefits of enriched uranium.

Gail: The cataclysmic disaster that could occur if there’s a problem with a nuclear plant outweighs the benefits. But I have to admit I don’t really have the heart to argue a lot about this one.

Bret: What do you think of some of the other executive orders?

Gail: I’m a fan. Some of them just rescinded extremely stupid Trump dictates, like the ban on transgender troops serving in the military.