Readers react to President Biden’s deadline of Sept. 11 and reflect on the two-decade U.S. experience. 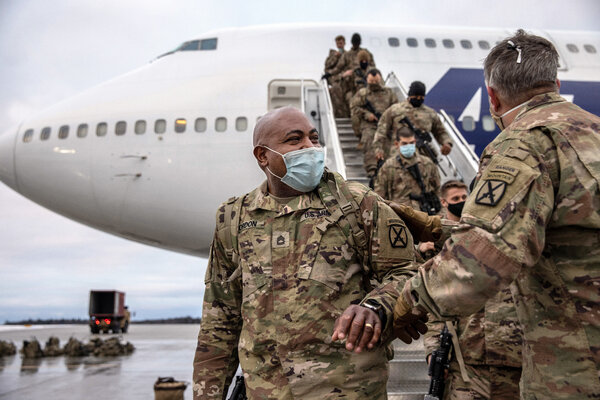 After the murder of my brother-in-law on Sept. 11, 2001, I traveled with a delegation of 9/11 family members to Afghanistan the following January to see what our country’s military response meant for the Afghan people.

We met with Afghan families who, just like us, had lost loved ones who were in the wrong place at the wrong time. We met families whose homes were destroyed by U.S. bombs, and children missing limbs from U.S. cluster bombs.

Everywhere we went, Afghans expressed hope that the two decades of war they had lived through were about to end now that the United States had arrived.

Our military response to the crime of 9/11 has led to another 20 years of war for the Afghan people. It has been heartbreaking to witness Afghanistan ripped apart by violence, fueled in part by our country’s reliance on the naïve idea that we can bring peace through war.

So it is with some guarded relief that I welcome the Biden administration’s commitment to withdrawing U.S. troops. I hope that this will finally make space for the Afghan people to rebuild the peaceful society that they deserve.

Kelly Campbell
Portland, Ore.
The writer is a co-founder of September 11th Families for Peaceful Tomorrows.

We may have Taliban fatigue, but the Taliban do not have fatigue. Our withdrawal by Sept. 11 this year amounts to our surrender to the Taliban. They just have to wait and then take over all of Afghanistan.

They will not have any incentive to bother with power-sharing, and they will proceed to curtail education and other rights that women have gained since 9/11.

As we think about the Biden administration’s decision to exit Afghanistan, we should be mindful of the Soviet experience.

At a November 1986 Politburo meeting, Mikhail Gorbachev laid out his objection to staying the course in a land that had cost thousands of Soviet Army lives.

In 1989 the vaunted Soviet military exited Afghanistan, never to look back. History suggests that when internal political dysfunction overwhelms external efforts at stabilization, getting out sooner rather than later is the best course. Mr. Gorbachev recognized this. The time is overdue for the United States to do the same.

Bennett Ramberg
Los Angeles
The writer served as a foreign affairs officer in the State Department’s Bureau of Politico-Military Affairs in the George H.W. Bush administration.

The decision by the Biden administration to withdraw our troops from Afghanistan by September amid grim reports of the prospects for peace and the likelihood of Taliban battlefield gains brings back bitter memories of the last helicopters leaving Saigon in 1975. In both cases we raised expectations, perhaps unrealistic ones, and participated in destruction and thousands of deaths.

Let’s hope that this is the last war in which, for whatever reasons, the United States ends up with its goals unrealized and the population of the invaded country left at the mercy of a repressive victor to fend for itself.

Vietnam found its way, despite very difficult years after the war. Let’s hope that the same will eventually prove true for Afghanistan.