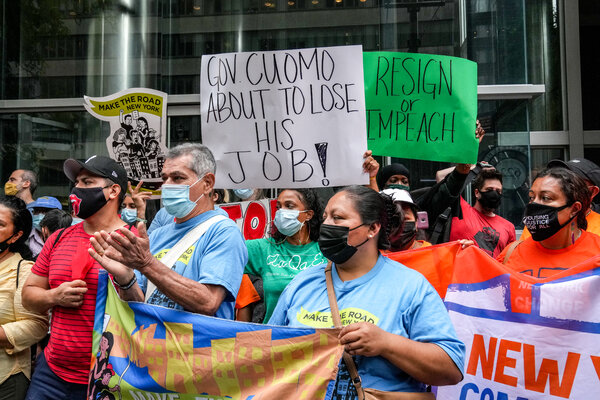 Gail Collins: Bret, we’ve been agreeing about a heck of a lot this summer. You like the Olympics and Biden’s infrastructure bill. Let me guess that we’re also on the same page when it comes to Andrew Cuomo.

Bret Stephens: Cuomo is our state’s great unifier. Everyone from The Nation to our friends at The New York Post is in agreement that he needs to go, immediately.

What I find somewhat amazing is that more New Yorkers didn’t recognize sooner what a repulsive, repellent, repugnant, revolting, retrograde, rebarbative, reprobative reptile they had in the governor’s office.

What took so long?

Gail: Well, you wouldn’t have had trouble finding stories about what a bully and jerk Cuomo can be. The grabbing part is of course the big news and I sure wish it had gotten attention sooner.

Interesting comparison to Joe Biden, who had touchy-feely issues back when he was veep. It was totally different in the sense that Biden was being friendly rather than assaultive. But women did begin to say: “Hey, enough of that hugging, squeezing stuff” and he very quickly got the message. Issued a good apology. Everybody moved on.

Do you agree on the Biden front?

Bret: Yeah. Of course there’s the Tara Reade allegation, which we’ve discussed before. I’ve always had trouble believing it, both because it seemed thinly corroborated and because no other women have come forward to allege similar behavior, as opposed to the 11 women in Cuomo’s file.

Bret: I also like seeing Democrats holding one of their own leaders to account, by impeachment and conviction if necessary, because there’s such strong evidence that he violated the law, the public trust and the values the party claims to hold dear. A stark contrast to another party I can think of.

Speaking of Democrats, I was glad to see the moderate, pro-Israel Shontel Brown come out ahead of uber-progressive Nina Turner in the Democratic primary for Ohio’s special congressional election in the 11th district. Along with Eric Adams’s primary victory in New York, I’m beginning to think the moderate side of the party is again asserting itself over its more extreme wing. What’s your view?

Gail: New York certainly did have that feel. Heard so many Democrats saying they wanted a moderate. Of course, a moderate in New York City is not exactly the same as a moderate in Ohio.