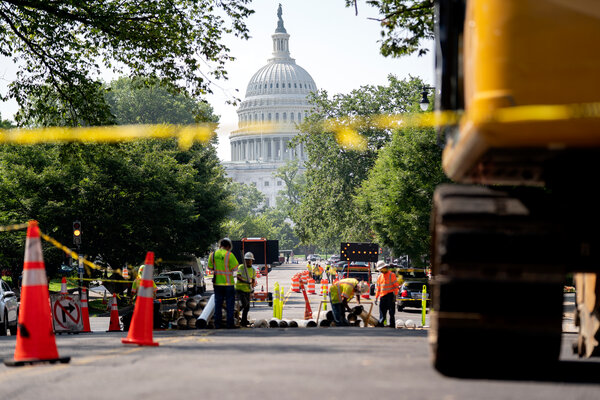 Gail Collins: Gee Bret, the Democrats lose a gubernatorial election in Virginia and the next thing you know, the nation has a brand-new $1 trillion public works program. Who says democracy isn’t efficient?

Bret Stephens: Defeat has a wonderful way of concentrating the political mind.

Gail: You’ve always been a fan of the infrastructure bill, right? Any reservations on that front now that it’s going to be signed into law?

Bret: As someone who occasionally drives the Pulaski Skyway in New Jersey — gripping the wheel with both hands while idly wondering if a bridge that was built in the Hoover administration will hold for another five minutes or collapse into the Hackensack River — I remain a committed fan of the infrastructure bill.

You wrote a terrific column about the elections last week, Bret. Can’t say I agreed with all your conclusions but it was, as always, very smart. If you were on the phone with Nancy Pelosi today, what would you advise her to do next?

Bret: First, madam speaker, please don’t hang up on me.

Second, put the social spending bill in the basement ice box and don’t take it out until Democrats have the kind of majorities that can pass it.

Third, look for a bipartisan win on immigration reform, starting with a trade on citizenship for Dreamers in exchange for more border security and a firm “Remain in Mexico” policy for migrants.

And finally, find ways to separate the Democratic Party brand from Toxic Wokeness.

Gail: I’m with President Biden that the next stop is his social spending program. Admittedly it’ll be carved down, but it has to include support for workers who temporarily need to stay home to take care of newborns or aging family members. And of course that universal preschool education.