This holiday, he says he’s thankful. Are you? 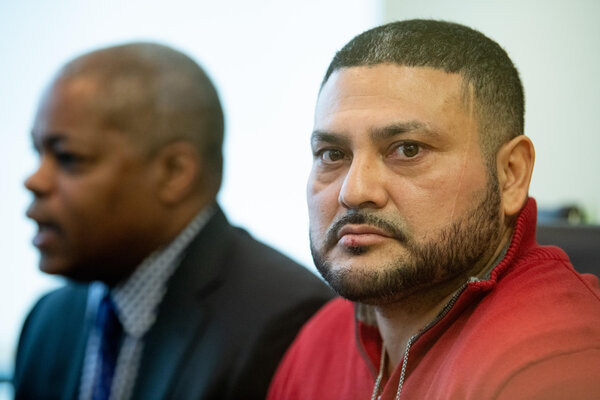 In 1995, I was a 25-year-old Brooklyn father of a one-and-a-half-year-old son. I had recently joined The Times and had become the paper’s youngest newsroom department head since a man named Lester Markel was named Sunday editor in 1923.

In 1995, Christian Pacheco was a 18-year-old Brooklyn father of a one-and-a-half-year-old son. He had recently joined the Latin Kings street gangs and become the second youngest co-defendant in a murder case.

Pacheco and some friends, including a young woman that he was seeing, were at a small, corner lounge in the Gowanus neighborhood in Brooklyn, when a bump on the dance floor quickly escalated into a brawl in which the victim was stabbed and his throat slit.

One witness testified that Pacheco was the person who slit the man’s throat. He was convicted and sentenced to 25 years to life.

Pacheco insisted that he was innocent. Although he had fought another man earlier in the altercation, he had not stabbed the victim nor slit his throat. He contends that he knew the victim, came to his rescue, and as a result was stabbed several times himself for doing so.

Still, it wasn’t until this year that Pacheco’s conviction was overturned after newly discovered information proved that he did not receive a fair trial and that the testimony of the witness who said that Pacheco did the killing was “most probably false.”

I spoke to Pacheco this week. He told me what he recalled about that moment, years ago, when the judge read the verdict and he learned that he’d go to prison:

“Honestly, I don’t remember much, but I remember saying to myself, I said uh, ‘Oh God, I can’t believe this.’ You know, and I was shocked.”

“And then I turned around. I looked at my son’s mom. She had the baby there. And she was there with her mother. And all I remember seeing was my son’s mom, um, getting up from the seat where she was sitting, crying, and walking away from the courtroom.”

I spent the Thanksgiving of Pacheco’s conviction year in the largest apartment I would ever occupy in New York: A rambling four-bedroom unit in Prospect Heights, which I rented from a colleague who was moving away to take another assignment, but was having a hard time selling the place in the wake of the Savings and Loan Crisis. There were so many rooms that some we just left empty.

Pacheco would spend his first prison Thanksgiving occupying a 6-by-9-foot prison cell. He was still just a teenager. He was still in shock that he had been convicted. As he said: “I’m missing my family, especially my son, you know, and my mother.” He stresses, “I left a baby behind, and that was the one that was killing me inside: that I left the mother of my child with my child, out there,” knowing, as he says, that he had nothing to do with the killing.

He was allowed just 10 minutes to scarf down a special “facility meal” for Thanksgiving. But, as Pacheco said, mustering a laugh, “But, believe me, it’s nowhere near the Thanksgiving you would have out here.”

Over the years, he learned to cope with the loneliness and sadness of incarcerated holidays the best way he knew how. For Thanksgiving he would decorate his cell with pictures of turkeys he cut from magazines and hang up pictures of his family.

Sometimes, one of the inmates who could cook would make a special meal. One year Pacheco says that his cellmate made a special meal of instant rice, squid or calamari and spices bought from the commissary, placed in a clear garbage bag and heated on the cell’s hotpot.

I spent all those years surrounded by friends and family and eating like a glutton.

(Indeed, four years after Pacheco’s conviction, I moved just six blocks away from where the murder had occurred and stayed there almost the entire time Pacheco was in prison.)

Pacheco said that he learned through his lawyers twice, sometime in 2007 or 2008, that the prosecution would hand him a plea deal if he would plead guilty to a lesser charge. They would consider the time he’d already spent in prison as time served, and he could go home. Both times he refused. As he told me: “I told the attorney at that time, I said, ‘No, I’m not doing that because they know that I didn’t do this.’ ”

Furthermore, as The New York Post reported in 2017, another man pleaded guilty in federal court to cutting the victim’s throat and “laid out the crime in a 2013 letter to the Brooklyn D.A.’s office.”

When we spoke this week, Pacheco told me about what he recalled about the moment this year when the judge read the ruling that freed him. “All I remember was looking back, and I saw my grandma and my mother tearing, you know. And, I just kept looking at them,” he said, adding, “I remember a few tears came down my own eyes.”

That is not to say this is the end of things. The Conviction Review Unit still asserts that there was “strong direct and circumstantial evidence” that Pacheco was involved in the incident and that he was “not factually innocent.” Pacheco says that he is still fighting to fully clear his name and has filled a $100 million lawsuit against New York State for unjust conviction and imprisonment.

Our sons are now both 26, his in the Navy and mine in medical school. As I talked to him all I could think of was all the memories I have of my son over those years, watching him grow up, and all those same opportunities for memories that were stolen from Pacheco.

When people complain about the restrictions that the pandemic has placed on our lives, when some go so far as to claim that it has unfairly stripped us of our rights and liberties, remember that there are people among us whose freedoms have truly been unfairly taken, people who would be happy if their only concerns were having to wear a mask and socially distance.

Pacheco was wrongly convicted, spent 25 Thanksgivings in prison, and he’s still thankful. As he told me:

“I’m thankful just to be home and be free, blessed to be able to do that with my family and my loved ones. And, when I say loved ones, I mean family and friends alike, you know what I mean. So, I am thankful for that. And, I give thanks to the most high, which is God, you know, and that he was able to make this happen. It doesn’t matter if it’s 25 years, 30 years, five years. What matters is that I’m out here now.”

Pacheco is now living with the woman he was seeing the night of the killing, the night that he himself was stabbed in the scrum, and they will spend Thanksgiving together.