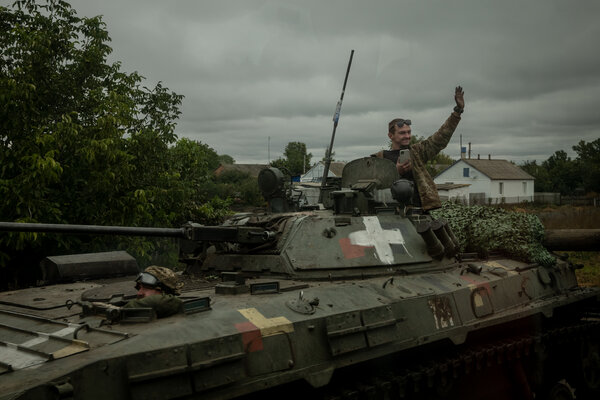 This column is rarely short of criticism of the Biden administration. So let me loudly cheer the fact that the staggering gains Ukrainian forces have made against Russia are a victory for Joe Biden, too.

Since the war began, I’ve had various deep-background conversations with people who have extensive knowledge of the ways the United States is aiding Ukraine’s war effort. It’s not just a matter of Javelin antitank missiles and Stinger surface-to-air missiles and HIMARS rocket launchers and M777 artillery and radar-seeking HARM missiles and other advanced systems. It’s that we are providing Ukrainians with the kind of battlefield intelligence that enables them to maneuver, target, strike and evade in ways they otherwise couldn’t.

We’ve become not just the arsenal of Ukrainian democracy but also its eyes and ears. What Ukraine initially lacked in overwhelming firepower, the United States made up for in precision. Now, as Russian units flee their positions and abandon equipment, Ukraine may be able to gain at least a temporary advantage in both precision and mass, creating a unique window for further decisive gains.

What to do next?

Beat the mud. The famed rasputitsa — the season of deep mud and impassable roads — may have helped save Kyiv in the early days of the war. Autumn mud in Ukraine tends to be less severe. But it generally favors defense over offense, a disadvantage for Ukraine now that tables are being turned and speed becomes essential to its strategy.

The mobility Ukraine will soon need will be in the form of airpower — advanced jet fighters, large combat drones, transport helicopters that can move special forces to strike behind Russian lines — as well as ground-fired rockets and missiles that can strike at longer ranges than the HIMARS. The U.S. Air Force has nearly four dozen aging F-16s slated for divestment this year. They should be in Ukrainian hands instead.

“Because Western support for Ukraine is essential to its potential for success, right now we have to create the perception that Ukraine has the upper hand,” the retired general Stanley McChrystal told me by phone on Sunday. “So anything we can provide in this near term, very overtly, things that people perceive as changing the likely balance, going forward,” will help, he added.

Beat the ice. Winter may largely freeze the front lines in place — another reason for Ukraine to press its combat advantage now. It’s also the period Vladimir Putin is counting on try to use energy blackmail against Europe, regenerate his military power (possibly with whatever help he can wangle from Xi Jinping during their meeting this week) and shore up his political base on the ultramilitarist right, which now seems to be turning on him.

That makes it essential to impress the Kremlin with a sense of psychological futility about its military prospects. A fast succession of military humiliations, like the loss of the city of Kherson, can convince Putin that time is not on his side and that an orderly retreat to prewar lines is a better alternative to a wholesale military rout followed by a wildly unpopular military draft.

Beat the thaw. If Russia continues to lose ground, it may seek a negotiated way out of the impasse. Many countries, particularly unreliable NATO allies like Hungary and inveterate diplomatic meddlers like France, will be eager to seize the opportunity for a cease-fire and willing to apply diplomatic and economic pressure on Ukraine to take a deal. But it would be immoral and shortsighted to allow Putin to keep any territories he’s gained since the war began.

“We shouldn’t let Russia walk out of this with anything that feels like a win,” McChrystal added. Above all, whatever concessions are made must be the sovereign, independent, uncoerced decision of Kyiv alone. That is, after all, why we have joined it in the fight.

Beat the horror. The fear in the back of everyone’s mind is what my colleague Ross Douthat notes could be a “Yalu River” moment, similar to Douglas MacArthur’s Korean War overreach, in which the Kremlin deploys battlefield nuclear weapons to stave off defeat and terrorize the rest of the world. That would be horrific, though it’s unclear what lasting advantages Moscow would derive from it. It would only be irradiating the soil it seeks to conquer and endangering its own troops and people with fallout.

This option has always been available to Putin, and the fact that it hasn’t been used is a good indication that he’s aware of its foolishness. Still, it might be smart for the Biden administration to alert Russians publicly to the consequences of the act.

On my list: Rapid Ukrainian accession to NATO. Seizure of all Russian reserves held abroad. A plan to again deploy nuclear-armed cruise missiles to our ships and submarines. A NATO no-fly zone over Ukrainian airspace. The provision to Ukraine of weapons that can strike deep into Russia. Whatever the actions, the response must be sufficiently pointed and plausible to sober up even the most committed Kremlin militarists.

As the war enters a new phase, it will inevitably bring new dangers. No danger is graver than failing to prevail. Full credit to Biden for getting, and acting on, the point.