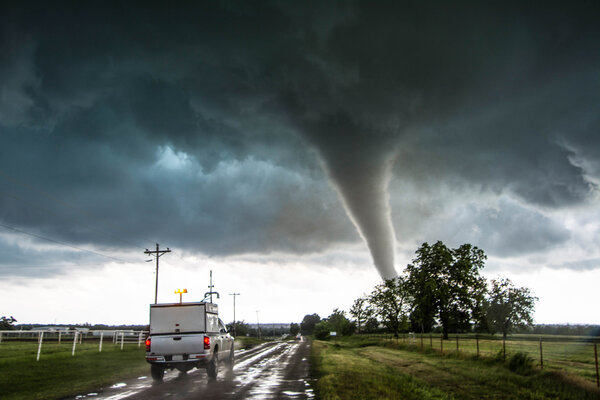 By James B. Elsner

Dr. Elsner is a professor at Florida State University in Tallahassee, where his research focuses on tornadoes, hurricanes and climate change.

I’m a tornado climatologist, and it is not unusual for people to ask me after a spate of storms like the ones that ripped through the center of the country on Friday whether climate change has anything to do with it. The answer is: It’s complicated.

We have started to detect changes in collective tornado activity, including more powerful storms, and are beginning to understand how these changes might be related to global warming. But much more work needs to be done to gain a fuller understanding of how the changing climate is influencing these deadly storms.

Let’s start with what we know. A tornado is a rapidly rotating column of air inside a thunderstorm. A thunderstorm that lasts more than 20 minutes and is energized by continuously rising air is called a supercell. The rising air is fueled by warm, moist conditions and changes in wind speed or direction associated with the approach of a frontal system where warm and cool air collide. The warm, moist air and that wind shear can generate a series of supercells, some of which produce tornadoes.

Connecting tornadoes to climate change is complicated because those twin conditions are necessary but not sufficient together for tornadoes to occur. A close-packed group of supercells, for instance, might produce straight-line winds rather than tornadoes. What’s needed to generate an outbreak of tornadoes — say, six to 10 of them — is ample heat, moisture and wind shear. But too much of any one or two of those conditions can disrupt the process of tornado formation.

Although tornadoes across the years do not appear to have become more common, an increasing percentage of them are occurring in outbreaks. The tornadoes that included Friday night’s so-called quad-state tornado — which crossed four states and devastated the town of Mayfield, Ky. — are an example of an outbreak. These are on the rise. On a day with at least one tornado, the chance that there are at least seven more increased to more than 15 percent on average by 2015 from 10 percent in 1990. These increases are even more substantial for larger outbreaks like the one that occurred on Friday night.

Here’s what we’ve also been seeing: A below average number of tornadoes this year; outbreaks becoming more common during cooler months in recent years; and tornadoes occurring more often across the Southeast compared with the Great Plains. Cities with the largest decreases in the number of strong tornadoes since 1984 include Dallas, Oklahoma City and Houston. Cities with the largest increases in the number of strong tornadoes since 1984 are Atlanta, Nashville and Augusta.

There is also evidence that tornadoes are getting stronger. Tornadoes are rated based on the severity of damage they inflict, using what’s known as the EF scale. The rating is made after the fact by forensic experts, and it depends on factors including the type of object struck and how the object was constructed.