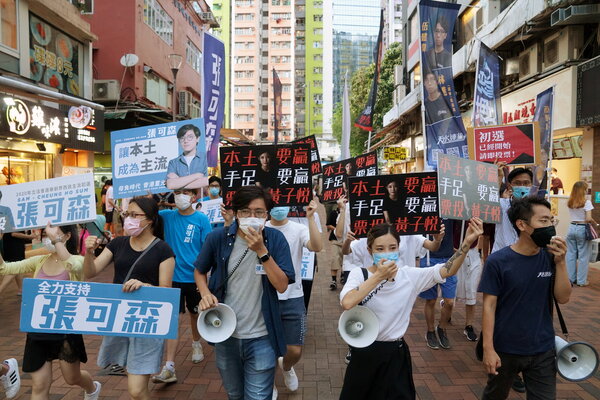 On Sunday, the Hong Kong authorities charged 47 pro-democracy activists with “conspiracy to commit subversion” against the Chinese government under the national security law it imposed on the city last summer. Beijing must be happy with the catch, which elegantly nets under a single accusation both advocates of outright independence for Hong Kong and the city’s old-school loyal opposition. The People’s Republic of China is safe now. Glory to its leader.

But what exactly was these criminals’ crime? Organizing or taking part in primaries in July ahead of legislative elections initially scheduled for September, and for daring to strategize. Were the pro-democracy camp to win a majority, some participants said at the time, it could vote down the government’s budget, possibly forcing it to resign. Under Hong Kong law, the chief executive must step down if the budget is defeated twice.

In the end, the authorities postponed the election, citing health risks because of the pandemic. (The opposition said the real reason was fear of a searing defeat.) And now the government is saying that what was a perfectly legal electoral strategy amounts to an act of subversion against Beijing, punishable by life in prison — possibly to be served out in China.

The onslaught continues in other ways, too. Journalists are being arrested for criticizing the Hong Kong government or investigating police brutality. Radio Television Hong Kong, the public broadcaster, can no longer show BBC programs. A student union is being silenced for its political views. The government is considering requiring district councilors — the vast majority of whom are in the political opposition — to pledge their loyalty to Beijing or else be disqualified.

Why is Beijing still going after Hong Kong so hard when the repression generates pushback from much of the world?

One explanation is that there is a gap between China’s national interests and the personal ambitions of its leader, Xi Jinping.

Mr. Xi seems intent on remaining president beyond his second term; he maneuvered to have term limits eliminated in 2018. His many titles and powers today — he also is general secretary of the Chinese Communist Party — exceed those of any of his predecessors, including even Mao, who founded the communist republic. Yet to stay on, Mr. Xi must deliver something monumental.

And he is not measuring up.

Mr. Xi’s claim to have eradicated poverty in China has been given the lie by no less than Premier Li Keqiang, who said last year that the income of some 600 million people — nearly 43 percent of the population — wasn’t “even enough to rent a room in a medium Chinese city.” Corruption has worsened despite Mr. Xi’s aggressive anti-graft campaign, according to some international rankings. China’s G.D.P. growth rate has been declining steadily since 2010.

Struggling to score points on domestic issues, Mr. Xi has tried to double down on flagship projects abroad. With checkered results.

Mr. Xi’s signature Belt and Road Initiative has caused some participating countries to ask for debt relief, even as major Chinese banks seem to be scaling back their investments in the project. His government’s increasing claims over parts of the South China Sea have antagonized countries in the region and drawn attention from the navies of the United States and its allies.

The trade and technology wars waged by President Donald J. Trump have put Mr. Xi on the defensive. Huawei, after being carefully nurtured into a linchpin of China’s tech industry, is in free fall and selling assets. The European Union may have been criticized for signing in December the Comprehensive Agreement on Investment with China despite the human rights violations in Xinjiang, but to anyone who reads the fine print, the agreement reveals significant concessions from Beijing, notably opening up access to its market for manufactured goods.

Then there are the big prizes closer to home: Taiwan and Hong Kong. Any forceful military move against Taiwan would be risky, and failure would doom Mr. Xi’s career. The lower-hanging fruit is to bring Hong Kong back into Beijing’s fold: China’s president is plucking away at that one.

Yet even that is tricky because it could destroy Hong Kong’s standing as the freest conduit of goods, capital and people between the Chinese mainland and the West. That loss would be colossal for Beijing, and there is evidence that Mr. Xi’s adversaries in the Chinese Communist Party, particularly the political heirs of President Jiang Zemin, have reacted with unease and have made Mr. Xi feel threatened.

One implicit indication of that is his pushback. Here is a telltale example: China’s official news agency, Xinhua, put out in mid-December a stern commentary against “America-worshiping soft-bone patients,” calling them “capitulationists,” a term from the Mao era used to denounce the disloyalty of party members suspected of having bought into Western ideology.

A fundamental strategy of Deng Xiaoping’s, China’s leader from 1978 to 1989, was to run Hong Kong with a relatively light hand until the city’s full reversion to Chinese control in 2047, and in the meantime to exploit what Hong Kong would offer the mainland, before turning the table on the West. But Mr. Xi, who is eager to score a historic victory before his term is up, is accelerating the time table.

However fast he moves, though, Mr. Xi will not manage to smother the opposition in Hong Kong. He will only transform it.

The national security law did put an end to protests, it is quelling open calls for Hong Kong’s independence or simply its right to self-determination and it is silencing much of the formal opposition. But a wing of the pro-democracy movement is quickly building up overseas, buoyed by the stream of political emigrants leaving the city. This diaspora will help sustain resistance back home, however subdued that branch of the movement might seem to become.

The drive to redefine a Hong Kong identity that is politically, culturally and linguistically independent of the mainland’s has gained momentum over the last decade, and it will only accelerate. Expect the pro-democracy movement to move even further away from the ethos of the 2014 Umbrella Revolution, with its Gandhian pacifism and its calls for respecting political rights.

Many of the activists I know might not say so openly for fear of repression, but a new spirit seems to be animating them, especially the young: the right to rebel forcefully against an unjust government, much like, for example, during the American Revolution against the British in the late 18th century.

The Hong Kong resistance’s means of mobilization keep adapting to Beijing’s repression. Think insects with I.T.-based weaponry; think autonomous swarms: an ever-larger collection of small units, each with its own objectives and action plans but all bent on fighting the puppet home regime and replacing it with a democracy.

Many such swarms are multiplying overseas. Several are lobbying host governments to enact sanctions against the C.C.P.; others are building networks among Hong Kongers in the diaspora. Some are trying to set up a shadow Parliament.

Still more activists abroad are working quietly — and many in Hong Kong have gone silent, even underground.

The Hong Kong authorities know this, of course, and they aren’t leaving anything to chance. They are considering, for example, criminalizing the possession of firearm components after some people in Hong Kong reportedly received gun parts in the mail from overseas. In other words, the authorities are worried about armed rebellion. But if an armed rebellion ever erupts, only Beijing, and mostly Mr. Xi, will be to blame.

Yi-zheng Lian, a commentator on Hong Kong and Asian affairs, is a professor of economics and a contributing opinion writer.