Good morning. Why is there a big debate over the filibuster? Because it benefits one political party much more than the other. 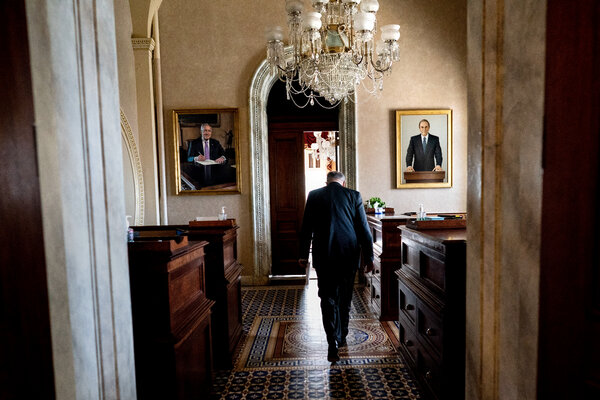 If you examine the history of the filibuster — a Senate rule requiring a supermajority vote on many bills, rather than a straight majority — you will quickly notice something: It has benefited the political right much more than the left.

In the 1840s (before the term “filibuster” existed), Senator John C. Calhoun of South Carolina used the technique to protect slavery.

Over the next century, Southern Democrats repeatedly used the filibuster to prevent Black Americans from voting and to defeat anti-lynching bills.

From the 1950s through the 1990s, Senate Republicans, working with some conservative Democrats, blocked the passage of laws that would have helped labor unions organize workers.

The early days of Joe Biden’s presidency, with the Democrats narrowly controlling the Senate, have intensified a debate over whether the party should eliminate the filibuster. If Senate Democrats did, they could try to pass many bills — say, on climate change, voting rights, Medicare expansion and tax increases on the rich — with 51 votes, rather than 60.

As part of the debate, many observers have pointed out that both parties have used the filibuster, and both could suffer from its demise. Democrats, for example, filibustered some of President George W. Bush’s judicial nominees, as well as abortion restrictions and an estate-tax cut. A Senate without the current filibuster really would cause problems for Democrats at times.

On balance, however, there is no question about which party benefits more from the filibuster. Republicans do, and it’s not close.

This makes sense, too. Consider the words conservative and progressive. A conservative tends to prefer the status quo, while a progressive often favors change. “The filibuster is a tool to preserve the status quo and makes it harder to make change,” Adam Jentleson, a former Democratic Senate aide and the author of “Kill Switch,” a new book on the filibuster, told me. (I’m reading the book now and recommend it.)

Jentleson documents that the country’s founders did not intend for most legislation to require a supermajority and that the filibuster emerged only in the 1800s. Alexander Hamilton and James Madison both wrote passionate defenses of simple majority rule. They protected minority rights by creating a government — with a president, two legislative chambers and a judiciary — in which making a law even with simple majorities was onerous.

“What at first sight may seem a remedy,” Hamilton wrote, referring to supermajority rule, “is, in reality, a poison.” If a majority could not govern, he explained, it would lead to “tedious delays; continual negotiation and intrigue; contemptible compromises of the public good.”

The filibuster isn’t going anywhere yet. Some past Democratic supporters of the filibuster — like Senator Jon Tester of Montana and Biden himself — have said they might consider eliminating it if Republicans continued to reject compromise. Others — like Joe Manchin and Kyrsten Sinema — say they remain opposed.

But the issue won’t be decided in the abstract, as the Republican strategist Liam Donovan has noted. When the Senate is next considering a specific bill that has the support of a majority but not a supermajority, that will be the crucial moment.

Related: Jamelle Bouie, a Times Opinion columnist, has made cases for scrapping the filibuster. In The Washington Post, Carl Levin, a former senator, and Richard Arenberg have made the case for keeping it. And Molly Reynolds of the Brookings Institution has described how it might be reformed.

Biden said the U.S. government was nearing a deal with Pfizer and Moderna to increase its order of vaccine doses from 400 million to 600 million by the end of the summer. But this may not accelerate the current pace of vaccination for a few months.

So far, 6 percent of the U.S. population has received a first vaccine dose and 1 percent has gotten both doses. Here’s how the vaccine rollout is going.

Britain and the European Union are feuding over how to share available vaccine doses.

Hong Kong’s first virus lockdown is in a working-class neighborhood, raising questions about whether residents are being treated fairly.

Forty-five Republican senators voted to dismiss the new impeachment charges against Donald Trump, arguing that the Senate cannot try a former president. It’s a sign that conviction is unlikely.

The Capitol Police apologized for failing to prevent the Capitol riot, acknowledging that the agency had known that there was a “strong potential for violence” and was slow to act.

Chuck Schumer, the Senate majority leader, signaled that Democrats could try to pass Biden’s pandemic relief plan through the budget reconciliation process, which requires only a majority vote.

In their first phone call as fellow presidents, Biden and Vladimir Putin agreed to extend the last remaining nuclear arms treaty between their countries, but Biden also confronted Putin on several topics, including Russian election interference.

“The call was, in essence, the opening act of what promises to be a deeply adversarial relationship between the two leaders,” The Times’s David E. Sanger and Anton Troianovski write.

Biden plans to announce executive actions today to deal with climate change, but hurdles lie ahead. Here are four things to watch for.

Kamala Harris, the first female vice president, swore in Janet Yellen, the first woman to be Treasury secretary. (Fun fact: Yellen is also the first woman who has had all three top economic jobs in the government.)

Thousands of farmers protested in New Delhi over India’s new laws that critics say will leave small farmers at the mercy of corporate giants.

A former mayor of Seoul who disappeared and died in July had sexually harassed and verbally humiliated a secretary, a human rights watchdog concluded.

Two people died in a medical office in Austin, Texas, in a hostage standoff that lasted more than five hours.

Marty Baron, whose journalistic instincts were celebrated in the Oscar-winning movie “Spotlight,” will retire as executive editor of The Washington Post. “Keep at it,” he wrote to the newspaper’s staff.

Trilobites: The Spinosaurus, a dinosaur with some water-loving features, roamed the earth 99 million years ago. Today, researchers are wondering: Was this creature more subaquatic killer or giant wading bird?

From Opinion: The writer Stuart Thompson spent weeks inside a QAnon chat room, and here’s what he heard. And Iran’s ambassador to the U.N. has an Op-Ed on reviving the 2015 Iran nuclear deal.

Lives Lived: After a bicycle accident left her paralyzed in 2003, the feminist scholar Christina Crosby wrote a memoir, “A Body, Undone,” which explored pain and refused to draw tidy lessons about overcoming hardship. She died at 67.

The price of college

The list price at selective private colleges approaches a mind-blowing $80,000 a year, and it’s not far behind for out-of-state students at some public colleges in the U.S. But as Ron Lieber, a personal-finance columnist for The Times, notes, “list prices are increasingly irrelevant for most families.”

Middle-class and low-income students typically receive large scholarships — and can receive larger ones if they have excellent grades in high school. Even affluent students can receive a lot of financial aid with top grades.

Ron has just published a book that tries to explain the maddeningly complex subject of college finances, called “The Price You Pay for College.” In it, he makes a fascinating point: Many parents talk in great detail with their children about the ways in which sports can earn them college acceptances and scholarships.

Yet athletics are not the best route to a scholarship for most students, Ron writes. Academics are. “Each spring, I hear from otherwise well-informed parents of high school seniors who had no idea that this so-called merit aid existed, let alone how to predict where good grades might yield the lowest price or the best value,” Ron told me. “I wanted to make sure that families knew all about it, much sooner.”

You can read an excerpt here.

This vegetarian kofta curry is a saucy dish that’s delicious with rice or flatbread.

The writer Durga Chew-Bose reviews “Let Me Tell You What I Mean,” a collection of essays by Joan Didion from 1968 through 2000.

Trying to learn more about the wonders of science? These seven podcasts will help answer questions like whether there’s any scientific basis to astrology, and whether lab-grown meat can replace the real thing.

Teachers share tips on how to get outside more this winter.

The pangram from yesterday’s Spelling Bee was logotype. Today’s puzzle is above — or you can play online if you have a Games subscription.

And attention quiz fans: You have until noon Eastern today to submit a question for this week’s News Quiz.

P.S. Astead Herndon, a national political reporter for The Times, spoke with Slate about covering Trump and the work of journalists of color.

Today’s episode of “The Daily” is about why virus infections are falling, and if it will last. On a bonus episode of “Sway,” The Times’s Kevin Roose discusses Substack.

Claire Moses, Ian Prasad Philbrick, Tom Wright-Piersanti and Sanam Yar contributed to The Morning. You can reach the team at th[email protected].