Good morning. The next few months could be rough for the U.S. economy — but better times might not be far off. 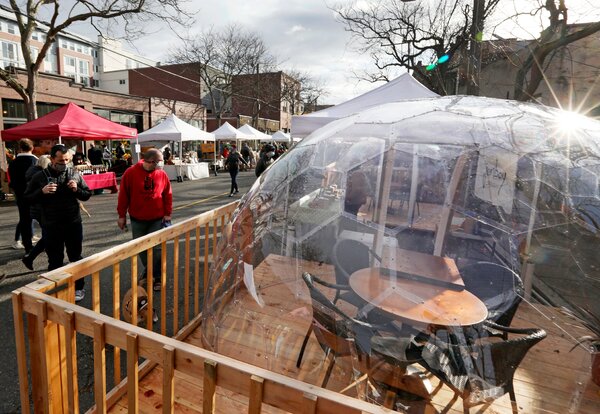 The next few months have the potential to be very unpleasant for the American economy.

Many states are reimposing coronavirus restrictions, which will likely lead to new reductions in consumer spending and worker layoffs. As Jerome Powell, the Federal Reserve chairman, recently said, “We’ve got new cases at a record level, we’ve seen a number of states begin to reimpose limited activity restrictions, and people may lose confidence that it is safe to go out.”

Adding to the economic risks, several of the government’s biggest virus rescue programs are scheduled to expire next month. It isn’t clear whether Congress will renew them, because congressional Democrats and Republicans disagree on how to do so. Democrats favor a larger rescue package than Republicans do.

Without a new stimulus package, a double-dip recession is possible. In an analysis circulating among President-elect Joe Biden’s aides, the research firm Moody’s Analytics predicted that the economy would shrink during both the first and second quarters of 2021, and the unemployment rate would approach 10 percent next summer, up from 6.9 percent last month.

Many Americans would draw down their savings or struggle to pay medical bills. Some would lose their homes and go bankrupt. Recessions cause permanent damage to people’s lives, which is one reason that Fed officials and many economists support further stimulus.

A lack of government support, Powell has said, may lead to “tragic” results with “unnecessary hardship.” Loretta Mester, the president of the Cleveland Fed, has called the lack of another stimulus package “very concerning.”

The longer-term picture is more encouraging, though. There is reason to hope that the next economic recovery, whenever it comes, will be stronger than the frustratingly weak recovery after the 2007-2009 financial crisis.

Why? After that crisis, many households were coping with large debts. Today, household balance sheets are in better shape. And once a vaccine arrives, many Americans will be feeling a pent-up urge to spend — on vacations, business trips, restaurant meals, clothing, elective medical procedures, concert and sports tickets and more.

“It’s a good guess that we’ll get this pandemic under control at some point next year,” writes Paul Krugman, the Times columnist (and Nobel Prize-winning economist). “It’s also a good bet that when we do the economy will come roaring back.”

The bottom line: The forecasts for the virus and the economy have a lot in common. The country is headed into a grim period — one that will involve widespread illness, death and financial suffering (and that government policy has a chance to ameliorate). Yet the second half of 2021 promises better times.

After months of holding fairly steady even as cases surged, U.S. deaths from Covid-19 have begun rising in the past two weeks. Almost 1,500 Americans have died each day over the past week on average.

The drugmaker AstraZeneca is the third major vaccine developer that has announced promising results, saying that its coronavirus vaccine is 70 percent effective on average.

The U.S. is now well supplied with ventilators after a surge in production. But the country lacks specialists to operate the complex machines, and training can take years.

Senator Kelly Loeffler of Georgia, a Republican facing a runoff election in January, is quarantining after conflicting virus test results.

Biden plans to nominate Antony Blinken, a longtime foreign policy adviser, as secretary of state. Biden will announce Blinken and other cabinet nominees tomorrow. (Here’s Blinken on an episode of the Axe Files podcast from 2017.)

Biden’s inauguration will feature “scaled-down versions of the existing traditions” because of the virus, his incoming chief of staff, Ron Klain, said. It may also involve virtual elements.

President Trump’s campaign disavowed Sidney Powell, one of the president’s lawyers who has pushed false claims of voter fraud, after she made wild accusations that Republican officials had been involved in a vote-rigging scheme.

French police officers have interrogated at least 14 children and teenagers over accusations that they behaved inappropriately during a minute of silence for a teacher who was beheaded last month. Some of the children face charges of “defending terrorism.”

Florida officials are investigating the fatal shooting of two Black teenagers during an encounter with a sheriff’s deputy this month.

Guitar Center, the largest retailer of musical instruments in the U.S., has filed for bankruptcy.

Archaeologists found the nearly 2,000-year-old remains of two people frozen in time by the volcanic eruption that buried the ancient Roman town of Pompeii.

A Close Shave: For ski patrollers who provide emergency medical care, beards have long been the norm. But not this year: As face masks go on, the beards are coming off.

From Books: Barack Obama took nearly four years to publish his White House memoir — longer than any other president in the past century. One factor: He wrote the book himself.

From Opinion: After years of passively watching nationalist governments in Hungary and Poland undermine democracy, the European Union is finally fighting back, the Times’s editorial board writes.

Lives Lived: Pat Quinn learned he had A.L.S. a month after his 30th birthday. In 2014, he helped make the Ice Bucket Challenge a viral sensation, raising hundreds of millions to fight the disease. He died at 37.

Subscribers make our reporting possible, so we can help you make sense of the moment. If you’re not a subscriber, please consider becoming one today.

Last month, Netflix released “Emily in Paris,” a show about — you guessed it — an American woman living in Paris. It drew a big audience, even though critics panned it and many regular viewers complained about it while they watched it. As Kevin Fallon wrote in The Daily Beast: “‘Emily in Paris’ was so annoying. I can’t wait for more episodes.”

The show is an example of a growing genre on streaming services — what Kyle Chayka in The New Yorker called “ambient television.” Think of it as the TV equivalent of background music, something you can mindlessly watch while scrolling through your phone or doing household chores. “Emily in Paris,” Chayka added, “is soothing, slow, and relatively monotonous.” Netflix has already renewed it for a second season.

Other examples include interior decorating shows like “Dream Home Makeover” and foodie programming like “Taco Chronicles.” They are partly a response to prestige shows like “Mad Men” and “Game of Thrones,” which both feature complex narratives that demand attention. Ambient TV, on the other hand, lets viewers relax. It makes sense that in a year marked by a pandemic and political anxiety, people are turning to something that’s entirely uncomplicated for entertainment. It taps into what New York magazine’s Kathryn VanArendonk calls “the desire for comfort.”

Served on warm tortillas with a simple salsa, these fish tacos are a flavorful throwback to summer.

Oxford has announced its 2020 Word of the Year, and … there is no winner. Instead of a single word, Oxford is highlighting the ways the pandemic has changed how we speak.

Looking for some escapism? Scrolling through real estate listings in far-flung locations on the website Zillow offers a way to visualize an alternate life, whether you’re trying to move or not.

The pangram from Friday’s Spelling Bee was mothball. Today’s puzzle is above — or you can play online if you have a Games subscription.

P.S. Times subscribers can join Book Review editors and the actress Mindy Kaling this morning at 9:30 Eastern for the unveiling of this year’s 10 Best Books.

Today’s episode of “The Daily” is about the closure of New York City’s schools. On the latest Book Review podcast, A.O. Scott talks about Joy Williams’s fiction.

Lalena Fisher, Claire Moses, Ian Prasad Philbrick and Sanam Yar contributed to The Morning. You can reach the team at [email protected].