Good morning. Cases are still rising during this wave of the pandemic. Deaths are probably not far behind. 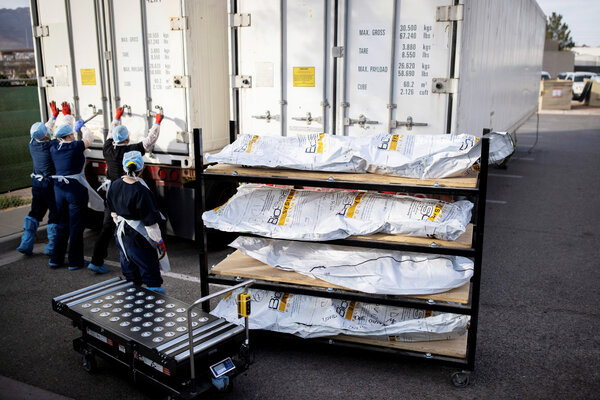 The number of Covid-19 deaths in the U.S. has dropped in the last few days, but there is reason to think the decline is a statistical mirage — and that deaths are on the verge of surging again.

Why? The relationship between confirmed new coronavirus cases and deaths has held fairly steady this fall. If you track the number of new cases, you can fairly accurately predict the number of deaths three weeks later. Every 100 new cases in the U.S. has led to an average of about 1.7 deaths, with that three-week lag.

It’s not a precise equation, of course. The time between diagnosis and death in fatal cases is sometimes shorter than three weeks and sometimes longer. And the death rate is not exactly 1.7 percent. But that simple formula has done a striking job of describing the path of Covid deaths in recent weeks.

The chart here shows the relationship — daily deaths compared with an index equal to 1.7 percent of newly diagnosed cases from three weeks earlier. The two lines have risen almost in tandem for the past three months:

The most likely explanation for the tick down at the end of both lines is the statistical mirage I mentioned: There was a slowdown in testing over Thanksgiving weekend, which may have artificially reduced the number of both reported coronavirus cases and deaths. “Thanksgiving has really blurred the picture,” Mitch Smith, a Times reporter who tracks the virus statistics, told me.

In coming weeks, deaths seem almost certain to rise, perhaps sharply. The run-up in cases during November suggests that daily deaths may approach 3,000 in December. The previous one-day high was 2,752, in April, and the previous high in the seven-day average was 2,232, also in April.

Already, the U.S. death toll in recent weeks has exceeded one victim every minute of every day — 1,462 deaths per day in the two weeks before Thanksgiving. Barring a major surprise, that toll is about to get even worse. And January is looking worrisome, as well.

Dr. Anthony Fauci, the infectious disease expert, said yesterday that Thanksgiving gatherings may have created clusters of new infections. “We might see a surge superimposed upon that surge that we’re already in,” Fauci said.

An explainer: Andrew Joseph of Stat walks through the timeline of how an infection turns into a serious illness.

The governor of Colorado, Jared Polis, tested positive. At least seven governors have contracted the virus.

Patients tend to be at their most infectious for about seven days — two days before they first show symptoms and five days after — according to a new analysis. The C.D.C. has recommended that infected people isolate themselves for at least 10 days, but is considering shortening that period.

The Denver Broncos ordered all four quarterbacks on their roster to quarantine after one of them tested positive. A wide receiver and running backs had to take snaps instead, and the Broncos completed only one pass in the game, which they lost, 31-3.

New York’s Sheriff’s office shut down a party in Manhattan over the weekend that had more than 400 people inside. Only a few were wearing masks.

President-elect Joe Biden plans to announce his nominees for top economic spots this week. Among the picks: Cecilia Rouse, a Princeton labor economist, to run the Council of Economic Advisers; and Neera Tanden, who has led the liberal think tank Center for American Progress, to run the Office of Management and Budget.

Biden named an all-female White House communications staff, including Jennifer Psaki — a veteran of the Obama administration — as press secretary.

Biden slipped and suffered hairline fractures in his foot while playing with one of his dogs over the weekend, his doctor said. He is likely to require a walking boot for several weeks.

On a related note, the Bidens may get a cat. The last cat to live in the White House was India, who belonged to George W. Bush.

Wisconsin finished its partial recount of the presidential election results, reaffirming Biden’s more than 20,000-vote lead over President Trump in the state.

Pressure is mounting on Gov. Gavin Newsom of California to appoint someone to fill Vice President-elect Kamala Harris’s Senate seat. Alex Padilla, California’s secretary of state, has emerged as the front-runner.

Customs and Border Protection officials are rushing to meet Trump’s goal of constructing 450 miles of his proposed wall on the U.S.-Mexico border before he leaves office. Biden has said he hopes to halt construction of the wall.

Argentine authorities searched the home and offices of Diego Maradona’s doctor as part of an investigation into the soccer star’s death last week.

The Supreme Court will hear arguments today on Trump’s efforts to exclude unauthorized immigrants from calculations used to allocate House seats. A ruling for the administration could shift political power from Democratic states to Republican ones.

Nike, Coca-Cola and other companies are lobbying Congress to weaken a bill that would ban imported goods made with forced labor in China’s Xinjiang region. The companies fear the bill would disrupt supply chains for raw materials like cotton and sugar.

California’s governor has blocked the release of Leslie van Houten, a Charles Manson follower who is serving a life sentence for her role in a double murder in 1969.

So many toadstools: It’s been a bumper year for Ukraine’s mushroom crop. The fungi are a staple in the country, and some families have begun selling them to stay afloat during the pandemic. “Mushrooms saved so many people this year,” one mushroom hunter said.

From Opinion: The columnists Gail Collins and Bret Stephens hold their final Conversation of 2020.

Lives Lived: Dave Prowse provided Darth Vader’s imposing physical presence in the original “Star Wars” trilogy. But the filmmakers replaced his voice with that of James Earl Jones — perhaps because of Prowse’s thick Bristol accent, which earned him the nickname “Darth Farmer.” Prowse has died at 85.

Subscribers make our reporting possible, so we can help you make sense of the moment. If you’re not a subscriber, please consider becoming one today.

“Hillbilly Elegy,” J.D. Vance’s best-selling memoir of growing up in Ohio with family roots in Appalachia, has been a signature book of the Trump era. The movie version — released last week on Netflix, starring Glenn Close and Amy Adams — has been less successful.

Many critics have panned it as simplistic, painting rural American life with overly broad strokes. It “understands rural poverty mostly via iconography — rundown houses and kids in swimming holes and the like,” Emily VanDerWerff writes in Vox. In The Times, A.O. Scott says the film pretends to link the characters to “something bigger without providing a coherent sense of what that something might be.”

In the conservative publication The Bulwark, Sonny Bunch writes that many liberal critics are too harsh on the movie but agrees that it suffers from “lack of focus and muddled messaging.”

After Netflix announced its involvement with the project last year, Meredith McCarroll, a professor at Bowdoin College who has written about Appalachia, wrote that the movie’s release might have one silver lining: to spark discourse about the richness of life within the region, rather than accepting any one portrait of it.

“I hold out some hope,” McCarroll wrote in the Columbia Journalism Review, “that more attention to Appalachia might make space for debate, and debate might shed some light on the wild range of life that is happening right now in those mountains: angry protests and mournful music and joyful poetry and determined activism, all derived from and leading to a love of place.”

“In the Mood for Love,” a romantic drama that is a great entry point into the work of the director Wong Kar-wai.

Look at how guitars are made by touring a factory.

These are Christmas cookies for the modern era. Make, mix and match these reimagined classics (or let the videos mesmerize you).

The pangram from Friday’s Spelling Bee was enveloped. Today’s puzzle is above — or you can play online if you have a Games subscription.

P.S. The word “cheerlebrities” — cheerleaders with large social media followings — appeared for the first time in The Times yesterday, as noted by the Twitter bot @NYT_first_said.

Today’s episode of “The Daily” is about what we know about the distribution of a virus vaccine. On the latest Book Review podcast, Book Review editors discuss the 10 Best Books of 2020.

Lalena Fisher, Claire Moses, Ian Prasad Philbrick and Sanam Yar contributed to The Morning. You can reach the team at [email protected].