By Carole Landry and Dani Blum

We’re covering Japan’s third wave of coronavirus, a grim report on an elite Australian unit that served in Afghanistan and the fall of an Indian fashion star. 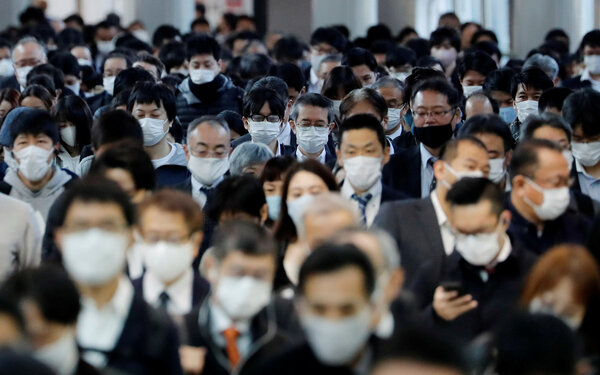 Japan recorded more than 2,000 new coronavirus cases on both Wednesday and Thursday, its highest levels to date, as the country steels itself for a third wave. Prime Minister Yoshihide Suga put the country on “maximum alert” and urged vigilant mask wearing, particularly while dining out.

Tokyo also broke its record for case numbers on Wednesday and again on Thursday, with more than 500 infections per day.

While Japan’s total numbers are low compared with those in many other countries, infections are spiking rapidly. A panel of experts working for the Tokyo government said the current surge was the most alarming yet because, unlike prior waves, which mostly affected young people, the current one has also hit middle-aged and older people.

Related: Despite climbing infection rates across the globe, the president of the International Olympic Committee says the Games will go on next summer in Tokyo and will be “the light at the end of this dark tunnel.”

The U.S. has surpassed 250,000 deaths from the coronavirus pandemic. Cases are rising in every state except Hawaii, and health experts are warning of dark months ahead.

The World Health Organization said that case rates in Europe were falling for the first time in months, signaling that new restrictions are working.

Africa, in its second surge, has reached over two million confirmed cases, though low testing means the numbers could be higher.

‘Disgraceful’ conduct by an Australian unit in Afghanistan

The Australian military on Thursday released the findings of a groundbreaking four-year inquiry into the actions of the 2nd Squadron of the Army’s Special Air Service Regiment on the battlefields of Afghanistan.

Calling out “possibly the most disgraceful episode in Australia’s military history,” the report paints a brutal picture of the elite special forces unit, which rewarded the killing of civilians and prisoners in Afghanistan and covered them up. The inquiry found that 39 Afghans had been unlawfully killed in the period studied, from 2005 to 2016.

While the report stops short of calling the killings war crimes, it represents the first time that a member of the U.S.-led coalition in Afghanistan has so publicly accused its own troops of wrongdoing on such a scale.

Details: Commanders ordered junior soldiers to execute prisoners so they could record their first “kill.” Adolescents, farmers and other noncombatants were shot dead in circumstances clearly outside the heat of battle. Superior officers created such a godlike aura around themselves that troops dared not question them.

Next steps: The report calls for the criminal investigation of 19 soldiers. Australia’s military chief said he would disband the unit.

Mike Pompeo on Thursday became the first U.S. secretary of state to visit an Israeli settlement in the occupied West Bank and the disputed Golan Heights, a territory that Israel captured from Syria and later annexed illegally.

Mr. Pompeo declared that the Trump administration now viewed an international campaign to boycott Israel as anti-Semitic and said that the U.S. would deny government support to groups that embrace B.D.S. — the boycott, divest and sanctions movement.

His visit was cheered by Israel’s right wing but denounced by the Palestinians.

Context: Mr. Pompeo’s string of photo opportunities could be highly useful if he were to seek the Republican nomination for president in 2024. White American evangelical Christians, whom Mr. Pompeo has courted, are much more likely than other Americans to believe the gathering of Jews in Israel is foretold in the prophecy of Christians ascending into heaven.

Related: Palestinian officials are eager to make a fresh start with the incoming administration of President-elect Joe Biden. A first step could be ending the “pay to slay” compensation that the Palestinian Authority gives to those serving time in Israeli jails.

If you have 7 minutes, this is worth it

Over the past two decades, leftist parties helped Hugo Chávez and then President Nicolás Maduro stay in power. But these allies have grown disillusioned with Mr. Maduro’s authoritarianism and corruption. The widespread discontent erupted in more than 1,000 flash protests in September.

Now, critics of Mr. Maduro say he’s turned the state’s security forces against the leftists who criticize him.

Uganda protests: At least 7 people were killed and 45 others wounded during violent demonstrations on Wednesday following the arrests of two presidential candidates. One of the candidates, the popular musician-turned-lawmaker Bobi Wine, was arrested on accusations that his rallies had breached coronavirus rules.

Indian fashion star’s fall: Manish Arora was the first designer from his country to break into the global luxury market. But after years of financial struggles and chaotic deals, his business is in tatters.

Snapshot: Above, Armenians at the last religious service at the Davidank monastery in Kelbajar, a district in Nagorno-Karabakh. Last week, after a six-week Azerbaijani offensive, the ethnic Armenians who had lived in the region since capturing it in 1993 fled, many of them burning their houses as they left.

Dogs in China: After receiving complaints about pet dogs biting children in Yunnan Province, officials have instituted a ban on dog walking, and have threatened to kill any dog whose owner flouts the law three times. The news has set off howls of outrage and fierce debate across the country.

What we’re reading: This profile of Trevor Noah in GQ. “It’s a compelling piece on how growing up in apartheid-era South Africa shaped the comedian’s approach to America’s tumultuous 2020,” writes Dani Blum, of the Briefings team.

Cook: This lemon garlic kale salad is rich with tang and crunch. Serve it as a snappy, fresh side dish or a light supper.

Do: Consider the proposal-less marriage. Some couples who already live together and share bank accounts are skipping the traditional celebrations.

The weekend is just around the corner, and our At Home collection has oodles of ideas on what to read, cook, watch and do while staying safe at home.

Lisa Selin Davis is the author of “Tomboy,” a book about how children’s exploration is stymied by gender norms. She spoke to our In Her Words newsletter about the sexism in kids’ lives. Here’s an excerpt.

What’s the long-term impact of having different stuff for boys and girls?

The more you segregate toys, the more you develop different skill sets and funnel them into different ways of being in the world. Girls’ clothes, for example, aren’t made for climbing and sports.

How does the “pink/blue divide” play out?

By age 3, kids are trying to perfect the stereotypes they’ve learned. When you show kids counterstereotypes, when you tell them that cars are for girls, girls like cars. Most kids like what they think they’re supposed to like.

How is the embrace of tomboys linked to misogyny?

The message that girls should have access to boyhood came with a disdain for whatever’s marked as feminine. When kids say, “I hate pink,” what they’re saying is, “I hate what’s associated with girls.” Girls learn the gender hierarchy and start pushing this stuff away to make them seem cooler. By 6, they’re internalizing sexism.

Does “tomboy” exist in other languages?

Yes, more than 40 non-English languages have their own version. “Wildfang” in German, “garçon manqué” in French, “erkek fatma” in Turkish.

That’s it for this briefing. See you next time.

Thank you
To Theodore Kim and Jahaan Singh for the break from the news. You can reach the team at [email protected]

P.S.
• We’re listening to “The Daily.” Our latest episode is about the pandemic economy.
• Here’s our Mini Crossword, and a clue: “Dang it!” (four letters). You can find all our puzzles here.
• The trailer is out for “Some Kind of Heaven,” a new documentary on The Villages, a retirement community in Florida, produced by The Times with Magnolia Pictures.