We’re covering new virus restrictions for England, an E.U. agency’s complicity in illegal anti-migrant practices and the thousands displaced by the conflict in Tigray, Ethiopia. 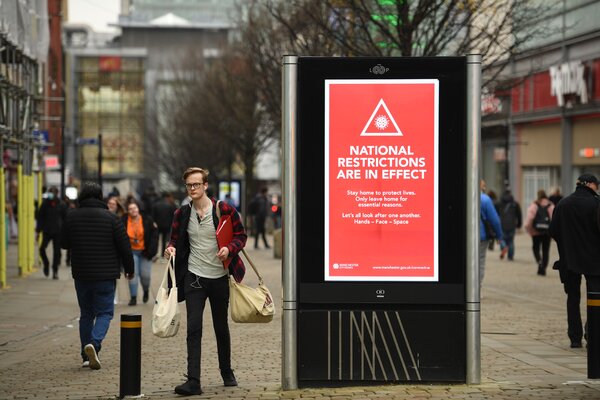 Under fire from critics over the economic and social cost of his coronavirus restrictions, Prime Minister Boris Johnson will bring a grueling, second, national lockdown in England to an end next week, replacing it with a three-tier system of region-specific rules.

One flash point in the new rules: trips to the pub. For the more than 23 million people who live in the most restricted tier, visits to their local will be off-limits, disappointing patrons and depriving the beleaguered hospitality sector of critical revenue in the weeks leading up to Christmas.

Already, members of Mr. Johnson’s own party have pushed back against the new pub rules and vowed to vote against the three-tier plan when it goes to Parliament for approval next week.

“I have severe reservations on so many different levels,” said Graham Brady, who chairs the influential 1922 committee of Conservative backbench lawmakers. “I do think that the policies have been far too authoritarian. I think they have interfered in people’s private and personal lives in a way which is unacceptable.”

Related: After being caught unawares by England’s first lockdown, the country’s playhouses have successfully pivoted to streamed performances and other digital offerings.

Since unveiling the preliminary results of its vaccine trial with the University of Oxford, the pharmaceutical company AstraZeneca has acknowledged a key mistake in the vaccine dosage received by some study participants.

Coronavirus cases in the U.S. have reached record highs, with an average of more than 176,000 a day over the past week. Deaths are soaring, with more than 2,200 announced each day on Tuesday and Wednesday, the highest daily totals since early May.

With German authorities registering an average of more than 18,000 new infections a day, Chancellor Angela Merkel and state governors agreed to stricter rules and an extension of the country’s partial lockdown through December.

A pilot program will allow a limited number of passengers to travel across the Atlantic to Rome from Atlanta without having to quarantine upon arrival.

Mounting evidence indicates that the European Union’s border agency has been complicit in Greece’s illegal practice of pushing back migrants to Turkey, according to documents obtained by The New York Times and interviews with officials.

In at least one case, Frontex, as the E.U. border agency is known, is accused of having helped cover up the violations, when a crew said it was discouraged by agency officials from reporting that they had seen the Greek authorities setting a boatload of migrants adrift in Turkish waters.

The case is currently being investigated by Frontex. But it has fueled suspicions not only that the agency, newly amplified in its role as upholder of the rule of law at E.U. borders, is sporadically aware of such abuses, but also that it plays a role in concealing them.

Salvaged treasure: An Algerian couple who survived the capsizing of a boat on its way from Libya to Europe last month will be reunited with the wedding rings the couple had lost in the shipwreck in which five people died. Rescuers recovered the bands in a backpack floating in the Mediterranean, and an Italian newspaper helped with the search.

Just over three weeks ago, Prime Minister Abiy Ahmed of Ethiopia unleashed his military forces in an attempt to subdue the country’s northern region of Tigray, whose rebellious governing party was until recently the dominant force in Ethiopia’s central government.

On Thursday, Mr. Ahmed ratcheted up the conflict, ordering what he called a “final” military assault on Tigray’s capital and announcing that the deadline had passed for leaders of the governing party, the Tigray People’s Liberation Front, to surrender.

“The last peaceful gate which had remained for the T.P.L.F. clique to walk through have now been firmly closed,” Mr. Ahmed said in a statement on Twitter.

Repercussions: Already, hundreds of people have been reported dead in the fighting, and 40,000 refugees have crossed into neighboring Sudan, according to the United Nations. Humanitarian organizations have also warned of fuel and food shortages and large numbers of civilian casualties in the region.

Opinion: Mr. Ahmed has become the protagonist of a familiar story in Africa, which is written in blood by politicians in pursuit of power, writes the novelist Sulaiman Addonia, a former child refugee.

If you have 5 minutes, this is worth it

Race to the bottom

Earlier this month, the Slovenian free diver Alenka Artnik, above, set a record in women’s free diving, traveling more than 300 feet beneath the surface of the ocean, in a feat not for the faint of heart, or lung.

Her commanding performance, after only a few years in the sport, suggests that she may yet be capable of going deeper still.

President Erdogan: A Turkish court on Thursday sentenced hundreds of defendants suspected of involvement in the failed 2016 coup to multiple life terms, at the culmination of one of the most important mass trials in the plot to overthrow the country’s leader.

Death penalty: The U.S. Justice Department has created new regulations allowing for the use of more methods for federal executions, including firing squad and electrocution. The new rule comes as the administration rushes to execute five more prisoners before the end of President Trump’s term.

SCOTUS: In a 5-to-4 ruling, the Supreme Court this week rejected restrictions on attendance at religious services in New York to combat the coronavirus, revealing the extent to which President Trump has transformed the court. Justice Amy Coney Barrett cast the decisive vote, in what was almost certainly a taste of things to come.

Snapshot: At a moment of national peril, with cases of the coronavirus at record highs, layoffs rising and incomes falling, Americans celebrated a highly subdued Thanksgiving on Thursday. As with everything in 2020, the Macy’s Thanksgiving Day Parade, above, a ritual marker of the holiday, was also drastically different.

Lives lived: The extravagant British soccer agent Eric Hall, who moved from promoting bands like Queen and the Sex Pistols to hustling for top players throughout the 1980s and ’90s, died this week at 73 from the coronavirus.

What we’re reading: The author Michael Schuman’s meditations for Bloomberg Businessweek on adjusting to life with a white cane, as his vision fades. “I couldn’t put this down,” writes Sui-Lee Wee, a reporter for The Times.

Cook: The addition of roasted leeks, lemon peel, almonds and white beans turns this baked rice into a vegetarian dinner worth savoring.

Watch: Our list of the 50 best movies on Netflix right now has something for everyone.

Travel, virtually: Tour 52 places around the world. Admire some abstract architecture. And foster the spirit of travel at home.

Settle in. At Home has our full collection of ideas on what to read, cook, watch and do while staying safe at home.

What Times readers are thankful for

Last week, the writers of the newsletter The Morning asked readers to send us six words describing what made them thankful in 2020, in homage to the six-word memoir popularized by the author Larry Smith.

Here is a selection of some of the responses, out of more than 10,000:

The backyard haircuts are getting better.

My choir still meets on Zoom.

Saved a lot of lipstick money.

This stinking year is nearly over.

Still ridin’ my horse at seventy.

Ambulance took him. He came home.

Hearing granny laugh on the phone.

It’s just a cold, not Covid.

My wife gave me her kidney.

Wasn’t too late to say sorry.

Wildfires took much but we survived.

Pandemic baby after years of trying.

At twelve weeks, size of lime.

I watched her learn to read.

Thankful for learning, in my pajamas.

Out of prison with great job.

Stole my car, not my books.

248 cocktail hours with my mom.

The freedom of filing for divorce.

Postponed wedding, having a baby instead.

I proposed and she said yes.

Thanks for joining me this week. See you on Monday.

P.S.
• “The Daily” will be back next week. Until then, we’re listening to “This American Life”: Here’s seven outstanding episodes, as selected by Ira Glass, the show’s host.
• Have a go at today’s Mini Crossword puzzle. A clue to get you started: Fuzzy buzzers (four letters). You can find all our puzzles here.
• The word “vaccaccino” appeared for the first time in The Times this week, in an article about AstraZeneca’s vaccine trial, as noted by the Twitter bot @NYT_first_said.
• The Times received seven nominations, including four for our Op-Docs, for the 2020 Annual IDA Documentary Awards.