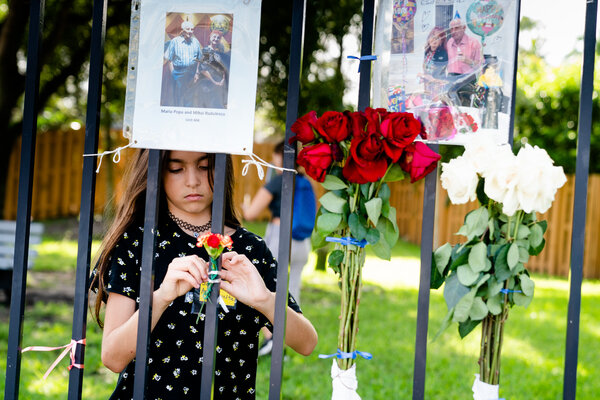 Four days after a residential building north of Miami Beach partially collapsed, rescuers searching around the clock have found only a handful of bodies and scattered human remains amid the wreckage. The death toll has risen to nine, and more than 150 people are still missing.

The search has been painstakingly slow: A fire beneath the rubble has hampered efforts, and rescuers have had to balance their own safety with their search. More than 300 emergency personnel are working 24 hours a day, and the Army Corps of Engineers has been called in to help. Still, some families are beginning to lose hope.

Experts who have examined video footage of the disaster are focusing on a spot in the complex’s lowest part — possibly in or below the underground parking garage — where an initial failure could have set off a structural avalanche.

Next door: Concern about the stability of other buildings has spread across South Florida, where salt air tends to eat away at steel and concrete structures. Building inspectors at the sister condo complex nearby determined that it was structurally sound, a condo board member said, though some wary residents nonetheless packed bags and found other places to stay.

Pope Francis encouraged compassion and tenderness in a handwritten letter to a leader in the Roman Catholic Church’s effort to reach out to L.G.B.T.Q. people. But a growing dissonance has developed between his inclusive language and the church’s actions.

The Vatican indicated last week that it had grave concerns about legislation in the Italian Parliament that would increase protections for L.G.B.T.Q. people. Days later, the Vatican’s second in command insisted that the church had nothing against gay rights, but that the bill could lead to criminal discrimination charges for basic church practices.

Francis’s note adds to the political confusion over whether he is a liberal trying to reform the church or just a social conservative trying to please everyone, our Rome bureau chief writes.

Background: In 2016, Francis famously responded “Who am I to judge?” on the issue of gay Catholics. More recently, he has expressed support for same-sex civil unions. But in March, the church’s top doctrinal office — with Francis’s support — denied Catholic clergy the authority to bless gay unions.

Dozens of climbers on Mount Everest have given firsthand accounts of being infected with the coronavirus, but Nepal, which relies on tourist revenue, has refused to acknowledge any cases.

By the end of the climbing season earlier this month, at least 59 infected people had been on the mountain, according to interviews with climbers and expedition companies and the personal accounts of social media users.

Nepal’s tourism department, which oversees Everest expeditions, has dismissed these accounts, calling one climber a pneumonia patient, even as people were being airlifted off the mountain and expeditions were being canceled.

Context: Nepal, one of the world’s poorest countries, has been struggling with a dire coronavirus outbreak and a shortage of vaccines. As the government pleads with wealthy nations for doses, less than 3 percent of the population has been fully inoculated.

Some U.S. teenagers are defying their parents and being vaccinated.

Indian doctors worry about a new, more virulent version of the virus: Delta Plus.

The British health minister resigned after photos surfaced of him embracing a senior aide — an apparent violation of social distancing guidelines.

In French regional elections, the parties of both President Emmanuel Macron and Marine Le Pen struggled, suggesting the presidential election next year may be more wide open than it seemed.

A Frenchwoman who killed her abusive stepfather-turned-husband will serve no further time in prison, a decision that could set a precedent for domestic violence cases.

The trial of two prominent figures in Jordan accused of plotting to destabilize the kingdom has become a showcase of regional rivalries in the Middle East. Above, Mohammad Afeef, a defense lawyer who represents the former royal adviser Bassem Awadallah.

Three aid workers for Doctors Without Borders were found dead in the Tigray region of Ethiopia.

In a wave of “red tourism,” Chinese tourists are flocking to Chinese attractions to take in a sanitized and sometimes misleading version of the history of the Communist Party before its July 1 centennial.

Serena Williams, a four-time gold medalist, indicated that she would not play in the Tokyo Olympics next month. If you’re looking for some names to root for (or against) in the Summer Games, here are a few to start with.

Native Americans, who were forced onto marginal land, now bear an undue burden from climate change.

In honor of Pride Month, President Biden signed a law that created the National Pulse Memorial at the site of a gay nightclub in Florida where a gunman killed 49 people in 2016.

The restoration of Mosul’s most famous landmarks is seen as essential to the idea that the Iraqi city has moved on from its battle against the Islamic State four years ago. But some critics say the plan betrays Iraq’s heritage.

“It’s a fiasco, honestly,” said Ihsan Fethi, one of Iraq’s best-known architects, of the competition to redesign the complex surrounding Al-Nouri mosque, whose damaged Al-Hadba minaret is above. “The whole thing has been a terrible tragedy for us.”

Facing down the threat to the planet

What if political systems, in the U.S. and internationally, fail to curb climate change? It’s a daunting, but not unreasonable, question, writes my colleague Ezra Klein in our Opinion section.

Ezra convened a panel of climate experts to try to comprehend the scale of the emergency. This is an edited extract from their conversation.

Is there some possibility of a technological path where we avert the worst consequences of climate change just because innovation is beginning to accelerate so rapidly?

I think it’s very unlikely that you get there with technology alone. I have a lot of optimism that by around 2024 the cost of solar, electric vehicles, batteries, wind and heat pumps convincingly give us the opportunity to save money on everything, basically everywhere.

We can make everyone’s energy future cheaper, but politics has to work with technology, which has to work with finance. — Saul Griffith, of both Otherlab and Rewiring America, a nonprofit that promotes rapid electrification to meet our climate goals.

Geoengineering hasn’t traditionally been part of the Green New Deal. Should it be?

People who live near places where geoengineering would happen are very afraid of the ecological consequences. Given our general orientation toward a desire for a silver bullet that doesn’t require much change in how power is distributed, I fear that a lot of money will go there and not toward other things that we know would help but are more difficult to do. — Rhiana Gunn-Wright, climate-policy director at the Roosevelt Institute and an author of the Green New Deal.

We are not equally responsible for emissions. The word “Anthropocene” imagines that there’s a single anthropos and that the ages of humanity are measured according to its collective actions. And I think people’s lived experience is not of a singular humanity but of one that’s very much stratified and unequal.

So, will people mobilize on a sufficient scale to make the hard choices? For some people, it’s not a hard choice. They’re already living at a subsistence level. So what are you going to tell them to do? — Sheila Jasanoff, professor of science and technology studies at the Harvard Kennedy School.

The autobiographical novel “Who They Was,” about life in British public housing and prison, is relentlessly bleak. It had to be, its author says.

That’s it for today’s briefing. Thanks for joining me. — Natasha

P.S. Ryan Mac, formerly of BuzzFeed and Forbes, is joining The Times to report on tech accountability.

There’s no new episode of “The Daily” today. Instead, on the Book Review podcast, Clint Smith talks about his new best seller, “How the Word Is Passed.”