We’re covering border tensions and crackdowns on protests in Afghanistan and a deadly prison fire in Indonesia. 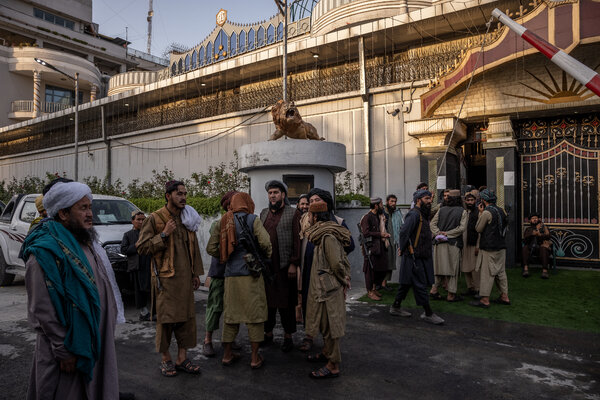 A day after the Taliban named an acting cabinet to lead the nation they spent two decades trying to conquer, the dizzying challenges that accompanied victory were coming into sharp relief.

Demonstrators have been subject to abuse in overcrowded jails in recent days. Several Afghan journalists who were covering a protest on Wednesday said they were arrested and beaten in custody. An official said that protests now had to be approved in advance and warned journalists not to cover the protests because they are “illegal.” But a day later, demonstrators were once again taking to the streets.

On Afghanistan’s border with Pakistan, the Pakistani Army has continued to shell suspected militant hide-outs in recent days, according to Taliban and Pakistani officials. In northeastern Afghanistan, mortar strikes injured at least four people.

And the humanitarian crisis was only getting worse, with food and cash shortages stymying people’s abilities to get basic supplies. Most international aid is likely to be tied to whether the Taliban can follow through on promises not to offer a safe haven for terrorists.

South Korea reported more than 2,000 new Covid-19 cases on Wednesday, approaching last month’s record and concerning health officials who were aiming to reopen the country in the next few months.

The increase in cases came just days after the country eased some of its social distancing regulations as coronavirus cases appeared to be declining. Health officials said pandemic fatigue contributed to the spread because not everyone had been adhering to the restrictions.

The timing of the spike is of particular concern as South Koreans approach Chuseok, a three-day national holiday later this month when families will be able to travel to see one another.

The health authorities are hoping that cases will drop enough to resume a more normal life by November, when they expect 70 percent of the population to be fully vaccinated. Roughly 61 percent of South Koreans have received at least one vaccine dose and more than 36 percent are fully vaccinated.

The Palestinian Authority banned weddings, mourning tents and other gatherings to stem a coronavirus outbreak in the occupied West Bank, where an average of 1,074 infections have been recorded daily over the past week.

Amid a slow vaccine program, Australia’s contacts with Pfizer have come under scrutiny.

Covax, a program to distribute Covid vaccines, cut its 2021 forecast for available doses by a quarter.

A group that organizes annual events to remember those killed during the 1989 crackdown in Beijing’s Tiananmen Square said several of its leaders were arrested on Wednesday after it refused to provide information for a police investigation.

The group, the Hong Kong Alliance in Support of Patriotic Democratic Movements of China, said the police had sought details about its funding and membership for an inquiry into whether it was acting in collusion with foreign powers.

At least four members of the group were detained on Wednesday, including its vice chairwoman, Chow Hang Tung. Chow documented her impending arrest on Facebook. She added that the police had provided no explanation for why the group was suspected of violating the law.

Context: Under the city’s national security law, the police have broad powers to demand information from groups and individuals. Since it went into effect, more than 150 people have been arrested under it and more than 60 charged.

News From Asia and Australia

At least 41 people died and eight more were seriously injured in a prison fire west of Jakarta, Indonesia’s capital.

In its push to stamp out for-profit tutoring, China banned private tutors from giving classes online or in unregistered buildings like homes and coffee shops, Reuters reported.

Australia’s top court ruled that news outlets are liable for readers’ comments on their Facebook posts, and are therefore responsible for any defamatory comments that appear in them, The Wall Street Journal reported.

Despite a ruling from Mexico’s Supreme Court that abortion is no longer a crime, most women in the country still can’t get one.

The Biden administration aims to produce almost half of the nation’s electricity from the sun by 2050.

The trial of 20 men accused of involvement in the 2015 terrorist attacks in Paris began on Wednesday.

A longtime aide to Vladimir Putin died when he dove off a cliff trying to save a film director who had fallen into the water during an emergency drill in Russia’s Far North.

Britney Spears’s father, James Spears, filed a petition to end the conservatorship that has controlled her finances and much of her life since 2008.

The Times is exploring how the Sept. 11 attacks continue to shape us. One painful thread has been the rise of Islamophobia, with young Muslims in America growing up in the shadow of hatred and fear. “You are seeing the scaling of hate,” said Farah Pandith, who was the first U.S. special representative to Muslim communities in 2009. But the struggle birthed a generation determined to define their place in American life on their own terms, Elizabeth Dias writes.

A guide to the Theranos trial

Opening statements began in the trial of Elizabeth Holmes, the founder of the disgraced biotech company Theranos. Once the darling of Silicon Valley, Holmes faces fraud charges and up to 20 years in prison. Here’s what you need to know before the trial.

Holmes dropped out of Stanford at 19 to launch Theranos. By the time she was 31, Forbes had listed her as the youngest self-made female billionaire, and her face was plastered on magazine covers (including our own). But Theranos’s blood-testing technology didn’t work as advertised, and it all came crashing down after a series of reports in The Wall Street Journal in 2015 and 2016 detailed the company’s deceptions.

Her story is an extreme version of the “fake it till you make it” culture in Silicon Valley, The Times’s Erin Griffith and Erin Woo write, where companies often overpromise to generate interest from investors.

For more: John Carreyrou, the former Journal reporter who broke the story, is hosting a podcast about the trial. ABC’s “The Dropout,” another popular podcast, explores how Theranos fell apart, and HBO has a documentary on the scandal.

A creamy corn soup without any dairy? Yes, it’s possible.

Why does coffee sometimes make you tired?

In her memoir, “Beautiful Country,” Qian Julie Wang gives readers a child’s view on finding your way in a strange land. Read an excerpt.

You can find all of our puzzles here.

P.S. Ellen Pollock, The Times’s Business editor, was honored with the lifetime achievement award in this year’s Gerald Loeb Awards for Distinguished Business and Financial Journalism.

The latest episode of “The Daily” is about the Delta variant’s path through the U.S.

Matthew Cullen wrote the Arts and Ideas section and contributed to the news section. You can reach Melina and the team at [email protected].