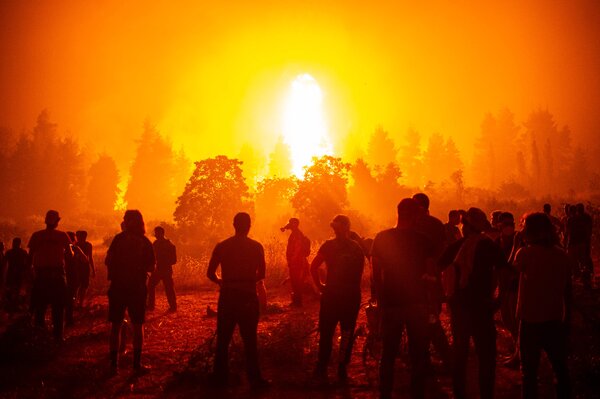 ‘A hammer hitting us on the head every day'

The release yesterday of a major U.N. climate report, which warned that limiting warming to about 1.5 degrees Celsius would require immediate, drastic cuts in emissions, has underscored the difficulty of the challenge ahead. Earth has already warmed by about 1.1 degrees Celsius, or about 2 degrees Fahrenheit. Here are the latest climate updates.

The report attributed essentially all of the rise in global average temperatures since the 19th century to humans burning fossil fuels, clearing forests and loading the atmosphere with greenhouse gases like carbon dioxide and methane that trap heat.

It has prompted outrage among vulnerable countries, whose leaders demanded that richer powers immediately reduce their emissions and help fund preparations for a perilous future.

Quotable: “What science is now saying is actually happening in front of our eyes,” said Malik Amin Aslam of the government of Pakistan, where temperatures exceeded 122 degrees Fahrenheit last year. “It’s like a hammer hitting us on the head every day.”

Disaster zones: Megafires in the western U.S. are sending out giant clouds of smoke and leaving a footprint much larger than the evergreen forests they level and the towns they decimate. And in Turkey, Greece and other parts of Europe, catastrophic wildfires yesterday entered a second week.

U.S. borders remain closed to most European travelers during the pandemic, even those fully vaccinated. The White House has offered little explanation as to why the restrictions remain — even though some countries with higher infection rates and lower vaccination rates face no similar ban.

Under the current rules, virtually all residents of Europe’s Schengen Area, Britain and Ireland are still barred from traveling to the U.S. With fears of the Delta variant raging, there appears to be no end in sight, dismaying Europeans and frustrating the continent’s leaders, who are demanding that Europe’s decision to open its borders be reciprocated.

“We insist comparable rules be applied to arrivals in both directions,” Ursula von der Leyen, the president of the European Commission, said last week. Officials within the bloc have suggested reimposing travel restrictions against U.S. travelers.

Related: Canada reopened its borders to fully vaccinated citizens and residents of the U.S. for the first time since March 2020. But the reopening is only one way: U.S. officials have said they would not yet follow suit.

France began requiring proof of vaccination or a negative coronavirus test for access to cafes, restaurants, bars and long-distance trains.

The U.S. is averaging more than 100,000 new cases a day, as the highly contagious Delta variant sweeps across the country. See the latest charts here.

Ahead of the Beijing Winter Olympics, preparations far more intense than those for the Summer Games in Tokyo are taking place at dozens of venues in the Chinese capital.

The Pentagon will seek to make vaccinations mandatory for the country’s 1.3 million active-duty troops “no later” than next month, the Biden administration announced.

A sixth capital falls to the Taliban

Northern Afghanistan, once the heart of resistance to the southern Taliban insurgency, is collapsing at a terrifying pace. In just four days, the insurgents have seized six provincial capitals, with Aybak in Samangan Province falling to the group on Monday. The key northern city of Mazar-i-Sharif is now largely surrounded.

With the Taliban encroaching on Kabul — a bastion of government control amid the insurgents’ onslaught — many fear that no corner of the country will be spared. “The country is going back to the 1990s,” said Noor Agha, who fled to Kabul from Kunduz on Sunday. “We’re in another civil war now.”

The U.S. response has been muted, and the Biden administration has made it clear that America’s role in Afghanistan is over.

On the front lines: For the past month, Kandahar, Afghanistan’s second-largest city, has been under siege by Taliban fighters. Families stuck between them and government forces have almost nowhere to go.

News From the U.S.

The Biden administration says it will disclose long-classified documents that some families of the victims of the Sept. 11 attacks believe could link the Saudi government to the attacks.

The top aide to Gov. Andrew Cuomo of New York resigned, and one of the women who had accused Cuomo of sexual assault spoke in a televised interview. “It was not welcomed, and it was certainly not consensual,” she said of his behavior.

In an eight-hour news conference, Aleksandr Lukashenko, the strongman president of Belarus, lashed out at the West, calling Britain an “American lap dog” and taking credit for averting a new world war.

Virginia Giuffre, one of Jeffrey Epstein’s most prominent accusers, said in a lawsuit that Prince Andrew of Britain raped her when she was 17. A fund created to compensate the financier’s victims has paid out over $121 million to more than 135 people.

Infighting in South Sudan is tearing at the shaky governing coalition.

President Biden has made conversion to electric vehicles a pillar of U.S. climate policy. But unless they become significantly cheaper, they remain out of reach for most Americans.

Experts studying “Havana syndrome” — the mysterious illness affecting scores of U.S. diplomats and spies — are struggling to find evidence to back up the leading theory: directed microwave attacks.

The arrest in France of a Rwandan asylum-seeker facing deportation, on charges of killing a priest, has fueled criticism of the government’s immigration laws by right-wing politicians.

Two stories, one atomic bomb: Charles Loeb, above, was a Black war correspondent who defied the American military’s denials and propaganda to show how deadly radiation from the strike on Hiroshima had led to waves of death and lingering illness.

At the same time, William Laurence, a star reporter for The Times, became an apologist for the military and a serial defier of journalism’s mores.

The world of vegetarian cooking is vast and diverse, and our latest newsletter from The Times’s critic Tejal Rao celebrates exactly that. Here’s an excerpt.

By trade, I’m an omnivore. But when I cook at home, what I want more and more of is vegetables. I already knew that the pleasures of vegetarian cooking are endless, but I wanted a place to concentrate on it. So starting this week, I’ll be writing a new weekly newsletter: The Veggie.

On Thursdays, I’ll share vegetarian recipes and notes from my own kitchen, and from my colleagues. You can expect traditional dishes from long-established vegetarian cuisines, as well as adaptations and fun experiments, quick everyday recipes and special occasion dishes that require a bit more planning.

Despite my own inconsistencies when it comes to shopping and planning, vegetables always lead me to something delightful and satisfying. And that’s the thing about a good vegetarian recipe: It leads you to a delicious meal, then makes hundreds more possible.

Colorful fruit and vegetables may help curb the forgetfulness and mild confusion associated with advancing age. Why not start with this vivid roasted carrot salad?

In “Billy Summers,” by Stephen King, a hired killer is lured from retirement for one last job.

And here is the Spelling Bee.

That’s it for today’s briefing. See you tomorrow. — Natasha

The latest episode of “The Daily” is about schools and the Delta variant.