We’re covering the latest recommendation on the Johnson & Johnson shot, and the killing of Chad’s president, a key player in the West’s fight against Islamic extremism. 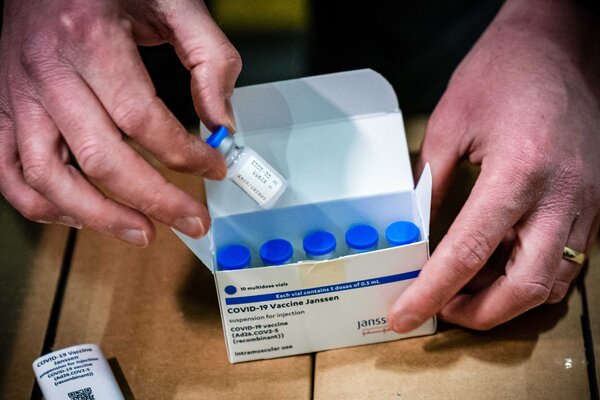 The European Medicines Agency said on Tuesday that a warning should be added to the Johnson & Johnson Covid-19 vaccine indicating a possible link to rare and unusual blood clots, but also said its benefits outweigh its risks.

The regulator did not recommend that the vaccine be pulled from use, the first indication that it might get back on track as a crucial component in the global vaccination campaign. Johnson & Johnson decided to delay its rollout in the E.U. last week, after U.S. regulators called for a pause.

The agency said that regulators in individual E.U. member states should decide how to proceed, taking into account their particular caseload and vaccine availability. Using already available data, regulators also said one possible explanation was that the rare side effect was an immune response.

Researchers in China are testing the safety and efficacy of mixing two different Covid-19 shots.

The World Health Organization representative in Cambodia has warned that a coronavirus outbreak there could spiral into a “national tragedy,” given the country’s poor health care services.

Xi’s veiled warning to the U.S.

Speaking virtually at China’s annual Boao Forum, Xi Jinping, the country’s leader, warned that the world should not allow “unilateralism pursued by certain countries to set the pace for the whole world.” The remarks were seen as directed at the U.S.

Mr. Xi said he opposed efforts to weaken dependence on China. “Attempts to ‘erect walls’ or ‘decouple’” would “hurt others’ interests without benefiting oneself,” he said. That appeared to be a reference to the Biden administration’s plans to support domestic high-tech manufacturing in the U.S.

Context: The White House held a meeting with business leaders last week to discuss a global shortage in semiconductor chips. President Biden talked about self-sufficiency and resiliency in supply chains.

Related: China’s chokehold over the global solar supply chain is forcing the Biden administration to make a tough choice: work with China on climate change, or exclude China until it addresses human rights issues in Xinjiang. Nearly half of the global supply of one key material used in solar panels comes from Xinjiang.

President of Chad is killed

President Idriss Déby, who ruled Chad with an iron fist for three decades, was considered by the West to be crucial in the fight against Islamic extremist groups, including Boko Haram, in central Africa.

The country’s armed forces said Mr. Déby, 68, was killed in clashes between insurgents and government soldiers one day after he claimed victory in his re-election bid. There were many questions surrounding Mr. Déby’s death.

What’s next: The late president’s son, Mahamat Idriss Déby, will take over as the head of a new military council that will rule for 18 months before new elections are held, a spokesman said.

Jurors in the trial of Derek Chauvin, a former Minneapolis police officer charged with murdering George Floyd, began their second day of deliberations on Tuesday.

Recent waves of attacks in Iran, believed to have been carried out by Israel, have exposed embarrassing security lapses.

Pakistan’s Parliament is expected to vote on Tuesday on whether to expel the French ambassador, a move seen as a capitulation to a militant Islamist party.

President Vladimir Putin of Russia is taking a harder line in confronting the West. His state of the union speech today could shed light on just how far he is prepared to escalate tensions.

China’s fine on Alibaba. E.U. limits on artificial intelligence technologies. U.S. officials who want to break up Amazon, Google and Facebook. Around the world, governments are moving to rein in the power of tech companies with an urgency that no single industry had experienced before.

This week, 12 teams — six from England (including Liverpool and Manchester United) and three each from Italy and Spain — announced they would drop out of a continentwide tournament to form a breakaway Super League. It’s an attempt to earn even bigger profits without worrying about failing to qualify for the Champions League every year.

“The proposal is the most seismic challenge to the European football model since its inception,” The Atlantic’s Tom McTague writes. Without 12 of the most glamorous teams, the Champions League will lose much of its luster and revenue. And although the 12 teams have said that they want to remain in their domestic leagues, the executives of those leagues are so angry that they may try to bar the teams. Politicians, like Boris Johnson of Britain, are angry, too.

“The breakaway clubs have, effectively, sealed off the summit,” The Times’s Rory Smith says. “It is what makes this such a compelling, and dangerous, moment.”

We’re covering the mounting opposition to the plan, and we have an explainer on what it entails. You can follow the story in Rory’s newsletter.

Leeks slow-cooked in olive oil are the star of this hearty vegetarian meal.

Each summer along the Alaska coast, millions of salmon begin their journey back to the rivers where they were spawned. See what it’s like.

Michelle Zauner, a musician who performs under the name Japanese Breakfast, wrote about the death of her mother in an essay for The New Yorker, “Crying in H Mart,” which led to a memoir by the same name.

P.S. The Times won a World Press Photo award for a project that documented the lasting impact of racist attacks on their victims.

The latest episode of “The Daily” is about a wave of anti-transgender legislation in the U.S.

Carole Landry and Sanam Yar contributed. You can reach Melina and the team at [email protected].