Chancellor Rishi Sunak has outlined a vision for how the UK can renew the country’s position as the “world’s pre-eminent financial centre” following Brexit.

As UK and EU negotiators continue to thrash out terms for a possible trade deal by the end of the transition period this year, he said green finance and digital currencies were among areas the “essential” sector should exploit in the wake of the COVID-19 crisis.

Among the chancellor’s commitments to the efforts is an intention, dependent on market conditions, to launch the UK’s first ‘green’ government bonds next year to raise money for low-carbon infrastructure projects and boost employment.

He said that in addition to green gilts, already deployed by France and Germany, the UK would be the first G20 economy to force listed firms to disclose progress on tackling their environmental footprints by 2025.

He argued it would bolster transparency and investor choice – hours after the Financial Conduct Authority confirmed that companies listed on the London Stock Exchange would have to improve disclosures on the risks they are facing from climate change from January.

The chancellor also confirmed a story by Sky News that the government was reviewing the UK’s listings regime to attract the most “innovative firms” – so-called tech unicorns – to the London stock market.

The COVID-19 crisis has seen the FTSE 100 hurt by its lack of exposure to tech firms with its constituents – mainly financial, mining and energy stocks – vulnerable to economic shock.

The chancellor said there would be a consultation too, included in the Financial Services Bill, on how new technologies like stablecoin cryptocurrencies – those pegged to an asset or assets – and Central Bank Digital Currencies could be regulated.

Mr Sunak also revealed how it would let EU financial services firms operate in Britain following the end of the Brexit transition period, accusing Brussels of dragging its feet on reciprocal arrangements. 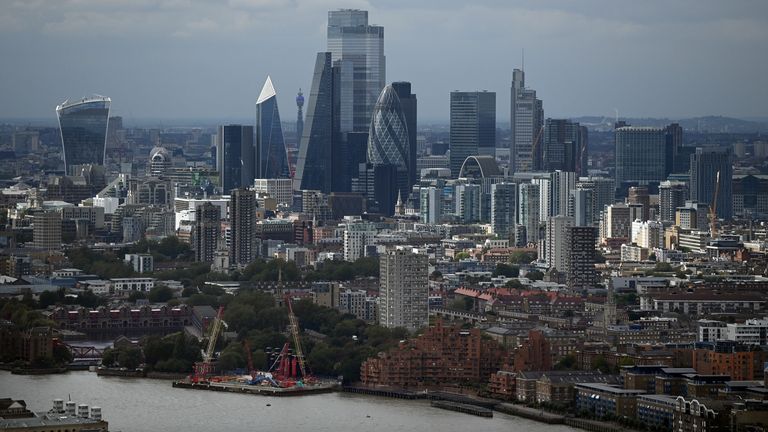 He said he would grant a package of equivalence decisions, across a range of financial activities to the EU and member states of the European Economic Area, regardless of what the bloc eventually decides.

“We are starting a new chapter in the history of financial services and renewing the UK’s position as the world’s pre-eminent financial centre.

“By taking as many equivalence decisions as we can in the absence of clarity from the EU, we’re doing what’s right for the UK and providing firms with certainty and stability.

“Our plans will ensure the UK moves forward as an open, attractive and well-regulated market, and continues to lead the world in pioneering new technologies and shifting finance towards a net zero future,” the chancellor said.

The package was seen as providing commitments to the emissions net zero target for the UK of 2050.

“Reaching an agreement with the EU is of critical importance. It will help businesses prepare and catalyse confidence by making outstanding issues, including data adequacy and regulatory equivalence, easier to resolve.

“Leading the way on sustainable finance initiatives, like green gilts, can drive progress towards net zero, fuelling a sustainable recovery.

“And active dialogue between enterprise and government can ensure smarter regulation – meeting the highest standards – along with new reporting requirements underline the UK’s status as a place to invest.”

Budget 2021: Chancellor accused of ‘not levelling with people’ over plans

Exxon and Macquarie in $11.7 billion U.S. lawsuit over gas contract