U.S.-China tensions, human rights and business are once again meeting uncomfortably on the basketball court.

In China, local brands are prospering from a consumer backlash against Nike, H&M and other foreign brands over their refusal to use Chinese cotton made by forced labor. Chinese brands have publicly embraced the cotton from the Xinjiang region, leading to big sales to patriotic shoppers and praise from the Beijing-controlled media.

In the United States, two of those same Chinese brands, Li-Ning and Anta, adorn the feet of N.B.A. players — and those players are being rewarded handsomely for it. Two players reached endorsement deals with Anta in February. Another signed on this week. Klay Thompson of the Golden State Warriors already had a shoe deal with Anta that has been widely reported to be valued at up to $80 million.

Dwyane Wade, the three-time N.B.A. champion and retired Miami Heat player, has a clothing line with Li-Ning that is so successful he has recruited young players for the brand.

Like the foreign brands in China, the league and its players could soon feel themselves squeezed between Washington and Beijing. Western companies are being pressured by American officials and lawmakers to respond to accusations of genocide in Xinjiang. But they face a consumer-driven backlash in China, where celebrities have severed ties with brands like Burberry and patriotic citizens have burned their Nike shoes on social media.

The N.B.A. and its athletes are familiar with the challenges of trying to stand up to China and maintain access to its nearly 1.4 billion consumers. Just two years ago, China exiled the N.B.A. from state media channels after the general manager of the Houston Rockets supported pro-democracy protesters in Hong Kong.

The league has so far avoided the latest round of controversy. That may not last for long.

“It’s hard to imagine celebrities and brand ambassadors being able to walk this line between those negative views of China in their home countries and the increasingly clear demands in China to publicly demonstrate the use of products made in Xinjiang,” said Natasha Hassam, director of the Public Opinion and Foreign Policy Program at the Lowy Institute in Australia. 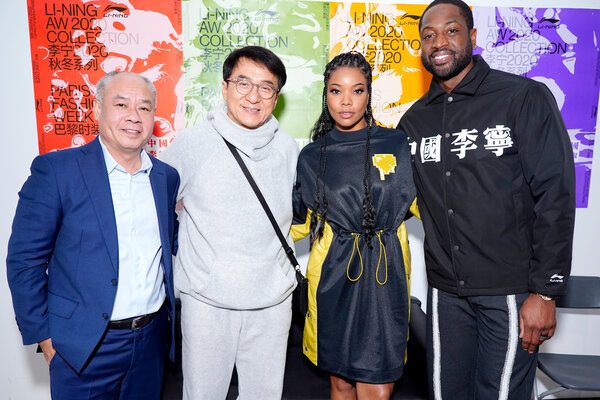 The Chinese companies themselves are unlikely to take a significant hit. The United States banned imports of products made from Xinjiang cotton in January, but neither Li-Ning nor Anta sells large numbers of shoes there. (They are available online, however.) Still, their full-throated support of Xinjiang could have reputational consequences for the American athletes.

“It is a simpler proposition for a Chinese celebrity to say I’m going to end my ties with X European company and probably be rewarded domestically for it,” Ms. Hassam said. “Americans looking to profit off China’s market find themselves in a much more challenging place.”

After Li-Ning and Anta published positive statements on Xinjiang cotton last week, investors in China sent the share price of both companies soaring. Chinese state media was quick to fuel the show of patriotism. At one point, a pair of Li-Ning shoes under Mr. Wade’s Way of Wade line traded for nearly $7,500.

But the statements could invite regulatory scrutiny on future business operations in the United States, said Brian J. Fleming, a lawyer specializing in sanctions at Miller & Chevalier Chartered.

“By speaking out, Anta and Li Ning are simultaneously supporting the Chinese government and thumbing their noses at U.S. restrictions, which is a combination unlikely to be greeted warmly by U.S. authorities,” Mr. Fleming said.

Anta and Li-Ning did not respond to requests for comment.

Mr. Thompson, one of the N.B.A.’s biggest stars, is known as “China Klay” to his Chinese fans and once said he wanted to be the Michael Jordan of Anta. His teammate James Wiseman, as well as Alex Caruso of the Los Angeles Lakers, signed with Anta earlier this year, according to the sportswear brand’s social media account. Precious Achiuwa of the Heat announced this week that he was joining Anta.

Requests for comment from Mr. Thompson and other N.B.A. players also went unanswered.

Outside China, Xinjiang has become synonymous with repression. Reports suggest as many as one million Uyghurs and other largely Muslim ethnic minorities have been held in detention camps. In March, Secretary of State Antony J. Blinken accused China of continuing to “commit genocide and crimes against humanity” in the far northwestern region.

The N.B.A. has powerful reasons to keep quiet on China. When Daryl Morey, the general manager of the Rockets, voiced his support for the Hong Kong protests on Twitter in 2019, Li-Ning and Shanghai Pudong Development Bank Credit Card Center paused their partnerships with the team. The Chinese Basketball Association, whose president is the former Rockets player Yao Ming, also suspended its cooperation with the Rockets.

Adam Silver, the N.B.A. commissioner, later said that the Chinese government had asked the league to fire Mr. Morey, a claim that the Chinese Foreign Ministry quickly denied. But the incident left a scar on the N.B.A.’s reputation for supporting free speech and severely limited its access to the Chinese market.

In a radio interview this week, Mr. Silver said that CCTV had stopped airing N.B.A. games again, but that fans could stream them through Tencent, the Chinese internet conglomerate. He said that the N.B.A.’s partnership with China was “complicated,” but that “doesn’t mean we don’t speak up about what we see are, you know, things in China that are inconsistent with our values.”

A spokesman for the league declined to comment for this article.

Money and a large China fan base are at stake for players like Mr. Thompson and the dozens of other American athletes who have been heavily promoted by Anta and Li-Ning. Mr. Thompson has had a partnership with Anta since 2014 that has given him a popular shoe line and sponsored tours in China.

More recent deals between the companies and N.B.A. players could face questions in coming weeks as tensions between the United States and China escalate. Jimmy Butler, a five-time all-star who plays for the Heat, and the Toronto Raptors guard Fred VanVleet signed on with Li-Ning in November. Mr. Wade, the retired Heat player, helped CJ McCollum and D’Angelo Russell, two star guards, secure deals with Li-Ning through his sportswear line.

“My decision 7 years ago to sign with Li-Ning was to show the next generation that it’s not just one way of doing things,” Mr. Wade wrote on Twitter when he announced Mr. Russell’s contract in November 2019. “I had a chance to build a Global platform that gives future athletes a canvas to create and be expressive.”

China to pilot property tax scheme in some regions -Xinhua