Uber has reported a loss of $2.9bn (£2.3bn) for the first quarter as the coronavirus took its toll, but said it saw encouraging signs in markets beginning to open up after lockdowns.

The Silicon Valley firm said its ride-hailing business had been “hit hard by the ongoing pandemic”, though its smaller Uber Eats division was buoyed by a surge in food deliveries.

Uber’s results come a day after it announced that it was to cut 3,700 jobs as the coronavirus had resulted in a slump in ride bookings.

But shares rose in after-hours trading following latest results, as chief executive Dara Khosrowshahi said bookings in the US started to recover last week as some states reopen following lockdowns.

Mr Khosrowshahi said: “While our rides business has been hit hard by the ongoing pandemic, we have taken quick action to preserve the strength of our balance sheet, focus additional resources on Uber Eats, and prepare us for any recovery scenario.

“Along with the surge in food delivery, we are encouraged by the early signs we are seeing in markets that are beginning to open back up.” 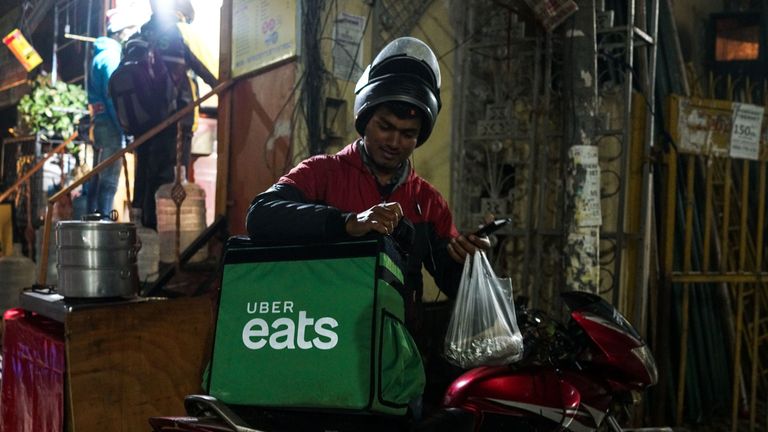 The bulk of Uber’s quarterly losses came from a $2.1bn (£1.7bn) writedown on the value of the company’s overseas investments including in Chinese ride-hailing giant Didi and Singapore-based Grab, as demand collapsed in the markets where they operate.

Uber has been battling to turn its rapid expansion into underlying profits by the end of this year but last month abandoned its guidance on annual financial results due to the uncertainty caused by COVID-19 pandemic.

The company’s loss of $2.9bn for the January to March period this year is nearly three times worse than the $1bn (£800m) loss reported a year earlier.

Uber Eats grew on both measures, with its revenue of $819m (£652m) up 53% compared to last year, though the pace of that expansion was slower than in the fourth quarter.