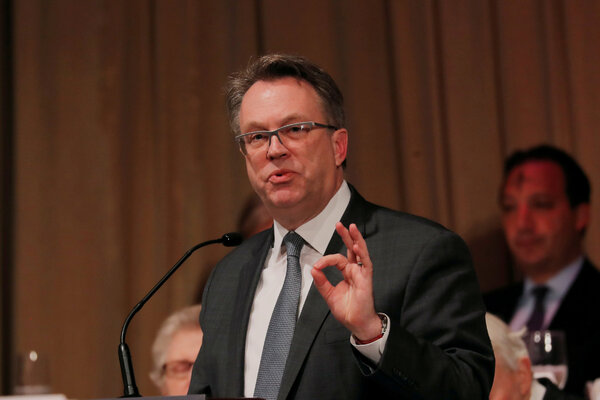 John C. Williams, president of the Federal Reserve Bank of New York, said on Monday that he expects the recent acceleration in price gains to prove temporary, and offered an optimistic view of the nation’s economic outlook as widespread vaccines and business reopenings drive growth.

Still, Mr. Williams cautioned “the data and conditions have not progressed enough” for the Fed’s policymaking committee “to shift its monetary policy stance of strong support for the economic recovery.” Mr. Williams was delivering remarks before the Midsize Bank Coalition of America.

“There is a lot of uncertainty out there,” Mr. Williams later said, while speaking to reporters following the event. “I see risk management as just part of any reasonable policy strategy. I do think there are risks to both sides.”

The Fed has held its policy interest rate at near-zero since March 2020 and is buying $120 billion in government-backed bonds each month, policies that are meant to keep many kinds of borrowing cheap, pushing money through the economy and bolstering demand. Jerome H. Powell, the Fed’s chair, indicated after the central bank’s June meeting last week that officials are beginning to talk about their plan for slowing those bond purchases as the economy recovers from a sharp pandemic hit.

Fed policymakers at that meeting also predicted they might lift interest rates earlier than they had expected, with more than half estimating two rate increases in 2023. Previously, officials hadn’t anticipated moving interest rates away from rock bottom until 2024, at the earliest.

Investors are now trying to parse that change and figure out what it says about how the Fed is thinking about its inflation goal. The Fed, which updated its inflation target last year, now aims for 2 percent inflation on average over time, meaning it will welcome periods of slightly-higher inflation to offset periods of weak price gains.

Mr. Powell played down the importance of individual Fed official forecasts for rate increases when he spoke last week. Mr. Williams, who is one of the Fed’s other most powerful and influential officials, joined him on Monday, highlighting that the committee does not discuss or vote on their economic projections.

The New York Fed president also shot down an idea that has taken hold among many Wall Street analysts since last week’s meeting — that the upgraded path for interest rates means the Fed is going to judge that its average inflation goal is satisfied by a big, but short lived burst in price gains this year.

“We chose consciously, and carefully chose, not to have a formula for the average inflation rate,” Mr. Williams said. “It’s not a specific formula.”

The Fed will be watching price gains over an unspecified time period and aiming for stable, well-placed inflation expectations, Mr. Williams said. He personally does not expect the current bout of higher inflation to last.

“My view is that the spike in inflation mostly reflects the temporary effects of the surprisingly rapid opening of the economy,” he said. There are risks both that inflation will be higher than wanted and that it could fall below the Fed’s goal, he added.

“You could see inflation coming in lower than expected,” he said, if supply chain disruptions reverse rapidly or if the global economic recovery lags. But that’s a possibility — not his forecast.

“I have a very positive baseline,” Mr. Williams said.