PARIS — Hermès on Thursday unveiled a store renovation that is almost as stealthy as its famously understated luxury clothes. Entering its striking flagship on Rue de Sèvres in Paris, you’d be forgiven for not immediately noticing it has undergone a one-year renovation.

Its central feature remains: three soaring huts made from curved slats of ash wood, set up in the center of what used to be a swimming pool. The only apparent change is a new nautical-themed fresco, which wraps all the way around over two floors, complementing the listed building’s Art Deco mosaics and ironwork balconies.

Look a little closer, and you realize the 14,000-square-foot store, opened in 2010, has been reorganized from top to bottom to house the brand’s evolving product lines, including its recently launched color cosmetics collection. Silk scarves and ties have been given pride of place in the entrance, and space for ready-to-wear and jewelry has been upped.

“It was a challenge to renovate this store, because it’s so incredible and unusual,” said Hélène Dubrule, managing director of Hermès Distribution France. “I think we have managed to maintain the fluidity of the space. You feel the air, the water and the light.”

Denis Montel of architecture firm RDAI, who came up with the store’s initial design, said his teams developed a whole new color palette and materials for the space. This included the deep green ceramic tiles, reminiscent of the 1930s, that outline the new combined café and bookstore on the ground floor. 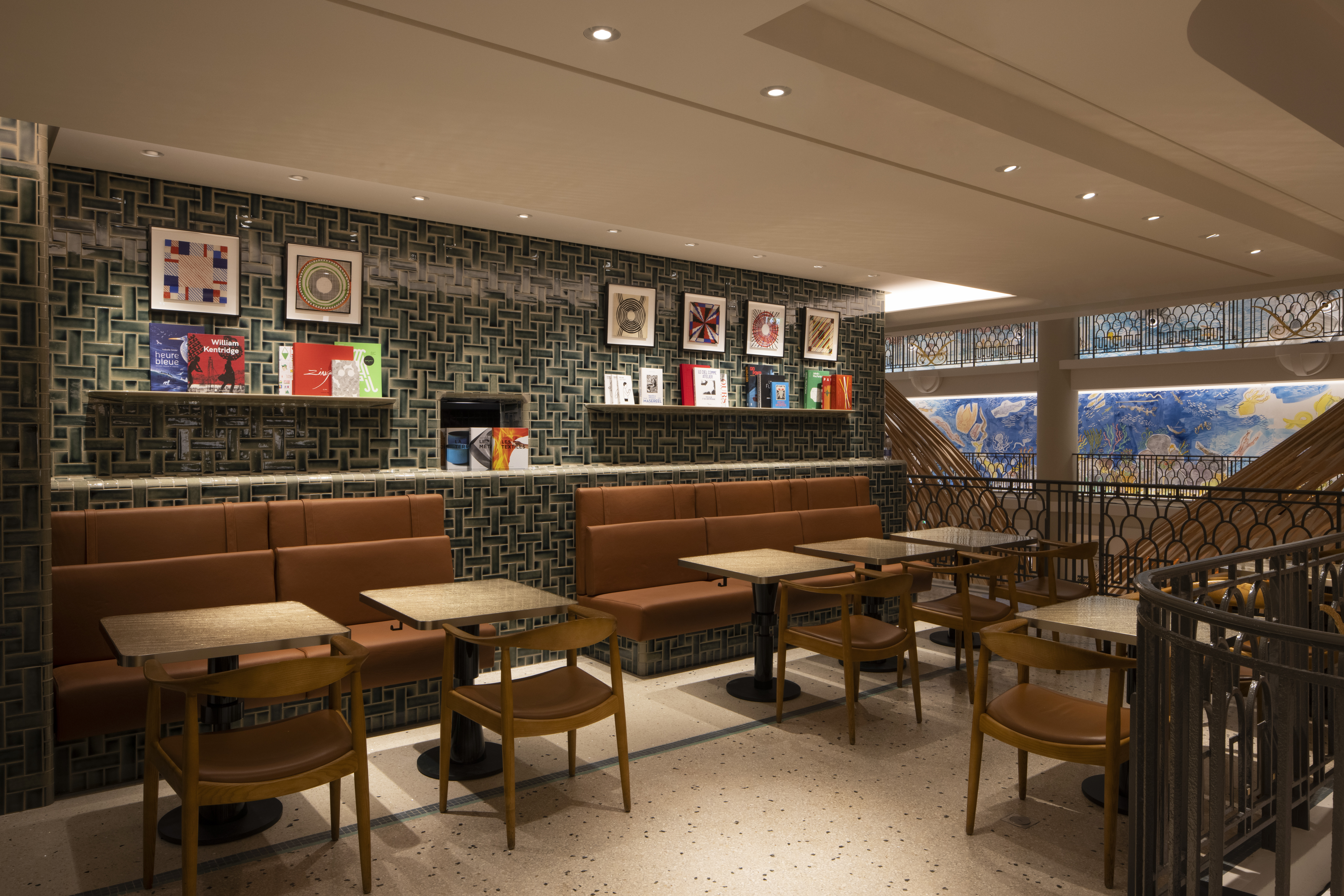 “We worked in subtle ways to create different atmospheres conducive to lingering. We’ve noticed over the years that Parisians come here sometimes just to hang out, which they don’t feel comfortable doing at the main flagship on Rue du Faubourg Saint-Honoré,” he told WWD.

“We wanted it to be cheerful: somewhere fun, pleasant, colorful, uninhibited and quite playful,” he added.

While footfall at the store — which marked the luxury house’s first big splash on the Left Bank after more than 170 years on the other shore of the French capital — sometimes rivals that of the Faubourg flagship, it tends to attract a younger clientele, Dubrule said.

The reopening on Friday will mark the third major Hermès store opening in a week, after the unveiling of a renovated boutique in the southern French city of Lyon last Thursday and its new unit in Tokyo’s Omotesando district on Saturday, noted Florian Craen, executive vice president of sales and distribution.

With 306 stores worldwide, Hermès opens or renovates an average of 30 boutiques a year. Considered a “must-see” location for tourists visiting Paris, the Sèvres store represents one of its most significant retail projects for 2021, he said.

“Against the backdrop of this digital acceleration that everyone is talking about, more than ever we need locations like this: stores that are meeting places, that deliver experiences; stores where you don’t just come for a product, but to spend time with the sales staff and with your friends,” Craen said.

A VIP lounge has been added on the first floor, overlooking the atrium with its 130-yard-long wall painting by French artist Matthieu Cossé. Special features include the back wall behind the watches and jewelry pod, which is textured to look like water ripples. “Nothing is too apparent, too flashy,” Montel said. 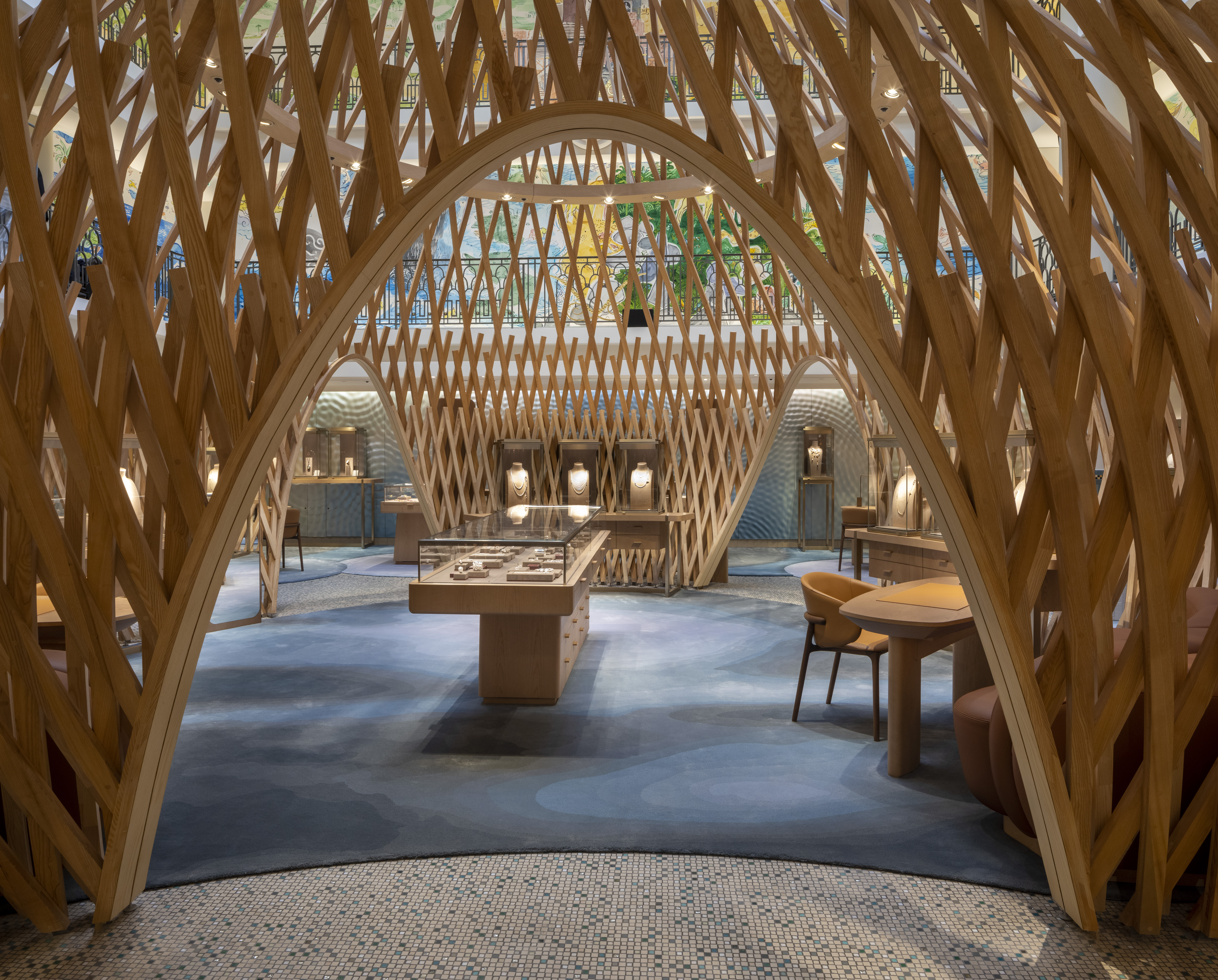 The basement also houses women’s and men’s rtw, shoes and leather goods, as well as home wares, saddles and baby gifts. The spaces are dotted with custom-woven rugs and softly rounded leather sofas in blue, green, caramel and cream tones, a palette reflected in the selection of handbags displayed in glass cases.

These include several exclusive designs created to celebrate the store reopening: Birkin, Bolide 1923 and Lindy bags in a range of aquatic shades.

Also on offer is a vintage silk scarf design by illustrator Kiraz and Hugo Grygkar, the creator of the first Hermès silk scarf, and a one-of-a-kind jukebox decorated with the 1970s-era “Quadrige au fil” design by Pierre Péron, rendered in indigo and sapphire blue leather marquetry.

In September, the store will open an adjacent dedicated space that will house Petit h, the sister line founded by Pascale Mussard in 2010 using upcycled luxury raw materials. The Sèvres store is the only location worldwide to permanently carry the Petit h line.