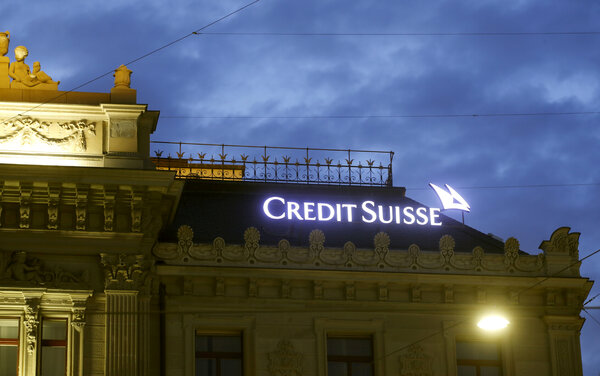 How one fund’s bad bets are roiling global markets

Credit Suisse and Nomura Holdings warned this morning that they faced huge losses from a multibillion-dollar fire sale of stocks held by just one investment firm, Archegos Capital Management. It’s the latest sign of the fragility of the global markets, and could spur more attention from regulators on the murky world of swaps and investor borrowing.

What we’ve learned so far: Archegos manages the personal fortune of the former hedge fund mogul Bill Hwang, who won Wall Street’s business despite having pleaded guilty to insider trading years ago. It amassed huge positions in media giants like ViacomCBS and in several Chinese tech companies — largely with borrowed money.

The Archegos strategy included using swaps, contracts that gave Mr. Hwang financial exposure to companies’ shares while hiding both his identity and how big his positions really were. (It is also becoming increasingly apparent that several Wall Street banks lent Archegos money without knowing that others were doing the same thing for the same trades.)

Trouble for Mr. Hwang, and his banks, arose when the prices of those stocks started to fall. That prompted some of his lenders to demand cash to cover his bets. When they began to question his ability to do so, some of them, including Goldman Sachs and Morgan Stanley, seized some of his holdings and kicked off the sale $20 billion worth in huge block trades.

That forced selling led to even bigger drops in the prices of those stocks, starting a vicious circle.

Credit Suisse and Nomura acknowledged being hit especially hard. Credit Suisse told investors that a “U.S.-based hedge fund” had defaulted on its margin calls, which could lead to losses that were “highly significant and material to our first-quarter results.” Nomura said that one of its U.S. arms could suffer “a significant loss” because of the forced sales. Shares in Credit Suisse were down 14 percent this morning; those in Nomura were down 16 percent.

Goldman, on the other hand, has told investors that its potential losses are “immaterial,” having covered its exposure.

Worries about a reckoning for the markets. Some bankers told The Financial Times that Archegos’s downfall highlighted the risk of one firm taking on so much leverage from multiple banks. (It also raises fresh questions about whether the mania for meme stocks, largely attributed to day traders, was actually fueled by hedge funds jumping into the trading.)

One person who is surely paying attention is Gary Gensler: President Biden’s pick to lead the S.E.C. has been an advocate for market transparency, having argued that unregulated dark pools could cause a broader risk to the U.S. economy.

The Suez Canal is close to being cleared. The 220,000-ton ship that has blocked the crucial maritime passageway was partially refloated this morning, aided by the tide. The canal authorities say they are hopeful that the vessel will be freed soon, avoiding further disruptions to global trade.

Final votes on a unionization drive at an Amazon warehouse in Alabama are due today. The monthlong battle over organizing nearly 6,000 workers — one of the biggest union elections in history — is coming to a head, though results won’t be known for several days.

President Biden plans to split his next spending bill in two. White House officials are expected to first introduce an infrastructure-focused bill that includes green-energy initiatives, The Wall Street Journal reports. In a few weeks, the administration will unveil a second proposal focused on child care and health care programs, backed by calls to raise taxes on corporations and the wealthy.

Don’t expect a quick end to tariffs on China, a top U.S. official says. The Biden administration will probably use the Trump-era levies as pressure for further concessions, Katherine Tai, the new American trade representative, said.

Vaccine passports are gaining momentum. The Biden administration is working with private companies to create a standard version that people can show to prove that they have been fully vaccinated, The Washington Post reports. New York State is rolling out one such app this week.

The Supreme Court will hear arguments today from Goldman Sachs and from pension funds over a claim that the Wall Street giant misled investors about its work selling complex debt investments in the prelude to the 2008 financial crisis. In its latest brief, Goldman makes an interesting argument: Investors shouldn’t rely on statements such as “honesty is at the heart of our business” or “our clients’ interests always come first” that appear in S.E.C. filings and annual reports.

The case is a test of shareholders’ ability to sue over claims of investment fraud. The pension funds have sought to sue as a class over Goldman’s statements, saying that they believed the claims of honesty. Goldman has argued in its latest brief that the investors are resorting to “guerrilla warfare” and aren’t providing “serious legal arguments.” The bank says that an investor victory would lead to a barrage of future lawsuits over “general and aspirational statements” of the kind made by “virtually every public company in America.”

The Biden administration isn’t taking sides but will say today that “meritorious private securities-fraud suits” are “an essential complement” to enforcing securities laws.

How a former S.E.C. commissioner thinks the court will respond to Goldman’s arguments: “I expect the court to be troubled by the claim that companies cannot be held accountable for saying that clients come first and then acting otherwise,” Robert Jackson Jr., who served on the commission from 2018 to 2020 and is now an N.Y.U. law professor, told DealBook. (The justices probably won’t agree with the claim that making a company “mean what it says” will lead to a tsunami of meritless lawsuits, he added.) Regardless, Goldman is right that the stakes are high, he said, since the case will probably decide whether shareholders can “hold corporate insiders accountable when they tell investors one thing and do another.”

A Passover Seder that blends trend and tradition

What made last night different from all others? A diverse group of comedians, celebrities and venture capitalists doesn’t normally gather for a virtual Passover Seder on a chat app. But that is what happened last night on Clubhouse, which hosted what was possibly the world’s first hunt for a nonfungible token version of afikomen, the broken matzo ritualistically hidden for children to find and claim a prize.

Like an NFT, an afikomen is a unique object. “It feels like a reasonable updating of tradition,” said fnnch, the San Francisco street artist who created images of broken matzo for the event. NFTs are digital assets that represent sole ownership of things that are otherwise easily replicated — in this case fnnch’s pictures. He predicted that NFTs would eventually include a technological lock preventing copies from displaying, which would make owning them much more like possessing a physical artwork.

Fnnch recently made headlines by depicting tech titans as honey bears, an image that was turned into an NFT and sold for the crypto equivalent of about $66,000.

One afikomen NFT is being auctioned off to support Value Culture, a nonprofit that sponsors art, education and spiritual projects to foster community engagement. The other was nestled within the profile of someone in the Clubhouse room and given away for free. (Hints about to how to find them lay in the Passover tale that is traditionally told at a Seder.)

Value Culture’s founder, Adam Swig, came up with the reimagined Passover ritual, which was produced by Randi Zuckerberg, sister of Mark Zuckerberg. Guests included the actress Tiffany Haddish, the comedian Tehran Von Ghasri and the Clubhouse investors Marc Andreessen and Ben Horowitz. More than 3,000 people were in the room at the height of the event, which lasted four hours instead of the scheduled two.

The annual college basketball championship — and betting bonanza — known as March Madness has been full of upsets, on both the men’s and women’s sides, blowing up many brackets.

If you no longer have hope of winning the office pool, here’s another contest to think about: March’s maddest markets. We’ve come up with a mini-tournament of seeded matchups to determine which mania is the most manic.

How would you bet? Let us know: [email protected]

Blank-check firms are the hottest thing going right now, peaking at just the right moment. But penny stocks have been here before and always bring their A game during a good market frenzy.

Tesla’s cars may run on batteries, but its stock is powered by Elon Musk’s tweets, and its market value has risen 500 percent over the past year. But the “Technoking” may be out-memed by the mall retailer GameStop, up 4,000 percent over the same period thanks to an army of emoji-loving supporters (which includes … Mr. Musk.)

No. 1 Bitcoin vs. No. 4 central bank digital currencies

The original cryptocurrency has stumbled of late, but it’s never wise to count it out. (Mr. Musk is a fan, too.) Its more buttoned-up counterpart, which is big in China but not so much in the U.S., has promised more than it has delivered.

Nonfungible tokens, which have conjured millions of dollars from screenshots, are a force to be reckoned with. But so is the digital token that started as a joke and is now worth well over $6 billion. (And, yes, Mr. Musk is a fan.)

The Swiss billionaire Hansjörg Wyss has teamed up with a Maryland hotel developer to bid for Tribune Publishing, challenging a takeover offer from Alden Global Capital. (NYT)

Robinhood and SoFi are planning to give some of their customers access to I.P.O.s before they start trading. (Bloomberg)

Senator Amy Klobuchar, Democrat of Minnesota, on her efforts to tighten antitrust enforcement of the tech industry: “It’s on us as a democracy to get a hold of what’s going on in the internet.” (Sway)

Fintech start-ups that are taking on Wall Street giants are having a moment. (NYT)

Amazon is reportedly hitting back hard against critics like Senators Bernie Sanders and Elizabeth Warren at the behest of Jeff Bezos. (Recode)

“On Google Podcasts, a Buffet of Hate” (NYT)

Leon Black plans to step down as chairman of MoMA, days after announcing he will give up the same position at Apollo Global Management. (NYT)