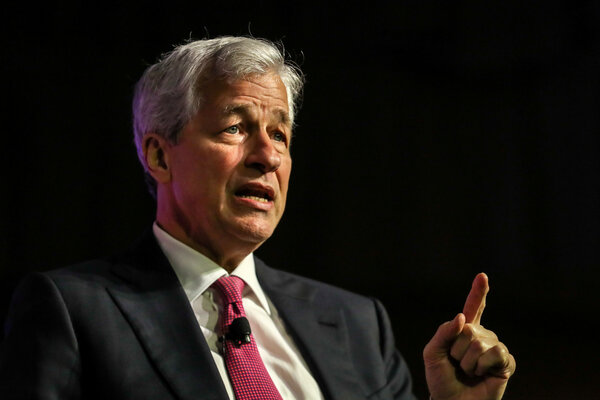 The annual letter to shareholders by JPMorgan Chase’s chief Jamie Dimon was just published. The widely read letter is not just an overview of the bank’s business but also covers Mr. Dimon’s thoughts on everything from leadership lessons to public policy prescriptions.

“The U.S. economy will likely boom.” A combination of excess savings, deficit spending, a potential infrastructure bill, vaccinations and “euphoria around the end of the pandemic,” Mr. Dimon wrote, may create a boom that “could easily run into 2023.” That could justify high equity valuations, but not the price of U.S. debt, given the “huge supply” soon to hit the market. There is a chance that a rise in inflation would be “more than temporary,” he wrote, forcing the Fed to raise interest rates aggressively. “Rapidly raising rates to offset an overheating economy is a typical cause of a recession,” he wrote, but he hopes for “the Goldilocks scenario” of fast growth, gently increasing inflation and a measured rise in interest rates.

“Banks are playing an increasingly smaller role in the financial system.” Mr. Dimon cited competition from an already large shadow banking system and fintech companies, as well as “Amazon, Apple, Facebook, Google and now Walmart.” He argued those nonbank competitors should be more strictly regulated; their growth has “partially been made possible” by avoiding banking rules, he wrote. And when it comes to tougher regulation of big banks, he wrote, “the cost to the economy of having fail-safe banks may not be worth it.”

“China’s leaders believe that America is in decline.” While the U.S. has faced tough times before, today “the Chinese see an America that is losing ground in technology, infrastructure and education — a nation torn and crippled by politics, as well as racial and income inequality — and a country unable to coordinate government policies (fiscal, monetary, industrial, regulatory) in any coherent way to accomplish national goals,” he wrote. “Unfortunately, recently, there is a lot of truth to this.”

“The solution is not as simple as walking away from fossil fuels.” Addressing climate change doesn’t mean “abandoning” companies that produce and use fossil fuels, Mr. Dimon wrote, but working with them to reduce their environmental impact. He sees “huge opportunity in sustainable and low-carbon technologies and businesses” and plans to evaluate clients’ progress according to reductions in carbon intensity — emissions per unit of output — which adjusts for factors like size.

Other notable news (and views) from the letter:

With more widespread remote working, JPMorgan may need only 60 seats for every 100 employees. “This will significantly reduce our need for real estate,” Mr. Dimon wrote.

JPMorgan spends more than $600 million a year on cybersecurity.

Mr. Dimon cited tax loopholes he thinks the U.S. could do without: carried interest, tax breaks for racing cars, private jets and horse racing, and a land conservation tax break for golf courses.

Some meta-analysis: This was Mr. Dimon’s longest letter yet, at 35,000 words over 66 pages. The steadily expanding letters — aside from a shorter edition last year, weeks after Mr. Dimon had emergency heart surgery — could be seen as a reflection of the range of issues top executives are now expected, or compelled, to address.

Toshiba considers a $20 billion takeover bid. The Japanese tech company said it had received a leveraged buyout offer from the private equity firm CVC Capital, sending its shares to a four-year high. Toshiba has had a series of scandals, and faces pressure from activist investors.

The company behind the Johnson & Johnson vaccine mix-up has a history of errors. Emergent BioSolutions, which the U.S. relied on to produce doses by J.&J. and AstraZeneca, had a made manufacturing errors before. Experts worry this may leave some Americans more wary of getting vaccinated, even as Mr. Biden has moved up the eligibility deadline for U.S. inoculations.

An electric aircraft maker sues a rival for intellectual property theft. Wisk, which is backed by Boeing and the Google founder Larry Page, said that former employees downloaded confidential information before joining Archer, a competitor. Archer, which is going public by merging with a SPAC run by Moelis & Company and which counts United Airlines as an investor, denied wrongdoing and said it was cooperating with a government investigation.

A blistering start for venture capital in 2021. Start-ups set a fund-raising quarterly record in the first three months of the year, raising more than $62 billion, according to the MoneyTree report from PwC and CB Insights. That’s more than twice the total a year earlier and represents nearly half of what start-ups raised in all of 2020.

Why is the Amazon union vote taking so long?

Voting in the union election at an Amazon warehouse in Bessemer, Ala., ended on March 29, and counting began the next day, but the outcome is still unknown. What’s going on? It’s less about the number of ballots than how they’re counted.

The stakes are high, for both Amazon and the labor movement. Progressive leaders like Bernie Sanders have argued a victory for the union, the first at an Amazon facility in the U.S., could inspire workers elsewhere to unionize. And Amazon is facing increased scrutiny for its market power and labor practices.

Only a tiny portion of Amazon’s work force was actually eligible to vote. About 5,800 workers mailed their ballots to the Birmingham office of the National Labor Relations Board. Counting each vote involves two envelopes: one giving the worker’s name and, inside that, another sealed envelope containing an anonymous ballot. Handling them has been a painstaking process:

In a private video conference, an N.L.R.B. staff member reads the names from the outer envelopes. Amazon and the union both have a chance to contest each worker’s eligibility.

Once Amazon and the union have gone back and forth over disputed voters, the N.L.R.B. counts the uncontested ballots anonymously and by hand, on a video conference open to reporters. This could start today.

Each side then has about a week to contest whether the vote was fair before the N.L.R.B. certifies it.

“Economic fortunes within countries and across countries are diverging dangerously.”

— Kristalina Georgieva, the managing director of the I.M.F., on how the uneven rollout of vaccines poses a threat to the global economic recovery.

After the 2008 financial crisis, Credit Suisse emerged battered by high-risk bets and promised to do better. A series of recent scandals suggests it hasn’t, The Times’s Jack Ewing writes.

A recap of the Swiss bank’s troubles over the past year or so:

A spying scandal that led to the ouster of Tidjane Thiam as C.E.O.

Ties to Greensill Capital, the SoftBank-backed lender that has filed for insolvency and will lead to losses at the Swiss bank.

Its involvement with Archegos, whose hugely leveraged stock bets went south, saddling the bank with a big hit.

It could have been worse. Rules requiring banks to hold more capital helped prevent the Archegos meltdown from posing a systemic threat. Still, Credit Suisse is paying dearly for it, replacing a half-dozen top executives, forgoing executive bonuses and halting stock buybacks. Its current chief, Thomas Gottstein, is facing closer scrutiny as well.

Credit Suisse’s troubles show that regulators must stay vigilant, critics say, as lenders chase profits in increasingly risky ways. The Swiss bank is “a straw in the wind that suggests there is a relaxation of risk management within banks because it is so difficult to make money on interest margins,” said Nicolas Véron of the Peterson Institute for International Economics.

Who’s behind that corporate veil?

The Treasury Department is introducing new rules on corporate transparency and it wants input. This week, it began a 30-day comment period on to-be-drafted regulations that would make it harder to obscure who controls a company. Among the details to be worked out are what entities should report and when; how to collect, protect and update information for a database; and the criteria for sharing with law enforcement.

“We could not be more excited,” Kenneth Blanco, the director of the Treasury’s Financial Criminal Enforcement Network (FinCEN), told bankers recently. The U.S. has been under pressure to address its vulnerability to money laundering and financial crimes:

In 2016, the international Financial Action Task Force gave the country a failing grade on transparency of company ownership.

In 2018, banks and financial institutions began having to collect that information from clients to help law enforcement identify individuals.

In January, Congress passed the Corporate Transparency Act, which requires businesses to report ownership to the government.

Flipkart, the Indian e-commerce company owned by Walmart, is reportedly planning to go public through an I.P.O. this year. (Bloomberg)

Grab, the Singaporean tech giant, is near a deal to merge with a SPAC backed by Altimeter Capital at a $35 billion valuation. It would be the biggest-ever blank check deal. (FT)

Fox sued the owner of FanDuel over the price of its option to buy a stake in the sports betting service. (CNBC)

State and local governments eased hundreds of regulations during the pandemic. Companies want some of those rules gone forever. (WSJ)

Coinbase, whose direct listing is set for next week, said it collected more revenue in the first quarter this year than in all of 2020. (CNBC)

The audio chat start-up Clubhouse is said to be raising funds at a $4 billion valuation. (Bloomberg)

The S.E.C. accused an actor of running a $690 million Ponzi scheme built around false claims of deals with Netflix and HBO. (Bloomberg)

Prosecutors in France have accused local Ikea managers of running an intricate “system of espionage.” (NYT)

Highlights from Forbes’s latest billionaires list: Beijing is now home to the most billionaires; and here are the richest SPAC barons and the newest members of the under-30 three-comma club. (Forbes)

What’s next for Coinbase?