On the day in September when he was hired as a cook at Fulton Market Kitchen — a restaurant in Chicago featuring shrimp and grits and miso-glazed halibut — Jeff Danaher asked the chef about his plans for the winter.

“He was like, ‘I’m open four days a week and I’m trying to go to seven,’” recalled Mr. Danaher, who had been out of work for months. “It was a huge relief.”

But five weeks later, indoor dining in the city came to a halt. Mr. Danaher, who made nearly $50,000 per year before the pandemic and had his pick of positions in recent years, was suddenly jobless again.

“After about the second or third week into Covid,” he said, “I got scared for my job security in a way that I never had before in 10 years of cooking.”

In sheer economic terms, few workers have stood more directly in the path of the pandemic than the roughly 10 million people employed by restaurants at the start of the year. The industry shed close to half those jobs in March and April, and was still down almost 1.5 million as of October.

The winter will likely bring another round of pain: In recent weeks, reservations have dropped substantially in cold-weather states like Illinois, New York and Pennsylvania, according to data from OpenTable.

The crisis has forced many of the industry’s working poor to choose between financial ruin and harrowing work conditions. But more so than many other professions, the pandemic has also devastated the industry’s middle class: the thousands of cooks, chefs and servers who can make between $35,000 and $85,000 per year in food hubs like Chicago.

In good times, new restaurants open weekly, and workers with sought-after skills or high-end experience often enjoy plenty of job options. But a wave of closures has hit pricier restaurants harder than fast food and other down-market establishments, which have an easier time shifting to takeout, and those workers have become increasingly desperate.

For Mr. Danaher, 29, the trouble started in early March, when he left his job as a sous-chef at a higher-end casual restaurant in Chicago over concerns about drug use and harassment among the wait staff.

He was optimistic about his prospects: During tours at nearly 20 restaurants, he had picked up a variety of in-demand skills, such as bread making, pickling and charcuterie (preparing meat items like sausages and pates). He could butcher a freshly killed pig.

This time around, he quickly lined up interviews, but the jobs seemed to fizzle as the pandemic approached. On a Thursday in mid-March, Mr. Danaher staged — restaurant-speak for an unpaid tryout — at a restaurant called Good Fortune. “It was supposed to be super-busy, but they had 10 covers on the books,” Mr. Danaher said, alluding to the sparse crowd.

Chris Tiba, Good Fortune’s sous-chef, said the position would have been Mr. Danaher’s if not for the looming industry apocalypse. “He did such a phenomenal job,” Mr. Tiba said. “He was super-focused, hungry for his craft.” (Good Fortune has gone out of business and Mr. Tiba is collecting unemployment.) 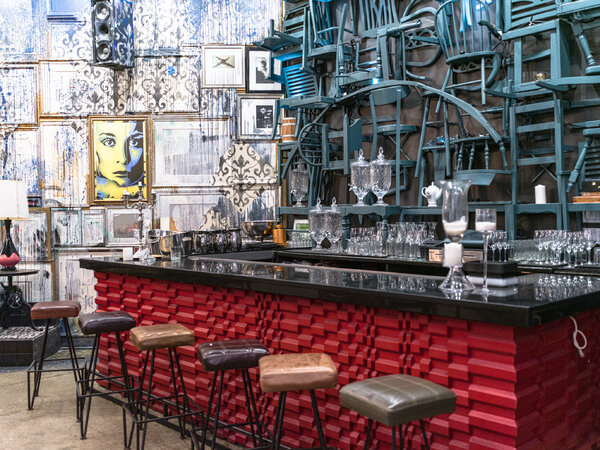 The state suspended on-site dining four days after his tryout. Mr. Danaher tried to file for unemployment, but the website was overloaded and the phone lines were jammed.

His girlfriend, Alessandra Llanes-Diaz, also an out-of-work cook at the time, moved in so they could quarantine together. They drew down their bank accounts buying ingredients for meat sauce, which they planned to freeze, and stews. “It was what we call staff meals,” said Ms. Llanes-Diaz. “A bunch of veggies and things in a pot.”

By mid-April, Mr. Danaher was inquiring at pizza joints and even a Dunkin’ Donuts, but got no takers. He scouted out grocery and retail stores. Toward the end of the month, he briefly took a contractor gig making syrups for a company that sold cocktail kits, but the work died down a few weeks later.

Around the same time, the industry was staggering back to life. In Chicago, the Michelin-starred Elske, known for its moderately priced tasting menu, began opening three days a week to offer takeout. “Our first meal was Swedish meatballs, mashed potatoes and cucumber salad,” said David Posey, the chef who co-owns Elske with his wife. “We thought we’d go through that in a week. It was enough for one day.”

In Nashville, Tony Galzin, the co-owner and chef at Nicky’s, revved up his coal-fired oven and sold housemade pizzas and fresh pasta to go. In Washington, Cork Wine Bar, an early fixture in the city’s booming 14th Street corridor, did a brisk business in Seder boxes.

Later, as dining restrictions eased and government aid flowed, many restaurants found they could come close to breaking even while paying workers fairly. Instead of resuming traditional table-side service, Mr. Galzin asked customers to order from a counter. Several former waiters took on other jobs, and Mr. Galzin distributed tips evenly to all staff members, who earned between $16 and $20 per hour, more than many had pre-pandemic.

Elske limited its menu and served customers on a patio as well as inside near the windows. Alison Miller, the restaurant’s former assistant general manager who became a server this summer, said she took home at least $1,000 most weeks.

Still, the restaurants could rehire only a small fraction of their workers. Nicky’s eventually brought back just over half of the 34 people it once employed; Elske brought back about half of its 16. Diane Gross, the co-owner of Cork, had to lay off nearly two-thirds of her pre-pandemic team of 30.

Data compiled by ZipRecruiter show that job postings at high-end restaurants like Morton’s and Ruth’s Chris dropped nearly 45 percent from March to May, versus only about 20 percent for the likes of McDonald’s and Burger King.

By July, the enhanced unemployment benefits, which Mr. Danaher only started receiving in May, were about to expire, and his finances were looking grim. He came down with Covid the following month, though his symptoms were mild.

Once he recovered, he occasionally made money cooking for private dinner parties, but it was at best a down payment on his rent. He needed a full-time position, but felt his experience was pricing him out of the market.

“The guy next to me,” Mr. Danaher said of one tryout, “he was green — he was wearing, like, Nikes and jeans.” (Pros generally consider nonslip shoes a must.)

In late September, Mr. Danaher finally landed the job at Fulton Market Kitchen. “It was a good chef; they make all their sauces and pasta in-house,” he said. He started at $16 per hour. But with infection rates soaring, Illinois ended indoor dining in Chicago before the end of October.

The restaurant closed and canceled a series of Andy Warhol-themed dinners it had planned for Halloween weekend. “I understand why we have to shutdown,” said Relu Stan, Fulton Market Kitchen’s co-owner. “What I don’t get is why it’s always such short notice.”

Mr. Stan laid off his staff rather than pivot to takeout, as he had initially done in the spring. “There’s no money in takeout and delivery,” he said. “Not for us. Our food doesn’t travel that well.”

Other restaurateurs, like Mr. Posey at Elske, were making similar calculations, pushing still more employees out of work. According to ZipRecruiter, job postings at many high-end restaurants fell in November.

Not long after, however, Mr. Danaher caught a break: A restaurant called Split-Rail asked if he could pick up two shifts per week. “He’s a BRILLIANT cook, one of the most employable people I’ve ever met,” the restaurant’s chef-owner, Zoe Schor, who had worked with Mr. Danaher years earlier, wrote in a text.

Concerned about safety, Ms. Schor had kept Split-Rail strictly takeout and delivery during the pandemic. Winter even seemed to bring a bit of hope: Her restaurant specializes in comfort food like fried chicken and matzo ball soup — the kind of food that sells well in cold weather.

Mr. Danaher, who just moved into a new apartment, has now been guaranteed four shifts per week through the end of the year. Beyond that, who can really say?

“I’m incredibly grateful,” he said. “It is enough, but it’s just enough.”