Hiring in the US slowed sharply in July as the country struggled to control the coronavirus pandemic.

Employers added 1.8 million jobs last month, down from a record 4.8 million in June.

The unemployment rate fell to 10.2%, continuing to improve from the high of 14.7% seen in April.

The figures reignited calls for Washington to approve further economic stimulus, though the slowdown was not as bad as many economists had feared.

“While this number exceeded our expectations, it still does not signal all is well,” said Kathy Bostjancic, chief US financial economist at Oxford Economics. “We’re far from a healed or good labour market.”

The job gains reported by the US Labor Department on Friday came from many of the sectors hit hardest by shutdowns, including restaurants, bars and retail outlets.

Economists have said this kind of hiring, happening as states around the country allow establishments to reopen, represents the “easy” part of a long recovery ahead.

“The initial bounce from widespread re-openings is now behind us. Further improvement will occur in fits and starts and depends on the course of the virus,” said Sarah House, senior economist at Wells Fargo.

Since February, the US has lost more than 12 million jobs and seen unemployment spike from a roughly 50-year-low of 3.5%.

In the three months to the end of June, the country’s economy suffered its sharpest quarterly contraction in more than 70 years of record-keeping, shrinking at an annual rate of 33% or nearly 10% year-on-year.

The 10.2% unemployment rate recorded in July is higher than the worst of the 2007-2009 financial crisis, when the jobless rate peaked at 10%.

We added 1.8 million jobs in July, but our jobs level remains in absolute crisis—we lost so many jobs in March and April that we are still 12.9 million jobs below where we were in February. 1/

Economists have said the hiring slowdown last month is a reminder of the risks facing the American economy, as health concerns put a dampener on consumer spending and temporary measures passed in March, including bans on evictions and a $600 emergency boost to unemployment benefits, expire.

“As it becomes clear that businesses will be contending with a pandemic economy for some months to come, job losses are shifting from temporary to permanent,” Ms House said. “That brings us to a more dangerous phase.” 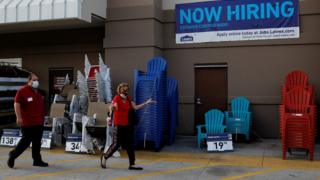 While Washington lawmakers have been trying to negotiate further stimulus, many Republicans oppose a deal of the size Democrats say is necessary.

“The talks are in worse condition than we would have liked to see but I think we have to give it a bit more time,” Ms Bostjancic said. “I believe the situation is so dire that both sides will have to compromise and something will get passed.”

Republicans want a deal to include legal protections for employers against virus-related health claims from workers.

They are also pushing to reduce the $600 emergency supplement to unemployment benefits, which expired last month, and have proposed far less aid to local governments than Democrats want.

“The most responsible thing we can do is to take proactive measures to allow people to return to work safely, instead of continuing to lock down the economy,” Republican Congressman Kevin Brady said after the jobs report.

The Republican has presented a challenge for US President Donald Trump, who had hoped to use a strong economy as his calling card to voters in his campaign for re-election in November. With politicians due to leave the US capitol for August recess, he has said he may act unilaterally to extend some aid.