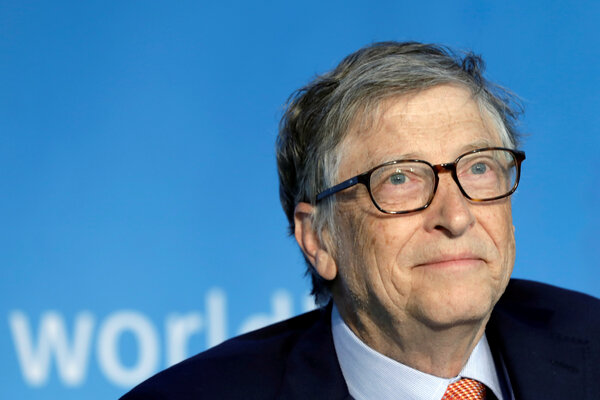 ‘It’s not a great climate thing’

Bitcoin is continuing to climb — its price is now above $54,000, giving it a market cap of more than $1 trillion — and draw more fans in corporate America. But skeptics are increasingly asking whether it’s worth the huge environmental cost, Andrew writes in his latest column.

“Bitcoin uses more electricity per transaction than any other method known to mankind,” Bill Gates told Andrew, adding, “It’s not a great climate thing.” Studies note that the annual carbon emissions from the electricity generated to mine and process the cryptocurrency equal the amount emitted by New Zealand or Argentina. (There are disagreements over how big the industry’s carbon footprint is, but no one disputes that it’s big.) And given the way Bitcoin works, the more popular it becomes, the larger its carbon footprint grows.

That is creating a tension within the business community:

Companies are increasingly adopting Bitcoin, whether by allowing customers to conduct transactions on their platforms using the cryptocurrency or by investing in it directly.

But companies and investors are also focusing more and more on climate change. And just as shareholders are pushing companies to reduce their carbon footprints and exposure to fossil-fuel companies, they might raise similar concerns about Bitcoin.

That conflict is readily apparent in BlackRock, which has started to “dabble” in Bitcoin investing, but has also become a leading advocate for companies reducing carbon emissions.

The pressure is on to make Bitcoin greener. Jack Dorsey, whose Square is a high-profile adopter, has pledged $10 million to invest in cleaner Bitcoin mining technologies. And companies like Seetee plan to focus on building Bitcoin mining operations using renewable energy.

Mr. Gates left open the door to having his mind changed. He told Andrew, “If it’s green electricity and it’s not crowding out other uses, eventually, you know, maybe that’s OK.”

The C.D.C. blesses unmasked gatherings (if you’re vaccinated). The agency said that inoculated people in America could meet in small groups without face masks or social distancing. In other reopening news: Millions of students in England returned to school yesterday, and New York City will reopen its 488 public schools on March 22.

A potential Biden banking regulator nominee is ruled out. Michael Barr, who had been seen as the likely pick to lead the Office of the Comptroller of Currency, is now out of the running, Bloomberg reports. He was opposed by progressives who see him as too moderate and are wary of his work for cryptocurrency companies.

Georgia’s state Senate approves voting restrictions. The Republican majority passed a bill repealing measures like no-excuse absentee voting, paving the way for the legislation to be approved by the House. We noted yesterday that there’s pressure on companies headquartered in Georgia to speak out against such moves. (More on that below)

A big audience for Oprah Winfrey’s interview with Prince Harry and Meghan. About 17 million people tuned into the two-hour broadcast on Sunday, double the size of viewership for a prime-time ratings winner in a given week. Britain’s tabloids remain riveted by the interview and its bombshell accusations.

The fall in stock markets yesterday told a tale of two kinds of businesses: the tech giants that have soared during the pandemic, only to fall in recent days, and the other kinds of companies that are poised to recover along with the broader economy.

The Nasdaq officially entered correction territory, having declined more than 10 percent from its Feb. 12 peak. Once-highflying stocks were among the worst performers, with Apple falling 4 percent and Tesla nearly 6 percent. (The electric carmaker is now down more than 20 percent for the year to date.)

That has also battered celebrated stock pickers like ARK Investment Management’s Cathie Wood, who has drawn a following on internet trading forums for her bets on so-called disruptive companies like … Apple and Tesla. Her flagship exchange-traded fund is down 31 percent since Feb. 16.

An accelerating economic revival is a big factor, market watchers say. As the $1.9 trillion stimulus bill nears approval by Congress, investors are betting on a return to pre-pandemic conditions, including consumer spending levels. That may mean higher inflation, pushing up bond yields and giving investors wider options than just tech stocks.

Then there’s the wild card: meme stocks. Shares in GameStop and other companies beloved by internet traders rallied yesterday, though your guess as to why is as good as ours. (Separately, GameStop said its board would form a committee to study strategies to take advantage of the run-up in its stock.)

The U.S. Chamber of Commerce, the nation’s biggest business trade group, has clarified its policy on giving to political action committees in the wake of the Jan. 6 riot at the Capitol — and it’s not as tough as the organization once suggested.

“We do not believe it is appropriate” to judge lawmakers “solely based on their votes on the electoral certification,” the group said last week, though the storming of the Capitol was prompted by congressional votes to certify the 2020 presidential election. The Chamber will instead consider other actions, like whether lawmakers promoted baseless voter fraud conspiracies, in deciding whether to support them.

The group had left the door open to something short of wholly disavowing some lawmakers. Its chief policy director, Neil Bradley, declared days after the insurrection that some lawmakers had “forfeited the U.S. Chamber of Commerce’s support. Period, full stop.” But he never called out specific politicians. He also said that the chamber would “consider the totality” of what elected officials subsequently said and did.

The Chamber is taking a stance that might cause blowback for member companies, which are more vulnerable to backlash than trade groups, with employees and brand reputation to consider. Some of its board members have urged tougher actions: Dow said it would suspend all PAC contributions “to any member of Congress who voted to object to the certification of the presidential election,” while IBM, which has no PAC, has called for broader policy changes. But the group’s position maintains relationships with congressional Republicans as it lobbies on key issues like corporate taxes. (The Chamber noted that it had held discussions with “over 100” of its members about its decision.)

UPS, which itself has suspended all giving to PACs, called the Chamber’s position thoughtful.

Debate over election issues as a business concern isn’t going away. Georgia lawmakers have approved voting restrictions that opponents say threaten democracy. Activists have called on the corporate community to speak out against the legislation, though some major players — including Delta, a Chamber board member — have not done so.

The dashing of an anti-Trump money machine

During the 2020 presidential election, the Lincoln Project, the political advocacy group founded by a group of disaffected Republican operatives, became a huge success. But its creators had their eyes on even more lucrative new projects — until scandal brought the venture’s future into question, The Times’s Danny Hakim, Maggie Astor and Jo Becker report.

The Lincoln Project moved to create a media arm last fall, having been courted by TV studios, book publishers and more. But tensions flared as its four main founders sought to reap the biggest share of such profits. The four had already collected big paydays, our colleagues report: About $27 million, or almost a third of the group’s total fund-raising, went to a consulting firm from which the four men were paid.

The group splintered after the emergence of accusations of sexual misconduct against a founder. Reports that John Weaver had harassed young men over the years eventually set off a battle for control of the Lincoln Project, with threats of lawsuits and the founding of rival organizations erupting. Two other founders, George Conway and Mike Murphy, have called to shut the group down.

A faction aligned with another founder, Steve Schmidt, plans to keep building out the Lincoln Project. But it’s unclear whether donor support will hold up amid the scandals and the receding of President Donald Trump from the national stage.

American Airlines plans to borrow $7.5 billion against its frequent-flier program to repay a federal rescue loan that it took out during the pandemic. (WSJ)

Frontier Airlines, the low-cost carrier, revived plans to go public via an I.P.O., after calling off a previous effort in 2017. (CNBC)

Domestic M.&A. in China surged to $77.5 billion this year, the busiest start on record, as the country’s economy recovers from the pandemic. (FT)

Watchdog groups called for an investigation into Representative Tom Malinowski, Democrat of New Jersey, over accusations that he failed to disclose at least $671,000 worth of stock trades. (Insider)

The Biden administration is reportedly close to picking the Big Tech critic Lina Khan as a nominee for the F.T.C. (Politico)

The C.E.O. of Zoom, Eric Yuan, transferred about 40 percent of his stake in the videoconferencing company to undisclosed recipients, raising questions about who now holds that voting power. (WSJ)

A California labor regulator fined Amazon and one of its contractors $6.4 million for stealing wages from delivery drivers. (Insider)

Oil giants are increasingly asserting that their future lies in putting carbon back into the ground, not extracting fossil fuels. (NYT)

An ode to … Microsoft Excel, which is potentially “the most influential software ever built.” (Not Boring)