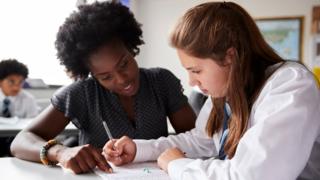 The vast majority of teachers (90%) say their pupils are doing less or much less work than they would normally at this time of the year, a study finds.

The report by the National Foundation for Educational Research (NFER) says head teachers believe around a third of pupils are not engaging with set work.

Limited or no access to technology was a problem for around a quarter (23%) of pupils, school leaders told the NFER.

The government says it has committed over £100m to help home learning.

The NFER report is based on findings from a survey of 1,233 school leaders and 1,821 teachers in England’s state schools, carried out between 7 and 17 May.

It raises particular concern about the impact of school closures, due to Covid 19, on the learning of pupils from the most disadvantaged areas, saying pupil engagement is lower in schools with the highest levels of deprivation.

Secondary schools with the highest number of children eligible for free school meals reported that 48% of pupils were engaged with learning activities, compared to 66% and 77% of pupils at schools in the middle and lowest brackets.

Teachers told researchers the following pupils were finding it particularly difficult to engage in remote learning, compared to their peers:

Teachers say just over half (55%) of their pupils’ parents are engaged with their children’s home learning, according to the report.

NFER chief executive Carole Willis said: “There are considerable differences in the levels of pupil engagement in remote learning, particularly amongst the most disadvantaged pupils.”

There is a risk that the attainment gap will widen as a result of the pandemic, she added, calling for a “comprehensive and long-term plan to address this issue”.

Josh Hillman, director of education at the Nuffield Foundation, which funded the research, said: “The shift to remote learning during lockdown has made the implications of children and young people’s unequal access to IT equipment and connectivity even more stark.”

Geoff Barton, general secretary of the heads’ union ASCL, backed a national plan “to help these children to catch up”.

“This analysis shows that children who already face the greatest challenges have suffered the worst impact to their learning during the lockdown, and that the digital divide is largely to blame.”

A Department for Education spokeswoman said: “We will do whatever we can to make sure no child, whatever their background, falls behind as a result of coronavirus.

“We are also considering, with a range of partner organisations, what more is required to support all pupils who have been affected by school closures.”

‘A generation losing out’

The NFER study comes as a research paper from University College London’s Institute of Education finds pupils across the UK are studying for an average of 2.5 hours a day during lockdown.

This figure is about half that indicated by a previous survey by the Institute for Fiscal Studies, suggesting that learning losses could be much greater than previously thought.

The UCL research, which examined data from a UK household longitudinal study covering 4,559 children, says one fifth of pupils (around two million children in the UK) did no schoolwork or less than an hour a day at home, while 17% put in more than four hours a day.

It finds that the variability in the amount of schoolwork being done at home is adding to existing regional and socioeconomic inequalities, with pupils in London, the South East of England and Northern Ireland receiving more offline schoolwork, such as assignments, worksheets and watching videos, than elsewhere in the UK.

In the South East, for example, 28% of children were receiving four or more pieces of offline schoolwork per day, compared with the countrywide average of 20%.

The report also says children eligible for free school meals “appear to be additionally disadvantaged during lockdown”, with 15% receiving four or more pieces of offline schoolwork compared to 21% of children not eligible for free meals.

Prof Francis Green, who led the research, said it “painted a gloomy picture of lost schooling and low amounts of schoolwork at home”.

“The closure of schools, and their only-partial re-opening, constitute a potential threat to the educational development of a generation of children.

“Everyone is losing out in this generation, some much more than others.

“Better home schoolwork provision, and better still an early safe return to school for as many as possible, should now become a top priority for government.”