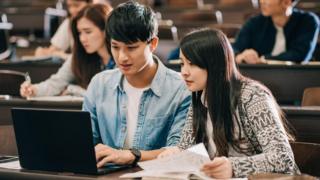 Many Chinese students are afraid to study in the UK because of fears over the high death toll from the Covid-19 pandemic, say researchers.

UK universities have been worried about the financial cost of Chinese students cancelling courses in the autumn.

But University of Manchester research suggests the barriers are not political tensions, fee levels or whether courses are taught online.

Instead there is “anxiety” over whether it is safe to travel to the UK.

Chinese students are the UK’s biggest contingent of overseas students, worth around £4bn per year in tuition fees and other spending such as accommodation.

UK universities fear major financial losses if the pandemic significantly cuts the numbers of Chinese students from the current 120,000 – with forecasts of cancellations ranging from 12% to 61%.

Nick Hillman, director of the Higher Education Policy Institute has warned against the “over-reliance on Chinese students”.

“They were alarmed by the UK death toll, among the highest in the world,” say the researchers from the University of Manchester.

While headlines have been about political tensions over Huawei and Hong Kong, parents in China were more concerned about the safety of their children from coronavirus.

The researchers spoke to companies and agents in China that recruit students for UK universities about why families might be hesitating.

“Most parents repeatedly expressed that safety in the UK was their first consideration now,” says the study.

“Social media in China reported that many people in the UK were not following social distancing guidance and did not wear face masks in public,” says the research.

Decisions by Chinese students about studying abroad are “almost always made as a family,” says researcher Miguel Antonio Lim.

“Parents are understandably concerned about their children’s safety,” says Dr Lim – and he says this is heightened even more by China’s one-child policy, when many students will be only children.

“For many it will be a once in lifetime opportunity to live and learn abroad – but they are torn by concerns over their safety and the quality of their learning experience,” says Dr Lim.

‘My plan has been ruined’

Henry Xia thought he would soon be travelling to the University of Manchester, but instead he is “still in a dilemma, deciding whether to go or not”.

He says studying in the UK “totally appealed to me”, but like other Chinese students he is worried about whether it is safe during the pandemic.

“I’m not sure if I will go to Britain, or make a different application,” says the student from Shenzhen. “I still have to discuss with my family.”

“My plan has been ruined,” he says, about his intention to take a degree in teaching English.

Henry fears that a second wave of the virus could push courses online, which would mean missing out on face-to-face teaching and the experience of “local culture”.

From China, he is carefully monitoring how the virus is being tackled, and says pictures of Boris Johnson wearing a mask are seen as a positive signal about the UK taking the virus seriously.

But his plans for the autumn still have no clear happy ending.

Many students are still making up their minds – and there have been wide-ranging forecasts about how many will not turn up.

The British Council, in a survey of students from East Asia in which Chinese students were the biggest number, said an “optimistic” scenario would be a 12% decline, costing UK universities £460m.

But a more pessimistic outcome, from these responses from May, would see 61% of students cancelling, at a cost of £2.3bn.

A study from London Economics suggested a 47% drop in new arrivals from China – which would mean 14,000 jobs lost to the UK economy, including 7,000 in universities.

This financial risk, say the economists, would be greatest in places with a high concentration of overseas students – in cities such as Sheffield.

“If there is a big downturn it would have a very serious impact on university finances,” she says.

But there are signs international students are becoming increasingly confident about coming to the UK, says Ms Stern.

Nick Hillman of Hepi says the financial reliance on Chinese students means “if they were to stop coming, then that would be worse than almost anything else for universities’ bottom lines”.

But the government has offered support to soften the blow for some universities.

The Department for Business, Energy and Industrial Strategy has promised “research intensive” universities loans and grants of up to 80% of the losses from a decline in international students.