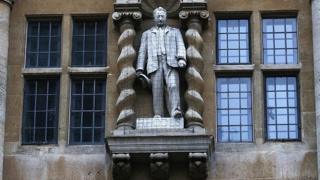 In the row over the statue of Cecil Rhodes, Oxford University’s head has warned against “hiding our history”.

Protesters want to pull down Oriel College’s statue of the 19th century imperialist, saying it is a symbol of racism and imperialism.

But vice-chancellor Louise Richardson said the views of the past had to be seen in the context of the time.

“We need to confront our past, we need to learn from it,” said Prof Richardson.

After the removal of the statue of slave trader Edward Colston in Bristol attention has switched to other statues, including that of Cecil Rhodes in Oxford, commemorating the Victorian imperialist, businessman and funder of scholarships.

The statue belongs to Oriel College, rather than the university, and Prof Richardson said she did not want to give a “binary” view on whether to remove it.

But she gave no indication of backing protesters wanting to take down the statue, instead warning against trying to hide the past and calling for a recognition that views from the past needed to be judged in their historical context.

Oxford’s MPs and a number of local councillors have supported calls to remove the Rhodes statue, arguing that it represented imperialist values that were no longer acceptable.

The Rhodes Must Fall campaign has called for a “public and permanent acknowledgement” of the university’s “role in colonial violence”.

“My own view on this is that hiding our history is not the route to enlightenment,” Prof Richardson told the BBC.

“We need to understand this history and understand the context in which it was made and why it was that people believed then as they did,” she said.

“This university has been around for 900 years. For 800 of those years the people who ran the university didn’t think women were worthy of an education. Should we denounce those people?

“Personally, no – I think they were wrong, but they have to be judged by the context of their time,” said Prof Richardson.

In the era of Cecil Rhodes, support for imperialism had been the prevailing view, she said.

The vice-chancellor said that growing up in Ireland she had seen Oliver Cromwell as a “barbarous” figure – but she had seen his statue in Westminster and had learned more about him.

“Cromwell to me was like Voldemort is to my children,” she said, referencing the evil wizard in the Harry Potter novels.

“But I went about learning more about how he was perceived very differently in Britain.”

When looking at the attitudes and actions of the past, she asked: “Do we use the ethics of today or do we use the morals and ethics of the time in which they lived?”

After a row about the statue a few years ago, there had been proposals for a plaque to be added to the Rhodes statue adding “context” about his life, and Prof Richardson said she regretted that this did not seem to have happened.

But she said the focus of the university was not on statues from the past, but on the experience of students in the present, adding that the number of black and ethnic minority students had risen.

“I would hate to think that any black student or student of any background would think that Oxford would be an unwelcoming place.”

Prof Richardson was speaking as the university was about it announce its first new college for 30 years.

Reuben College is to open next year as a postgraduate college and the vice-chancellor said it will be “more problem-focused, more entrepreneurial”.

The college will focus on climate change, artificial intelligence and cellular life. It takes it name from the Reuben family whose foundation has donated £80m to support it.

“The idea is to find solutions to global problems that transcend national borders,” said Prof Richardson, adding that the college would have a more “egalitarian” approach than the “traditional formal set-up”.

Oxford University has been at forefront of efforts to develop a vaccine for Covid-19 and she said it showed the necessity of “funding the research infrastructure”.

“It shows how important it is for a country like Britain to have as many first-rate research universities as possible. We’re critical to the economic recovery,” said Prof Richardson.