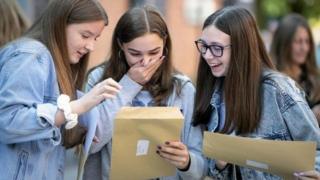 Head teachers in England have hit out at the government for failing to draw up contingency plans for exams in case schools are disrupted beyond September.

The Association of School and College Leaders says ministers need to do more than “tinker at the edges” if next year’s exams are to be fair to pupils.

Exams regulator Ofqual has proposed delaying next year’s GCSE and A-level exams from May to early June.

But heads have raised concerns of further lockdowns in the winter months.

In its response to Ofqual’s consultation on exams in 202l, ASCL called for “radical changes” to make them fairer to students.

Leader of the head teachers’ union, Geoff Barton, said it was “bordering on reckless” not to draw up contingency plans in case large numbers of students are unable to take exams next summer.

“It isn’t going to be business as normal next academic year,” he said, adding that not only would students have missed a huge amount of time, they are likely to have to “intermittently self-isolate” and face further lockdowns during the next academic year.

This will make the situation “even more challenging,” he said.

“It simply isn’t going to be possible for all students to cover all the content in GCSEs and A-levels to the depth required.

“Most worrying of all, is the complete absence of a contingency plan in the event that large numbers of students are unable to take exams next summer.”

He added: “It is bordering on reckless to have no Plan B when we have literally experienced at first-hand an actual national lockdown.

“The government and Ofqual really do need to think again about the planning for next summer’s exams, hoping for the best, but preparing for the worst.”

ASCL called on Ofqual to consider:

Both the Prime Minister and the Education Secretary Gavin Williamson have said all pupils will return full-time in September.

They will be required to keep groups of pupils separate as they are now, while schools are open to a limited degree.

But the so-called “bubbles” of pupils will be much larger, and in secondary school would include entire year groups featuring hundreds of pupils.

The aim is to reduce the need for social distancing within these groups which takes up more classroom space, meaning limited number of pupils could be accommodated at any one time.

But the larger groups introduces the possibility of larger groups of pupils being sent home in the event of confirmed or suspected cases.