My friend Norma Pitfield, who has died aged 89 of Covid-19, was an artist and academic who taught art and design for 27 years and was a lifelong socialist, peace and anti-nuclear activist.

Born in Bolton, Lancashire, Norma was the only child of Stanley Pitfield, who ran a radio repair shop, and Marjorie (nee Bailey), a tailor. A strong influence on her were her uncle and aunt, the composer (and pacifist) Thomas Pitfield, also an artist and writer, and his Russian wife, Alice, a gifted pianist, who lived nearby.

She attended Canon Slade school in the city and then studied fine art at Durham University. After graduating, she trained as a teacher at the Institute of Education (now part of University College London). She taught art and design for 27 years, first at schools in London, and then at Thomas Huxley college of education. There she met Susan Hemmings and they lived together as partners in Muswell Hill, north London.

In 1973 Norma became head of art at Trent Park Teacher Training College (now Middlesex University) when it was given degree-awarding powers. Batsford published her book on drawing in 1981. 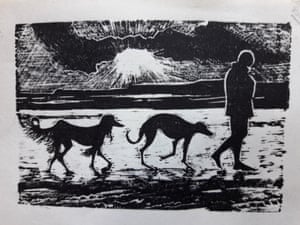 Norma had a son, Francis, in 1955, and became a single mother. He grew up with Norma’s parents until he was 16, when he came to live with Susan and her daughter, Ella. Later Norma’s parents moved in, too. They all lived together as a family for 12 years.

In 1983 Norma retired early from academia to Leiston, Suffolk. Her art work was shown at several mixed exhibitions and one-woman shows in London. She worked in pencil, ink, watercolour, oils, pastels, etchings, engravings and latterly as a member of the Sudbourne Printmakers. She was almost blind in her right eye for most of her life – she never let anything stop her doing what she really wanted.

Norma lived alone in Leiston for 35 years, where her talent for enduring friendships, evident since the age of four, continued to serve her well. There she forged a firm friendship with Lee Chadwick, the first communist elected to Suffolk county council.

They worked together in the Coastal League Against the Missiles (CLAM), on endless campaigns against nuclear power stations at nearby Sizewell and in environmental groups, including a campaign to protect the Suffolk Sandlings lowland heath against development.

Norma helped start a local women’s group, and with a friend, the poet Michael Laskey, a writing group that’s still going strong over 30 years later. She joined the Aldeburgh Music Club choir and supported hundreds of concerts at Snape Maltings.

Norma had been suffering from dementia and moved to a care home in Aldeburgh two years ago.

Francis died 2015. She is survived by her grandson, Matthew, and step-daughter, Ella.