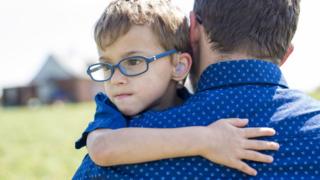 Families of children with special educational needs have felt “utterly abandoned” during school closures, an MPs’ committee has been told.

Witnesses told the education committee those with extra educational, physical or emotional needs had seen support “fall off a cliff” amid lockdown.

Risk assessments linked to Covid-19 had been used by some schools to prevent SEND pupils attending, it heard.

There was also concern national catch-up plans do not mention SEND children.

Witnesses from the special educational needs and disability (SEND) world painted a bleak and disturbing picture of life for pupils with additional needs.

Ali Fiddy, chief executive of the Independent Provider of Special Education Advice, said her organisation was seeing families “who are very clearly struggling”.

There was definitely not enough support being offered for parents, she said, with many families feeling “utterly abandoned”.

Children with special needs plans were part of the group of children who were invited to continue schooling.

But Ms Fiddy said, in some cases, the risk assessment process tied to the coronavirus outbreak was being used as an excuse to offer no services and keep pupils out of school.

She gave the example of a parent of a Reception child with SEND being told they could not attend because they would need to be reminded to wash their hands.

Children and young people are not vulnerable by virtue of having SEND, they are vulnerable because of the way the system treats them, Ms Fiddy said.

Amanda Batten, chair of the Disabled Children’s Partnership, said families feel “very much forgotten” and that most families had seen their support reduced if not withdrawn.

She said overall the picture was one of exhaustion and stress among the families she had heard from, with children’s physical and mental health deteriorating.

Families were left to fend for themselves as they struggled with home schooling, nursing in some cases and no therapeutic support at all, she said.

Philippa Stobbs, policy vice-chair at the Special Educational Consortium, said many families and young people had been hit hard by the waiving of the legal duty on schools to provide support for SEND pupils.

This was replaced when schools closed with the requirement for schools and councils to make “reasonable endeavours” with children on education health care plans.

The problem was that many families had received no information about what might replace their regular support.

“The impact of that is absolutely devastating,” she said.

“So the pre-existing inequalities have been exacerbated because so little has been done in some places for children who already experience difficulties in their education.”

“The difficulty for a family left to home educate their child with a lack of any provision from a school or local authority is almost unimaginable, and the impact of that is going to be deep and long-lasting.”

She also highlighted the structural issues within the SEND system which has form many years been be-set with delays and difficulties.

All witnesses agreed there was a need for a specific catch-up plans for children with special educational needs, involving extra emotional and therapeutic support.

And there was a warning of a spike in school refusal and exclusions if substantial support was not offered and manifestations of emotional needs were treated as disciplinary matters.

Chair of the committee, Robert Halfon, said: “This is very, very depressing what you’re telling us this morning, I have to say.

“I’m glad we have you here, but it is incredibly depressing, what we’re hearing.”