The story of how 53 Welsh Italians lost their lives when the ship Arandora Star sank 80 years ago as it transported them to second world war internment camps is to be told via a back-to-basics, coronavirus-friendly medium.

Rather than staging its usual conventional theatre production for thousands of Welsh schoolchildren, the renowned south Wales valleys company Theatr na nÓg has decided instead to produce a radio play.

Entitled simply Arandora Star, the play will be streamed – in Welsh and English – into classrooms in the autumn. The move has been praised by arts industry leaders as an example of innovation in challenging times.

The theatre company’s artistic director and co-writer of the play, Geinor Styles, said: “We are hugely disappointed that for the first time in three decades we will not be able to provide our usual production, but the safety of the children, our actors and creative teams is paramount.

“We believe that producing a radio version of the play is a great solution in these uncertain times. It will ensure that the arts and theatre continue to thrive and the children of Wales are not losing out on the creative industries playing an important role in their schooling.”

The company’s productions are seen every year by about 5,000 children between the ages of eight and 11. “I’m very happy that the tradition will continue and they will not lose out because of Covid-19,” said Styles.

The Arandora Star, a converted cruise ship, was sunk en route to Canada in the Atlantic by a German torpedo on 2 July 1940, with the loss of more than 800 lives. Among those on board were Welsh Italians, many from the valleys of south Wales who had been declared “enemy aliens” by the British government.

The play tells the story of a fictional character called Lina as she struggles to cope with the loss of her father, Guido, on the vessel and how she and her mother, Carmela, survive in a time of war and prejudice. 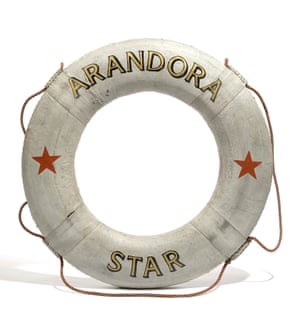 “It’s a relevant story for now about how we deal with immigration,” said Styles. She also said teachers were pleased that as well as reminding the UK of a tragic, sometimes forgotten episode, the style of the piece may help bring back listening skills.

The director, Dan Lloyd, said telling stories about episodes like the internment of Welsh Italians was vital. He said: “Although Arandora Star is a story set eight decades ago, there is much to be learned from history. Telling such stories ignites empathy, which is the key to helping things improve.”

It is appropriate that one of the most famous examples of the radio play is a Welsh one – Dylan Thomas’ Under Milk Wood, which was revived during lockdown by a cast of household names and key workers.

Fiona Allan, president of UK Theatre, praised the move by Theatr na nÓg. She said: “I’m encouraged to see companies finding innovative ways of getting culture into the classroom whilst theatres around the nation remain closed. It’s vitally important that our young future audience experience theatre and the arts at a young age.

“We’re all acutely aware of the risk Covid-19 poses to our industry, with theatres and arts companies throughout the UK at risk of collapse, and desperately in need of more than the government’s roadmap. We need dates to work towards in order to plan properly towards reopening the sector.

“In the meantime, Theatr na nÓg are demonstrating great resilience and forward thinking in bring this production to schools throughout Wales.”