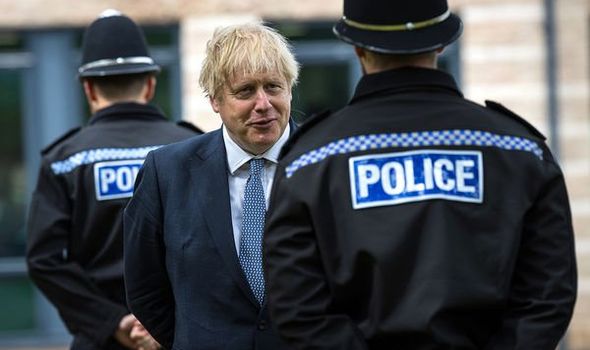 Boris Johnson will insist that every incident, victim and neighbourhood matters under his “unstinting” efforts to protect the public.

He is launching the Beating Crime plan after being released from a week of Covid quarantine at Chequers.

The PM said last night: “When I first stood on the steps of Downing Street as Prime Minister, I promised to back the police and make people safer.

“Because we cannot level up the country when crime hits the poorest hardest and draws the most vulnerable into violence.

“That is why my Government has remained unstinting in its efforts to protect the public and this plan delivers a fresh commitment, as we emerge from the pandemic, to have less crime, fewer victims and a safer society.”

Mr Johnson believes tackling crime is key to his plan to level up the nation.

He wants offenders to clean up streets, alleys, estates and open spaces to assure the public they are being held to account.

The Prime Minister said crime destroys lives, ruins neighbourhoods and does great economic damage. He added: “None of us can fulfil potential if we live in fear, none of us can rise up if we’re held down by those who would do us harm.

“If we are to truly flourish, we have to start by beating crime.”

The strategy gives neighbourhoods in England and Wales a named police officer to contact, who knows the area.

League tables will show 101 and 999 call answering times to show how responsive local forces are.

But the Police Federation attacked the strategy and criticised the Government’s pay freeze for officers.

Chairman John Apter is delivering a letter to No 10 today that says: “We don’t need old ideas presented as new, we need genuine investment for the whole of the criminal justice system and genuine consultation over new ideas.

“Without that, this is just another ill-thought out initiative.

We cannot level up the country when crime hits the poorest hardest and draws the most vulnerable into violence.

“Police officers are sick of gimmicks. Sick of underfunding. Sick of mixed messaging putting police at risk. Sick of Government contempt for police. It’s time for a total reset of police-Government relations.”

Mr Johnson is ordering crime and justice services to focus on early intervention.

The plan brings together a raft of measures to stop criminals in their tracks. Electronic monitoring is being expanded so burglars and thieves are tracked 24 hours a day when they are released from prison.

Conditions on stop and search powers are being relaxed to allow police to take more knives off the streets, while tags that detect alcohol in an offender’s sweat are being trialled on prison leavers in Wales.

Other reforms include investing more in mental health support in serious violence hotspots to stop young people being dragged into a life of crime.

More CCTV, street lighting and targeted patrols will be introduced under the Safer Streets Fund.

The Government will also invest more in tackling drug and alcohol addictions, which are major drivers of burglaries and violent crime.

An extra £31million is being spent on projects that allow the police to target gang leaders driving the drugs trade and on helping people to kick addiction.

Police will increase drug testing on arrest to crack down on recreational use.

Home Secretary Priti Patel said: “We’re putting 20,000 new police officers on the street, equipping them with new powers to catch criminals and take away knives, and shutting down drug gangs who exploit children and the vulnerable to make money.”