Conditions at shelters housing unaccompanied minors apprehended at the border have improved since early spring but are still drawing harsh criticism. 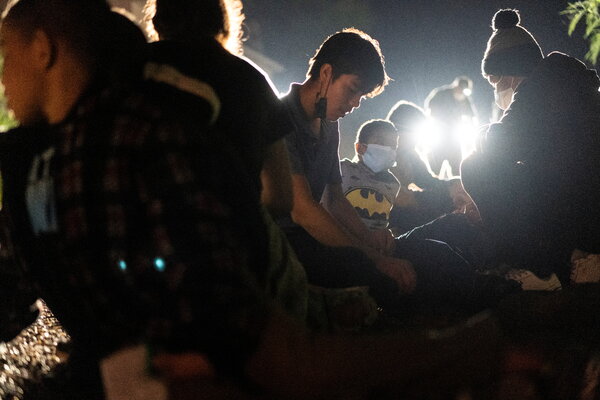 At an emergency shelter in the Texas desert, migrant teenagers are housed in long, wide trailers, with little space for recreation and not much to do during the hot summer days, according to lawyers and other advocates for the children who have visited them there.

Some of the children say they can wait more than a month before meeting with someone who can help connect them with a family member or other sponsor inside the United States. Some report episodes of food poisoning and say they have to wash their clothes in a bathroom sink.

In one case, two siblings at the shelter, a former camp for oil workers in Pecos, Texas, were given different case managers by the government. One sibling was reunited with their mother. The other was left behind in the shelter and remains there, according to a lawyer who has visited the shelter.

The living conditions for migrant children who arrive unaccompanied in the United States and are taken into custody appear to have improved since the early spring, when images of them crammed into Customs and Border Protection facilities drew criticism from around the world.

But accounts from people who are able to visit the emergency shelters — where the children are sent while awaiting the chance to be released to family members, friends or better-equipped state-run facilities — suggest that the Biden administration and the private contractors hired to run the facilities are still struggling to provide consistently good care for the children.

The Pecos shelter, which houses about 800 teenagers, is one of four remaining of the more than a dozen the Biden administration set up this spring to address the extraordinary number of migrant children arriving alone at the border with Mexico.

The Department of Health and Human Services, which oversees the shelters, just extended the Pecos contract to keep the facility open at least through November, and is considering plans to start housing younger children there as well, according to federal contract data.

The department’s internal watchdog opened an investigation this week into reports of substandard conditions and care at another of the remaining emergency facilities, the large shelter at the Fort Bliss military base in El Paso. More than half of the thousands of migrant children currently in emergency shelters are held at Pecos and Fort Bliss, according to internal data obtained by The New York Times.

The department did not respond to questions about the Pecos shelter. Xavier Becerra, the health and human services secretary, visited the Fort Bliss shelter at the end of June and said conditions had improved.

The government largely bars outside scrutiny of the emergency shelters, citing the pandemic and the privacy of the children, many of whom fled violence and poverty in their own countries to come to the United States. But some lawyers and others who work to help the children get access to the facilities, and their descriptions of the conditions help to flesh out what life is like there.