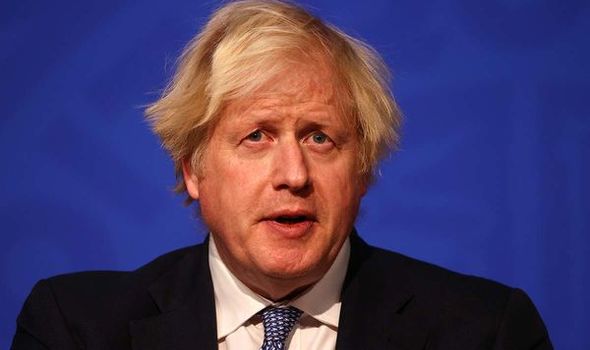 A loss in a crucial by-election on Thursday would be “very bad news” for the PM, with one well placed Tory source warning it could leave him facing a no-confidence vote. His MPs were further rattled last night after modellers predicted the new Omicron strain could see 75,000 people die in England alone if tougher restrictions weren’t imposed.

The dire predictions from The London School of Hygiene & Tropical Medicine used experimental data on how Omicron might spread.

Even under their most optimistic scenario of low immune escape from vaccines and high effectiveness of booster jabs, they predicted a wave of infection which could lead to a peak of more than 2,000 daily hospital admissions and 24,700 deaths by the end of April.

The most pessimistic scenario estimated 74,800 deaths.

The researchers, who also sit on the Spi-M Sage subgroup that advises No 10, said restrictions such as bans on indoor socialising at pubs and restaurants may be needed to stop the NHS becoming overwhelmed.

But the study was criticised for being rushed out and based on flawed assumptions. It was also accused of being used “to railroad politicians into acting when they should be calm and collected.”

The paper, which has not been peer reviewed, suggested restrictions would be needed to avoid a wave larger than January’s.

Study co-lead author Dr Rosanna Barnard said more will be known about Omicron in the next few weeks but said: “Mask-wearing, social distancing and booster jabs are vital, but may not be enough.

”Nobody wants to endure another lockdown but last-resort measures may be required to protect health services if Omicron has a significant level of immune escape or otherwise increased transmissibility compared to Delta.”

But critics pointed out that preliminary data from South Africa suggested the strain could be resulting in fewer hospitalisations.

Craig Mackinlay, the Conservative MP for South Thanet, said: “‘As ever, groupthink experts push for more restrictions on the back of lurid predictions.

“We are already seeing serious damage to the hospitality sector as fear again is made to stalk the country.

“We still lack firm evidence as to the virulence of the omicron variant, the effectiveness of current vaccines and what this means to NHS winter pressures.

Sir Graham Brady MP, chair of the 1922 Committee of Tory backbenchers, said endless cycles of restrictions could not be the solution.

He said: “Covid will be with us for many years, and new variants from time to time.

“It is unsustainable to continue dealing with an endemic virus with a constant cycle of lockdown and restrictions.

“Instead we should be ensuring people have the best advice and medical support and trust people to make decisions to live their lives.

“It’s now time we took a different approach to new variants. We cannot repeat the same damaging responses that we have had over the last two years.”

Scientists also questioned how reliable the modelling was.

Professor Carl Heneghan, of Oxford university’s Centre for Evidence Based Medicine, said: “This paper has been rushed out.

“It has not been peer reviewed and the hasty press release is designed to railroad politicians into acting when they need to be calm and collected in their decision-making.

“How can we still be following modelling advice which has consistently shown to be wrong?

“We have to ask ourselves who is running the country?”

Manchester university’s professor Thomas House, who himself sits on the governments spi-M committee of modellers, said it was important to treat the predictions with caution.

He said: “It is possible that some of the restrictions help us change the shape of the curve but to say that we just need to go early and hard and solve it is wrong, and I wish we could have a discussion about that.

“Pandemics don’t just go away and we need to balance the harms. It is a wicked problem.

“Stating there may be 75,000 deaths by May is hugely uncertain.”

Professor Paul Hunter, of the University of East Anglia, said: “Any model is only as good as its assumptions and one key assumption in this model is that severity of disease outcomes for omicron is the same as for Delta in unvaccinated people.

“Although we will not know for certain for a few weeks indications from South Africa do suggest that omicron does cause less severe disease than delta, though this is likely to be due to partial immunity.”

Prof Hunter continued: “I do not think the epidemic will continue to grow at its current rate for long and it should start to slow over the next couple of weeks

“I suspect the numbers will not be as bad as this modelling suggests and my inclination is not to impose any restrictions yet. The omicron is so infectious that it is could continue to spread even under more stringent control measures.

“I would wait and see if hospitalisations start to accelerate before deciding whether to impose more restrictions.”

Anthony Brookes, a Professor of genetics and health data science at University of Leicester, suggested that without vital data about Omicron the models could not be relied upon.

He said: “These models have proven time and time again to be inaccurate and overly pessimistic, and they are yet again being used to make fearful predictions with key parameters missing.”

Professor Sunetra Gupta, an expert in Infectious disease at Oxford University, said: “These models are based on the same assumptions as previous models which have not held up well in assessing the relative contributions of herd immunity vs non-pharmaceutical interventions (restrictions) in dictating the dynamics of infection and disease.

“Many epidemiologists don’t understand that loss of immunity against infection doesn’t mean that we cannot maintain the level of herd immunity required to minimise risk to the vulnerable population.

“It is very clear from what the models did in the summer that they have fundamentally flawed assumptions.

“They said if we opened up there would be tens of thousands of deaths but we opened in July and this did not happen.”

However,  Eleanor Riley, a professor of immunology and infectious disease, said Omicron is spreading so fast that people are “very likely” to meet someone infected with the Covid-19 variant unless they are “living the life of a hermit”.

The University of Edinburgh academic also warned “a lot of people” could still end up in hospital even if the coronavirus mutation proves to provoke milder symptoms than the Delta variant.

There are currently about 730 deaths per week and about 680 hospital admissions per day.

The Government said it believed its current measures “remained proportionate”.

But on Friday, minister Michael Gove said the UK faces a “deeply concerning situation” because of Omicron.

“We absolutely need to keep everything under review”, said the Communities Secretary, after chairing a Cobra meeting.