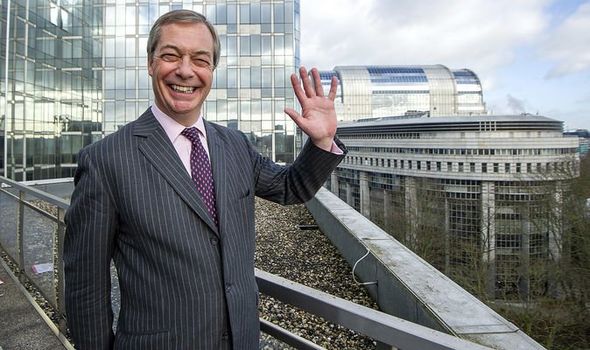 Mr Farage admits he now faces “big decisions” after his “personal armistice” at the end of his 30-year war with Brussels. He also praises the Daily Express for having the “courage” to be the first national newspaper to campaign for the country to leave the EU. And he insists today’s first full day of freedom from Brussels was won by Ukip supporters.

However, Mr Farage spoke of his misgivings about the 1,200-page treaty that came into force at 11pm last night.

“Today is a giant leap forward for our country, a very important historical day.

“But unfortunately, as with all victories, we have to remember there are some casualties as well,” he said.

He fears the deal on fishing quotas will give the EU powers to impose tariffs in response to any restrictions on access to UK waters after a five-and-a-half-year transition to a new system.

“Despite everything the Prime Minister has said, we may be an independent state with our own coastal waters but we have not taken back control of the fish within it,” he said.

“With this agreement we are locked into a system that significantly disadvantages our industry even if we get a slightly bigger quota share. That is not what those boats came up the River Thames for the week before the referendum. The upset and anger out in the fishing communities is huge.”

Mr Farage, who was pictured yesterday at the White Cliffs of Dover, also feared allowing some EU customs checks at Northern Ireland ports “has driven a wedge” with the rest of the UK.

Despite his concerns, he recognised the deal delivered a break with the Europe that would have been beyond his “wildest dreams” when he became active in Eurosceptic politics in 1990.

“On the upside, this is not an EU treaty. Theresa May’s original deal was an EU treaty, this is now outside this. And we are becoming an independent state that can make our own decisions on many things.

“Already we’re seeing with trade deals how easy it is to sign up all over the world.

“No peace is perfect but it is a very important moment.”

Because of coronavirus, Mr Farage planned to celebrate the end of the Brexit transition quietly at his home in Kent last night by “opening a bottle of something” at 11pm.

Mr Farage recalled joining the UK Independence Party after the failed Tory rebellion against the Maastricht Treaty, which founded the modern EU in 1993.

“The reason we formed Ukip is that despite all the criticism of it turning into a European union there was no voice in British politics for us to leave. There are still battles ahead but it does mark the end of the war. This is my personal armistice.”

He was not surprised he had another snub in today’s New Year’s Honours List.

“I don’t think the Conservative Party can bring themselves to accept the truth that if it wasn’t for Ukip none of this would have happened, literally none of it.”

Earlier this week, Mr Farage called Richard Desmond, the ex-owner of Express Newspapers, to thank him for this paper’s 10-year crusade for Britain to leave the EU.

“Today is a great tribute to the Express because once one of the mainstream dailies had backed Leave it suddenly made it easier for the others. Nobody else had the courage,” said the Brexit Party leader.

Mr Farage revealed that he is considering his future now the Brexit campaign is over.

“We have achieved that so I’ve got some big decisions to make as to what I do in the future,” he said.

Next week, the Brexit Party is due to learn the outcome of its application to the Electoral Commission to rename itself as Reform UK.

But Mr Farage has yet to decide whether he will play a key role in the rebranded party.

“I haven’t decided what I’m going to do. I do think the case for political and administrative reform in the UK is very large indeed. There is an awful lot about the way we are governed that needs to be improved.

“Brexit should make all of that easier. But for myself – undecided. The jury’s out as to what I’m going to do,” he said.