Britain fully left the EU at 11pm on Thursday evening after a trade deal was agreed between the two sides on Christmas Eve. The 11-month Brexit transition period came to an end, freeing the UK from the EU’s rules on the Single Market and Customs Union. But French President Mr Macron, a vocal critic of Brexit and of the UK’s negotiating stance with the EU during talks, took one final swipe before Britain fully left the bloc.

He said in his New Year’s address to France: “The United Kingdom remains our neighbour, but also our friend and ally.

“This choice to leave Europe, this Brexit, was the child of the European malaise and of many lies and false promises.”

During his ninth televised address of the year, Mr Macron said the Brexit trade deal agreed with the UK was “defending our interests, our industries, our fishermen and our European unity”.

The French President then stressed the necessity of building “a stronger, more autonomous, more united Europe, before adding: “Our destiny is first and foremost in Europe.” 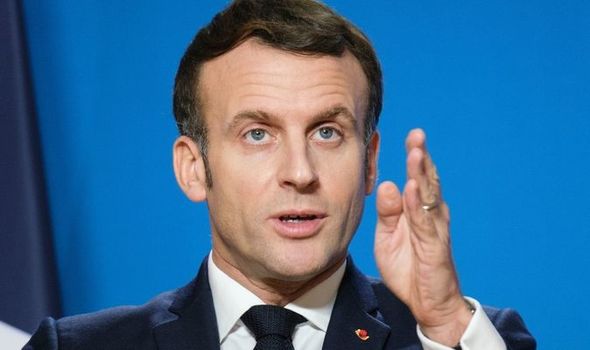 In his own New Year’s Message to the UK, Boris Johnson said: “This is an amazing moment for this country.

“We have our freedom in our hands and it is up to us to make the most of it.”

The Prime Minister insisted there would be no bonfire of regulations to build a “bargain basement Dickensian Britain”, adding the country would remain the “quintessential European civilization”.

The UK has left the EU, and becomes a third country for trade purposes and customs declarations.

New documentation and red tape will now be required between EU member states and Britain, with many warning this will cause severe delays at ports.

Eugene Drennan, President of the Irish Road Haulage Association (IRHA), warned there would be “trouble and chaos” in the coming weeks as systems had not been tested.

“There will be delays, for sure. The mayhem that’s coming in Dublin Port is unbelievable.

“They’ve done nothing to alleviate it. They have a plan that is absolutely nonsensical, and the nature of it and how it is laid out and the structure of it, it is going to cause a lot of grief.

“There will be trouble and chaos.”

7.40am update: ‘We are finally out of the anti democratic supranational institution that is the EU’

Brexiteer and former Brexit Party MEP Ben Habib has tweeted: “This morning is much like any other new year’s dawn. Cold and overcast.

“Oh there is one difference. We are finally out of the anti democratic supranational institution that is the EU.