German financial news outlet Handelsblatt sparked fury for claiming the vaccine is only eight percent effective in people aged over 65. The article added the data had come from an assessment from German government officials that discovered the vaccine is “insufficient” in older people. But this was immediately shut down by AstraZeneca, who said the claims were “completely incorrect”.

A Government source warned this may have harmed any support left in the UK for rejoining the bloc.

They said: “After this, support for Brexit will be at about 90 percent.”

A Whitehall insider ripped into the news report in Germany as they said it was “f** bonkers”, before adding that “you expect it from the Russians” rather than Germany. 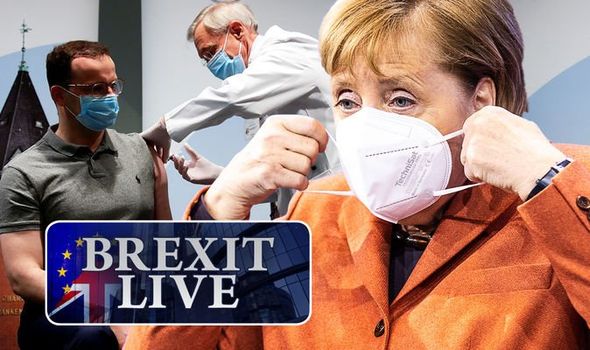 A spokesperson for AstraZeneca said: “Reports that the AstraZeneca/Oxford vaccine efficacy is as low as eight percent in adults over 65 years are completely incorrect.

The story is believed to have been reported Handelsblatt political correspondent Gregor Waschinski, who had the lead byline on the story.

He had tweeted: “We have learned that the German government is considering changes to its vaccination plan due to the possibly insufficient efficacy AZ for elderly risk groups (65+) which German officials estimate at 8 percent.”

He did not confirm where the data had come from.

This comes just hours after AstraZeneca cut its deliveries to the EU by 60 percent, which resulted in Brussels threatening to tighten rules on exports of vaccine doses manufactured in the EU.

Vaccines Minister Nadhim Zahawi quickly reassured that the UK has confidence in its Covid vaccine supplies despite the EU’s threat to ban exports of the jabs.

The AstraZeneca vaccine has so far been approved by the UK’s regulator, as well as other countries such as India and Brazil.

It has yet to be approved by the EU’s drug regulator.